The eight hours of sleep I got each day was the bare minimum for me to have the energy to carry out all my activities. My days at Gashora were packed from day to night, so much that my 30 minute breaks weren't really breaks at all, but opportunities to connect with influential figures from around the world. Individually, the hours of classes and activities seemed to pass by slowly, as I anticipated any free time that I'd have for myself. Whenever we reached another Wednesday, however, I found it hard to believe that it had been yet another week since I've left California. With my first Wednesday back at home, it finally hit me that my amazing experience has come to an end, allowing me to realize I'm a completely different person than who I was three Wednesdays ago. It may sound incredibly cliché that just a few weeks of a different routine completely changes a person, but I can confirm that it is true.

I never really comprehended that I was on another continent, 9000 miles away from home, until I took a step out the gates of the campus. I remember on the ride back from Akagera National Park, almost everyone on my bus was asleep after the long day. I'll admit that I dozed off for a few minutes towards the end, but throughout the ride, I couldn't bring myself to miss all 3 hours of sightseeing in a foreign country, even if it was just looking out the window. Passing by all the scenery brought me so much more depth about my perception of Rwanda; it could not be encompassed by the campus of Gashora. There was so much to see, in both the rural areas and in the city, as waves of green and brown flashed by me. In the midst of all the dust, one room houses built of concrete bricks and cows under a shelter of branches could be seen baking under the sun. The landscape was constantly changing - but the civilians were consistent, at least in their behavior. To everyone I saw, old or young, I would wave. It felt only natural to do so when people on the streets would stop and stare. While this may sound hostile or uncomfortable, that wasn't at all the case with Rwandans, as they would simply wave back. Each one of their waves brought to me a sense of happiness and surprise, because their emotions were reflected so openly in their actions. Some would wave back as if seeing six police escorted buses full of foreigners was nothing new to them. Most of the older folks would wave shyly with a wary curiosity, but genuine and full of grace nonetheless. There were also individuals that were expecting us, mainly consisting of the children. This was the most surprising of all, because they would clutter together and stare wide eyed, but when we passed by, screams of excitement could be heard and their faces would break out into the biggest smiles. My favorite type of wave were those that progressed from a look of confusion, to comprehending what was going on, and finally, throwing both hands up in the air and even blowing kisses until they became just a tiny figure in the background. Although each was unique, to see people performing a universal act of welcome made me realize that ultimately, we are all connected as humans, no matter which country we are from.

I was aware of the culture shock prior to arriving at camp, but I finally experienced its full effect when I realized that most of these people would live their whole life here, while I would be going home to America. All I wanted to do was to sit down with each individual I waved to and learn their story, because I now knew there was so much in the world I've never been exposed to. Even something as simple where they were headed for the day would've differed so much from my daily routine.

My mindset has evolved from always wanting more, to being inspired to take hold of any opportunity I may come across, just because I now recognize I am lucky to have so many. I never fathomed how privileged I was, or how many simple luxuries I took for granted. To see people living and even thriving in such an opposite environment inspires me to utilize all the resources available to me. Now that I'm home, there's no more schedule for me to follow, no rushing to my next activity. With so much time available, I reminisce about all I've accomplished at camp, and try to apply my newfound mentality to everything I do.

The definition of surreal is having the disorienting, hallucinatory quality of a dream; in the most unreal and fantastic way. That is the only word I could use that completely embodies my experience at WiSci2015. 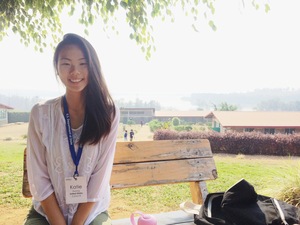 Katie is from Southern California and will be a senior at Arcadia High School. Her hobbies include playing with her dogs, meeting new friends, and learning about how others want to impact the world.