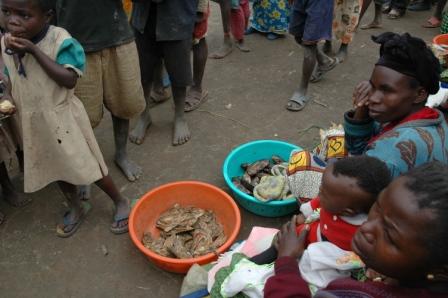 Africa is no more the "Dark Continent" and overpopulated than Iraq was a haven for weapons of mass destruction.

I just hate it when I am bamboozled, swindled, schmoozed, lied to, lulled into submission and otherwise spoon fed what I am supposed to believe by the media. Wake up journalists! The media is falling all over itself and promoting the National Geographic and "conservation" occult agenda of depopulation politics in Africa by publishing and not vetting some simple math in the just-released United Nations Atlas of Africa. I have been to Central Africa and something about the mathematical claims did not ring true.

The cornerstone of the depopulation agenda is allegedly the "protection" of the African environment from the people who live there.

Sounds bad. But what in the heck is a hectare? I know. Do you? Make it your business to know, because the devil is the details. Otherwise we will believe the propaganda that the innocent people of Africa are weapons of mass destruction. We fell for it once. Are you ready to fall for it again?

2.3 billion acres converts to 931,174,089 of those mysterious hectares as the area of the United States.

Do some more math.

In the United States, that means we have .32 people per hectare, or 3.1 hectares per person!

My God! We have the same amount of people per hectare as the poor sons of bitches in Africa. But would we allow the conservation organizations to dictate our land use and population planning?

Based on projections made by the United States Department of Agriculture and the Census Bureau, the American population is projected to increase to 392 million by 2050 -- more than a 50 percent increase from the 1990 population size.

Amazing. We look to be worse off than Africa, but no one is shoving Depo Provera down our collective throats like the conservation organizations are doing in Africa.

International depopulation politics rules the African continent. Consider that the population is barely sustainable with an average live span of 45, and in some places less than that.

"It's no secret that millions of native peoples around the world have been pushed off their land to make room for big oil, big metal, big timber, and big agriculture," wrote Mark Dowie in a courageous and prescient article in Orion magazine.

Africa is a huge continent and most people do not get that. Why?

Our map mystique begins with the Mercator projection. At the time of its creation in the mid-sixteenth century, the world was being conquered by sea, and sailors needed a map that would accurately show direction and distance. Latitude and longitude were plotted on a straight line, as if the earth was flat, and this incorrectly sized Africa in comparison to the "civilized" world. A good example of the shortcomings of the Mercator projection map is that the island of Greenland appears to be about the same size as Africa, when the land of Kong is actually fourteen times the size of little, mis-named frozen Greenland.

In 1974, Dr. Arno Peters developed a map that puts Africa in its proper perspective with the rest of the world. Africa is visually a giant compared to Europe or North America. When Peters unveiled his map at a European conference, it created angry debate in the world press as the white world suddenly felt small compared to big, black Africa.

As the myth of a flat world finally died with Columbus and his three conquering ships, the world was proven round once and for all, and attempts to represent a three dimensional sphere on a two-dimensional surface simply would not suffice any longer.

Next came the maps offered by the National Geographic, tucked and folded inside the cover of the familiar yellow magazine--maps that point our thoughts away from present exploitation of the underprivileged world and into the romanticized yet primitive past. The archeological maps, the ancient mariner's maps, even the modern oil map of Africa, according to the version put forth by National Geographic, are indisputably incomplete.

Finally, Hollywood gave us the mythological maps of King Kong and Indiana Jones and our undereducated population believes everything it sees in the movies.

In Central Africa, conservation organizations have been stitching together vast tracts of territory defined by the CARPE Program--the Central Africa Regional Program for the Environment--as "landscapes." These include the Maiko National Park (NP) of North Kivu (CARPE landscape No. 10) and the Kahuzi Biega National Park (CARPE landscape No. 11) that stretches from Bukavu, South Kivu, to the vast tropical forests of North Kivu.

The twelve CARPE landscapes encompass 680,300 square kilometers (68,030,000 hectares) of Central African land. From the Monte Alen-Monts de Cristal National Park (CARPE landscape No. 1) in Equatorial Guinea, to the Virungas National Park (CARPE landscape No. 12) in the Great Lakes region, the twelve "priority" biodiversity landscapes, stretching across Central Africa, are part of a vast forest of "conservation" initiatives defined by acronyms and big institutions. The Congo Basin Forest Partnership, for example, like CARPE, is connected to the Pentagon, and NASA.

This information is easy to find and does not require much brainpower, or a huge research staff.

John P. Oates (Myth and Reality in the Rainforest), not no be confused with Hall and Oates, criticizes the linkage of nature conservancy with economic development as a profound mistake, which leads to "an exercise of materialism at local, national and international levels."

The word "sustainable" in this context means to use natural resources in a paradigm of unlimited economic growth--and to "sustain" access to them for Western interests in their ruthless global competition for disappearing resources.

In a telling memo written in December 2004, Robert Hellyer--USAID Mission Director for DRC--wrote to the USAID Africa Bureau in Washington regarding the Central Africa Regional Program for the Environment (CARPE), the "principal vehicle for United States participation in the Congo Basin Forest Project."

"Of the more than 60 million people that live in the region," Hellyer wrote, "about 22 million are located in urban areas. At present rates of population growth, the region is expected to contain 150 million people by the year 2025. Population density is on the whole quite low, with a regional average of 14 persons per square kilometer. " (100 hectares) Do the scary math and you get .14 persons per hectare as the regional average in Central Africa--and Central Africa is where the big conservation land grab is happening. Do the math and there is a whopping 7.14 hectares per person in Central Africa! That is more hectares per person than the US average of 3.1!

Buried in the February 2006 Annex of the supporting documents for the report of the Weidemann Consortium--an evaluation of the CARPE program in Central Africa--is the admission that the rational of "overpopulation" was bogus. For all the satellite sensors, the population control programs, the hand wringing by UNESCO and Conservation International and Fauna and Flora International and Richard Leakey's ranger-training operation called Wildlife Direct--the alphabet soup of "conservation" organizations gathering like hyenas for the kill of land grabs in Africa, "the population density is on the whole quite low."

Robert Hellyer elaborates on the global demand for petroleum and timber, and on the adverse impacts of human populations in a landscape--Congo--where "it is in the self-interest of the United States government" to support "sustainable development" in the region. Hellyer confirmed that CARPE and USAID are not interested in the Congolese people, or even biodiversity protection, but only in the interests of the United States.

I have been there. It is beautiful. It is ancient and it is in grave danger--not from the local villagers, but from conservation, mining and strategic interests.

I will say it again. Africa is no more the "Dark Continent" than Iraq was a haven for weapons of mass destruction.

Do not allow the media and especially General Electric owned NBC news which recently gave free publicity to bogus conservation interests in the Congo, to pull the wool over the American consciousness.

The land grab from native populations in Africa will make the horrific genocide perpetrated upon the American Indian pale by comparison.

Villagers in Africa will find themselves on reservations, euphemistically termed "preserves" if we do not wake up.

I could go on and on, but I already have.

Google "King Kong" and glean what you will.

Cross posted to OEN because this is important!