"The title of the exhibition is 'Exformation,' as in the negative of information," the Poland-born, New York-based artist explained in a phone conversation with the Huffington Post. "I would like viewers to realize that when they are given information it almost always contains exformation, there is something negative there we can't see."

When information is compressed, censored, revised or edited, a layer of lost information hovers over the lasting knowledge like a ghost forming an invisible reality that most of us will never see nor realize. "The information we get is just a fragment of what is actually there." 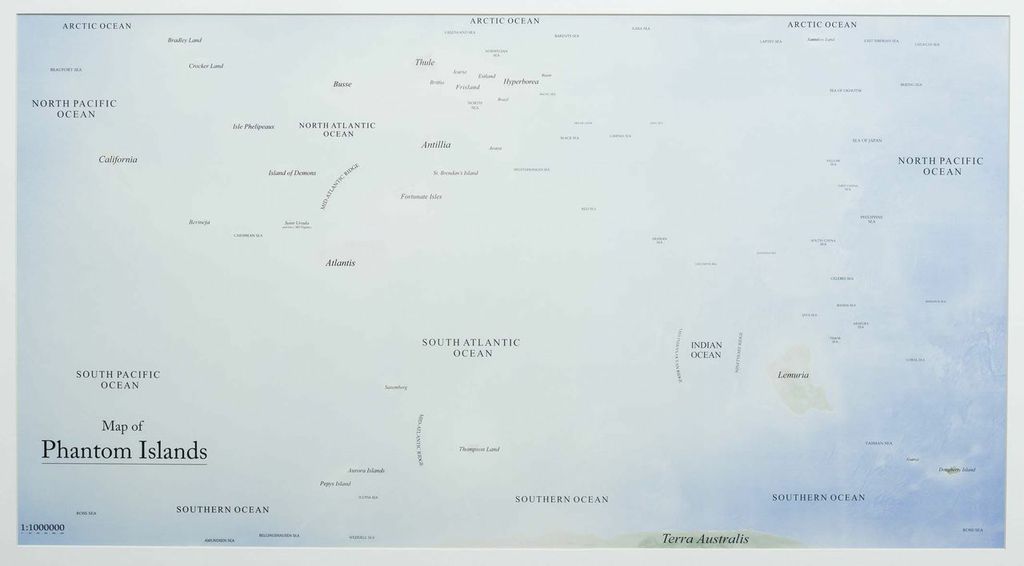 This thread of phantom occurrences appears throughout Kurant's explorations, which range from cartography to film to politics. One series, entitled "Map of Phantom Islands," navigates maps of largely uncharted islands -- floating bodies of land that have wedged a spectral spot in the world's geography. Some were originally mirages, others forged by explorers with political agendas, and although none of the depictions have any corresponding locale to back them up, some have verged on starting very real wars.

"It's a little bit like thinking about that volcanic cloud over Iceland," she said. "It's just a cloud but it yields effects."

Another branch of the project, called "Phantom Library," takes up imaginary books included in novels by authors like Philip K. Dick, Roberto Bolaño and Jorge Luis Borges. Some are mentioned in passing, others more fully fleshed out. Kurant turns these specters of the literary canon into real, marketable goods, creating physical books without text, yet with barcodes and ISBN numbers. Kurant uses established information about each book to create a book jacket summary and manufactures each book using a mass printer, making each work not so much a precious sculpture as a mass produced, marketable good. 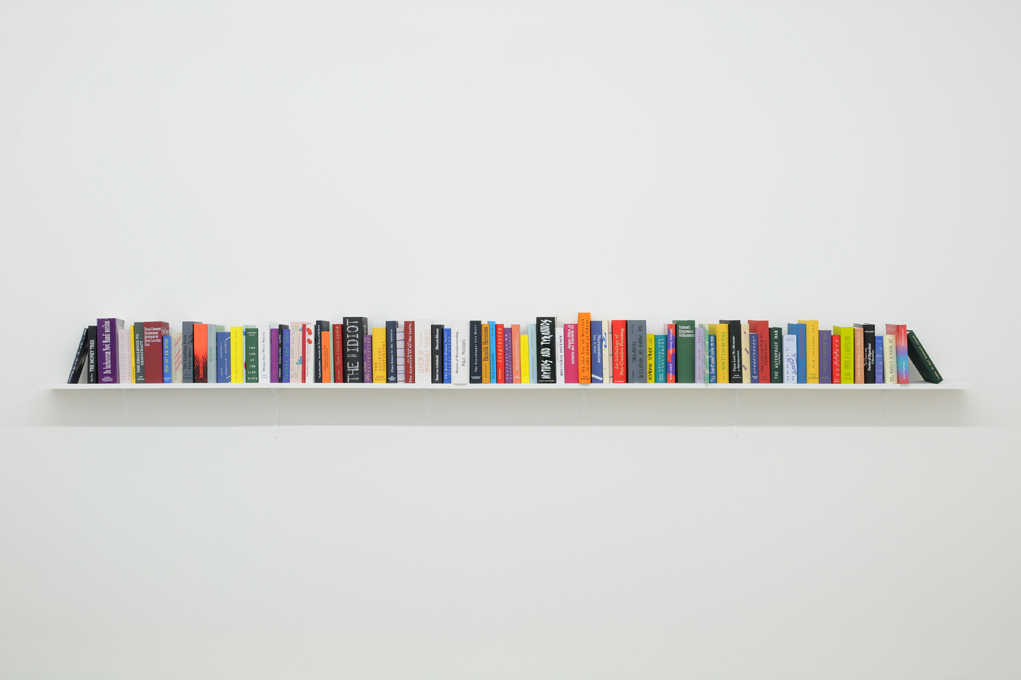 For the second stage of the project, Kurant has enlisted real authors to actually physically write the imaginary books. "I'm interested in this idea of thinking of works as living organisms that have certain agency and autonomy. After they are created there is some kind of transformation and freeing themselves from their authors -- there is a loss of control over the works."

Though they may not be completed for years, eventually the imagined books will sell at local bookstores with all the regular, non-fictitious novels, retroactively giving material shape to the book-shaped-ideas created in the minds of Borges et al years ago.

"Fiction is often a very good means to go about rendering some kind of truth," Kurant explained. "Very often we use a good amount of fiction to achieve an end result of truth that is closer to how reality works. When you think of the truth contained in a Dostoevsky novel it is a truth that is universal and real as opposed to a book chronicling some kind of war that is made of facts, but the end result is a fiction." 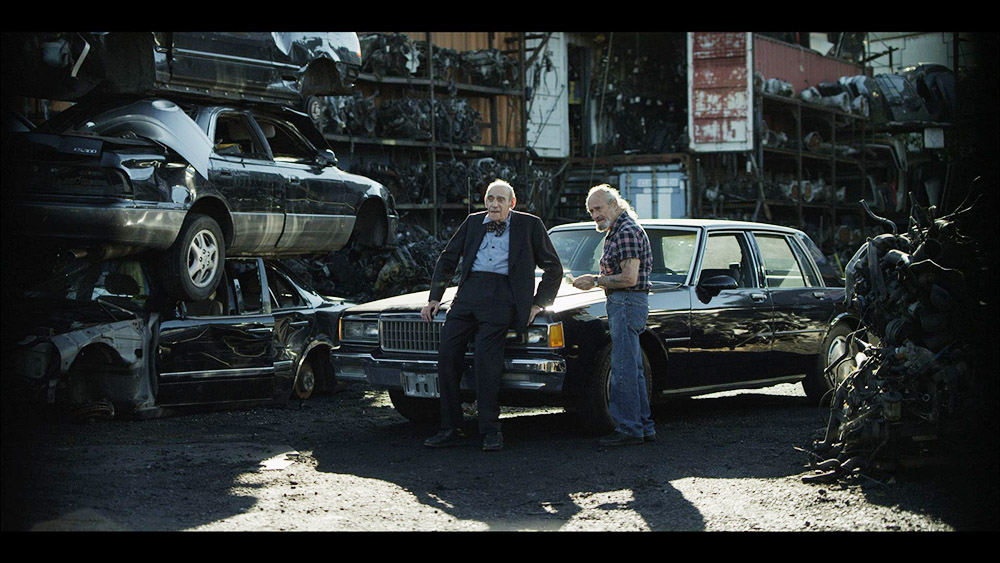 In "Cutaways," Kurant switches gears from literature to film, placing attention on work, characters and credits that never make it to the screen. "There is an entire parallel invisible reality about which most of us will never know that involves a lot of people working without being credited, things being hidden, compressed."

In collaboration with renowned film editor Walter Murch, who worked on "Apocalypse Now" and "The Godfather," Kurant created a short film with characters who had been completely erased from noted films. The short stars Charlotte Rampling, Abe Vigoda and Dick Miller who were once cut out from "Vanishing Point," "The Conversation" and "Pulp Fiction," respectively. For instance, Kurant's vision gave Vigoda, now 92 years old, the opportunity to revive his character from Francis Ford Coppola's 1974 film.

"Cutaways" creates an alternate film universe where erased humans are given a second chance and are free to interact with each other. 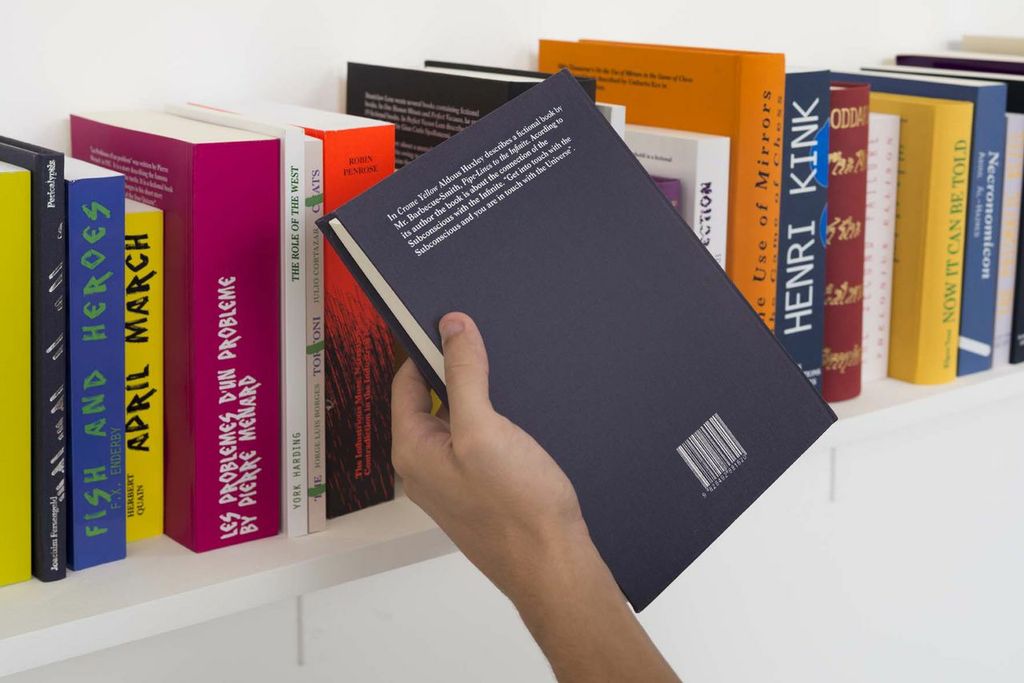 Kurant explores the presence of silence in another piece inspired by fiction, in this case a 1955 short story by Heinrich Boll, entitled "Murke’s Collected Silences." The story follows a man who splices, combines and collects recorded silences -- pauses, breaths and moments of thought, later playing them back for his listening pleasure. Kurant's piece collages silences grabbed from political speeches, though, when juxtaposed against each other, the lack of sound forms its own kind of presence. Describing the process of creating a radio transmission from a reel-to-reel tape player, Kurant expressed the ability to mentally sketch the size and shape of the spaces in which the various sounds were recorded -- each silence, was, in a way, a portrait of its setting.

"Every single system is always producing its negative," Kurant said. "Trying to interpret the world logically can often lead us to experience a fictional version of reality. I'm trying to do the opposite. I'm exploring uncertainty, black swans, unknowns, to exceeds the limits of knowledge to paradoxically get closer to the truth about reality... Art offers a way of exploring history, science, an unorthodox way that can kind of inspire paradoxical thinking that are different from the methodology of science and history."