One would be excused for suspecting that Aidan Dwyer, said to be 13, is in fact a small, very young-looking, 37-year-old college-educated con-man of the highest order. Such is not the case though for what the young Long Island lad has accomplished in a feat typically associated with much older individuals. As reported on the Patch community website out of Northport, N.Y., Aidan has used the Fibonacci sequence to devise a more efficient way to collect solar energy, earning himself a provisional U.S. patent and interest from “entities” apparently eager to explore commercializing his innovation.

And you’re wondering what the Fibonacci sequence is. Aidan explains it all on a page on the website of the American Museum of Natural History, which recently named him one of its Young Naturalist Award winners for 2011. The awards go to students from middle school through high school who have investigated questions they have in the areas of biology, Earth science, ecology and astronomy. 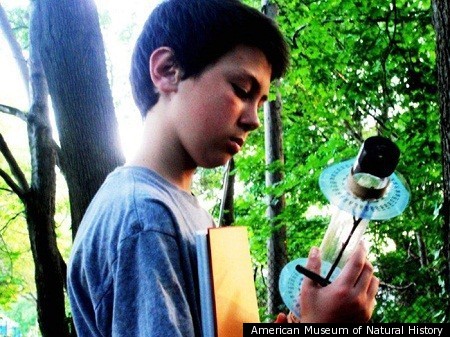 So back to the Fibonacci sequence: Starting with the numbers 0 and 1, each subsequent number is the sum of the previous two – 0, 1, 1, 2, 3, 5, 8, 13…. These numbers, when put in ratios, happens to show up in the patterns of branches and leaves on trees. Aidan, having been mesmerized by tree-branch patterns during a winter hike in the Catskills, sought to investigate why. His hunch: “I knew that branches and leaves collected sunlight for photosynthesis, so my next experiments investigated if the Fibonacci pattern helped.” 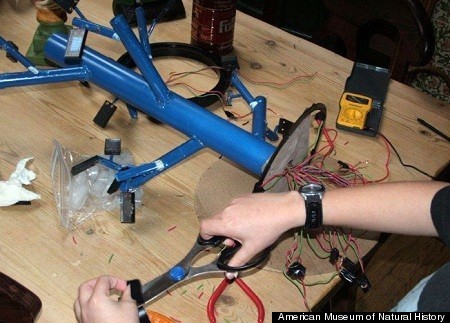 One thing led to another, and before you know it, this kid, three years from being eligible for a driver’s license, had built a tree-like stand affixed with small solar panels in the Fibonacci pattern. He compared its ability to collect sunlight to a flat-panel collector. And Nature won.

Summing up his research and imagining the possibilities, Aidan wrote: “The tree design takes up less room than flat-panel arrays and works in spots that don’t have a full southern view. It collects more sunlight in winter. Shade and bad weather like snow don’t hurt it because the panels are not flat. It even looks nicer because it looks like a tree. A design like this may work better in urban areas where space and direct sunlight can be hard to find.”

Among the key problems with Aidan’s report, it appears, is that he wrongly used voltage as a measure of the power output from his solar panels. In his Smart Planet story, Nguyen interviews UC San Diego’s Jan Kleissl, a professor of environmental engineering, who says had Aidan actually measured the current, he would have gotten much less impressive results.