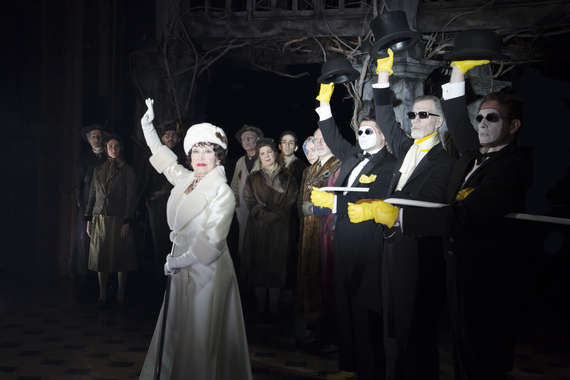 Chita Rivera in Kander & Ebb's The Visit. Photo: Thom Kaine
It's a funny thing about unproduced musicals. Many are instantly disposable and disposed, but we are here talking about unproduced musicals by Broadway giants. Shouldn't anything written by the likes of Rodgers, Sondheim, Styne, Loesser or Kander & Ebb automatically deserve production? For curiosity's sake, yes. But practically? Looking through the annals, we find very few musicals--unproduced or effectively abandoned after an unsuccessful tryout--which, upon arriving more than a decade later, proved their worth.

The occasion of this discourse is the new musical by the final names on the list above, The Visit, which opened tonight--finally!--at the Lyceum. The musical, with a book by Terrence McNally (who had previously collaborated with Kander & Ebb on The Rink and Kiss of the Spider Woman, both starring Chita Rivera), was initially written in the last century. Work started in 1998 or so, and it was announced for a March 2001 Broadway opening with direction by Frank Galati (just after Ragtime). The key to the project: the Broadway return of four-time Tony Award-winner Angela Lansbury. The star withdrew when her husband became ill, though, and it was impossible to raise the money without Angela.

Plan B was to mount the show the following September at the Goodman Theatre in Chicago, with Chita appearing opposite John McMartin. The reaction was decidedly mixed, and prospective backers for the hoped-for Broadway transfer vanished. Eventually, an off-Broadway production at the Public Theater was arranged for the fall of 2003, to be headed by Rivera and Frank Langella. Even with the relatively modest budget, money couldn't be raised and the project was canceled. If the more bankable Lansbury was reapproached following the death of her husband in 2003, she never accepted the role.

In 2008, yet another regional production was mounted, with Rivera and George Hearn, at the Signature Theatre in Arlington, VA. (Ebb died in 2004, having seen The Visit in the full-scale 2001 production and worked on changes for 2003.) The reaction was decidedly mixed, and prospective backers for the hoped-for Broadway transfer vanished. The show shifted back into limbo until 2014, when director John Doyle signed up for yet another prestigious regional theatre production, at the Williamstown Theatre Festival. Rivera--who had been in her late 60s during the Chicago Visit--returned to the role, this time opposite Roger Rees. The reaction was decidedly mixed, but this time--presumably due to the significant financial success of McNally's It's Only a Play--The Visit finally secured a house, raised its money, and reached Broadway. 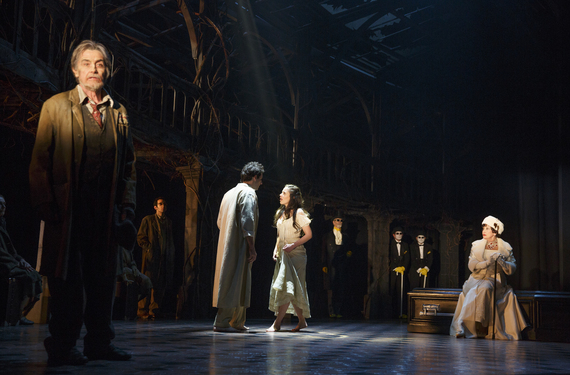 Roger Rees, John Riddle, Michelle Veintimilla and Chita Rivera in Kander & Ebb's The Visit. Photo: Joan Marcus
Not having seen the show in Chicago or Arlington or Williamstown, it is impossible to make comparisons. But the piece at the Lyceum appears to have the same flaws that have been pointed out, again and again, in the prior productions. I'm glad for the sake of Mr. Kander--and the memory of Mr. Ebb--that this show has reached town. Triply so, as one of their other long-in-gestation shows, The Scottsboro Boys, proved a triumph when it reached the Lyceum in 2010. Not a commercial success, but in my view very much triumphant.

But The Visit left me uninvolved. The show has a few high spots, at which point you stop and say "ah! A Kander & Ebb musical!!" But these number about four. The rest of it, in my view, falls exceedingly flat. It is difficult to imagine how a Kander & Ebb musical starring Chita Rivera based on a provocative play like Friedrich Dürrenmatt's The Visit can be just plain dull. The answer, though, is presently on display. It will no doubt leave more than a few viewers overwhelmed and enthralled, and I'm thrilled when any patron leaves any Broadway show walking on a proverbial cloud. But not me, not this time.

The root problem seems to be in the initial concept. Why not make a serious, artistic musical out of Dürrenmatt's The Visit, a striking post-war indictment of greed and materialism? The plot tells of ultra-rich Claire Zachanassian, who returns to the bankrupt town of her birth and offers the residents one billion marks on one condition: they must murder her long-ago lover, Anton Schell. Kander, Ebb and McNally presumably all saw the original 1958 Broadway production of the play, starring Alfred Lunt and Lynn Fontanne, produced as the inaugural attraction at the Lunt-Fontanne and directed by Peter Brook.

Since this report is tending towards the historical rather than the critical, let us borrow a few words from the 1958 reviews. Richard Watts of the Post called it "absorbingly sardonic" and "surely one of the most savage dramatic studies of greed since Ben Jonson's Volpone." Walter Kerr of the Herald Tribune noted how the play "slowly, almost imperceptibly, winds its grim threads around your throat" and makes your flesh crawl. Brooks Atkinson of the Times called it "macabre," "ghoulish" and filled with "cold fury" and "cruelty."

That is the play that Kander, Ebb and McNally had in mind, and that is the effect they presumably were trying to replicate. But where are those elements--any of those elements--in the musical at the Lyceum? The adaptation necessarily cut down what was presumably a three-hour play into about forty minutes of libretto, to make room for songs in the intermissionless ninety-five minutes. Most damagingly, the balance between the two leading characters was altered when it was decided to make this a star vehicle for Angela (and, later, Chita). Judging by the 1958 reaction, the role of Anton was dominant in that throat-gripping production; Lunt's reactions as greed turned his long-time friends against him made this performance the capstone of his career. The near-obliteration of the character of Anton in favor of the leading lady, in retrospect, might well be the musical's fatal misstep. 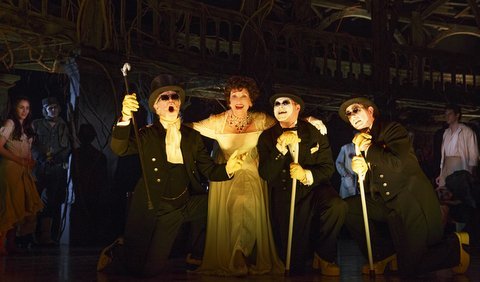 Tom Nelis, Chita Rivera, Chris Newcomer and Matthew Deming
in Kander & Ebb's The Visit. Photo: Joan Marcus
What remains--from my seat on the aisle, anyway--is non-gripping, non-chilling and non-savage; a toothless shell of the Dürrenmatt, with the bite removed. We do get four characteristically interesting Kander & Ebb songs ("I Walk Away," "You, You, You," "I Will Never Leave You," "Love and Love Again"), and the 82-year-old Chita in what could well be her final Broadway musical.

Not enough. An interesting show, to be sure; but in this crowded April, with at least ten intriguing new productions on view, I wonder whether this Visit is quite worth the visit.
.
The Visit, with music by John Kander, lyrics by Fred Ebb and book by Terrence McNally, opened April 23, 2015 at the Lyceum Theatre