Alan Eustace, a senior vice president at Google, set a new world record today by completing the highest-altitude skydive yet--parachuting from 135,908 feet (or 25 miles) above Earth.

The record was previously held by daredevil skydiver Felix Baumgartner, who leaped from 24 miles above Earth in October 2012.

To put that in perspective, scientists say you officially enter space at 73 miles above Earth's surface. That's pretty high up--and Eustace was about a third of the way there.

Eustace gets lifted to his peak altitude of 135,908 feet via a high-altitude ballooning system.

Eustace reaches a peak speed of 822 miles per hour during his dive.

Eustace lands after a 4 1/2-minute free fall, the AP reported.

“It was amazing,” Eustace told The New York Times. “It was beautiful. You could see the darkness of space and you could see the layers of atmosphere, which I had never seen before.”

A high-altitude, helium-filled balloon from Paragon Space Development Corp. and its Stratospheric Explorer (StratEx) team lifted Eustace to his peak altitude, according to a written statement from the company. Eustace wore a self-contained spacesuit as he cut himself loose from the balloon with the help of a small explosive device, and dove toward Earth at a peak speed of 822 miles per hour, the Times reported.

Jim Hayhurst of the U.S. Parachute Association was the jump's official observer, the Associated Press reported. He told the AP that the team on the ground could hear the sonic boom as Eustace broke through the speed of sound barrier.

Eustace's supersonic jump came as a big surprise since he had been secretly planning the dive with Paragon Space Development Corp. and its team. The company, which specializes in extreme environmental control systems, initiated the project with Eustace and worked with him to develop, build and manage the system used during the incredible leap. 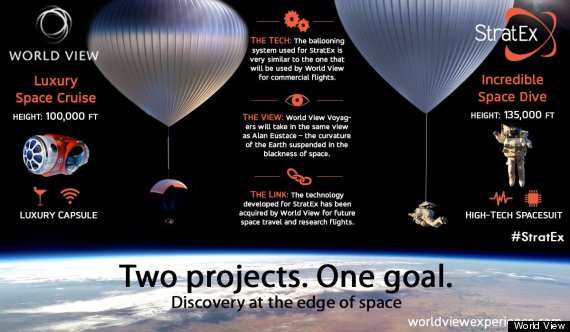