The American Legislative Exchange Council (ALEC) has been described as a "shadowy group" of companies and politicians working behind closed doors to rewrite our laws, frequently to bolster corporate profits at any cost. Over the last 41 years, ALEC has worked tirelessly to tear down many of the programs and protections Americans, particularly seniors, have come to rely on, and only recently have many of their objectives come to light.

ALEC doesn't just exist in the backrooms of Washington, D.C.; they're also in the backyards of every community in every state, pursuing their agenda at the state and local level. When these representatives and corporations sit down at the table to craft "model" legislation, middle-class Americans don't win.

These pieces of legislation are uniformly disastrous for retirees and anyone who hopes to retire one day. They include initiatives to wipe out public pensions systems in favor of private 401(k) plans, regardless of how well the public pension is doing. Policies like this not only scapegoat and attack public services, public workers and collective bargaining but expose workers to higher fees, which go straight into the pockets of Wall Street bankers. 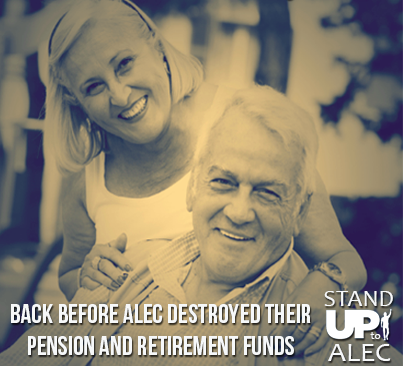 ALEC hasn't been content to stop with public pensions either; they continue to push for privatization of Medicare and Social Security, which would effectively end these programs as we know them. This push to hand over our most crucial earned benefits to the very same individuals who helped to engineer the financial crisis of 2007 is unacceptable.

ALEC isn't invincible. The efforts of individuals across every state to shine light on ALEC's actions have produced clear results. Dozens of lawmakers have withdrawn their ALEC membership within the last few years. ALEC legislation has met with tough fights state by state, and it's just beginning. Protecting corporations' bottom lines at taxpayer expense has gone too far. It's time to expose ALEC.

Learn about "Stand Up to Alec" here. Spread the word on social media here.