Life in the Boomer Lane, in an attempt to not write about the Republicans vying for the Presidential nomination, was in danger of coming up blank for this blog. But, knowing that legions of fans out there have come to depend on starting their days with LBL's sophmoric humor, she perused her current isuue of The Week, in an attempt to find something (anything) to write about. What she found was potentially more important than The Middle East, climate change, the demise of the middle class, or the earth-shattering controversy over Ted Cruz being born in Canada.

UFOs. Even writing this conjures up scenes of 1950s B movies, involving invasions of small American towns populated mainly by a scientist, his hot, young, blond daughter and some random young hunky guy. For decades, the controversy over UFOs has swarmed in the background, while we have innocently turned our limited attention spans elsewhere. If these UFOs are spaceships, and, if these spaceships are crammed with aliens (the Outer Space variety, not the raping and pillaging variety, from South of the Border) who are planning anything nefarious for us, the jig is up. Their days are numbered.

Enter Hillary Clinton. According the The Week, Clinton told a New Hampshire newspaper that she would "'get to the bottom' of the mysteries surrounding UFOs. 'I think we may have have been visited already,' Clinton said. "We don't know for sure. 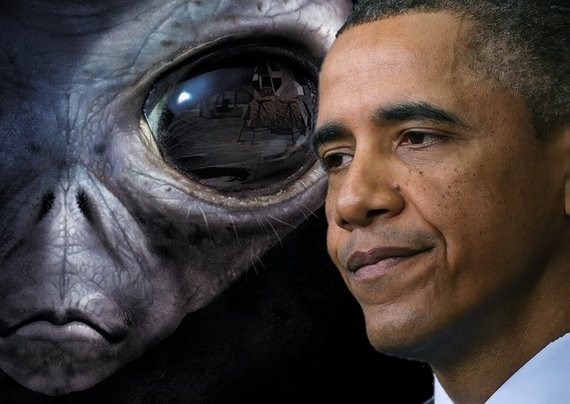 LBL isn't now going to make a case for the existance of life, other than ours. Anyone with one functioning brain cell who is aware of the billions of galaxies that populate the universe and looks at our less-than-miniscule solar system, and still declares that we are the only life in the universe, hasn't been using his one brain cell to the best advantage.

LBL will now exit the controversy over the meaning of UFOs and the possibility of life outside our own planet. She will only say that, at this very moment, she believes that the chances are overwhelming that there are other Presidential campaigns underway, in galaxies far, far away. She can only hope that their campains have better things to spew about than building walls, demonizing entire populations of people, and giving terrorists the right to bear arms.

And now she will apologize to her readers. She tried. She really tried. She just wanted to write about UFOs, not the Presidential campaign. And, if any extraterrestrials are reading this, she apologizes to them, as well. Your political campaigns are probably saner than ours. It's that thought that allows LBL to sleep at night.