WASHINGTON -- Anyone who's ever worked filling orders in an Amazon warehouse knows the drill: Once your shift is over, you must stand in line and wait to be screened for stolen goods before you can leave. The process can take 20 minutes or more depending on how busy the warehouse is, and you don't get paid a dime for the wait, according to numerous lawsuits.

Workers across the country have sued to be paid for that time, and now they'll have their day at the Supreme Court, where oral arguments in Integrity Staffing Solutions v. Busk are expected to begin this Wednesday. Integrity, the temp firm that helps staff Amazon's warehouses, is arguing that the screenings aren't "integral and indispensable" to the work, and that therefore it shouldn't have to pay workers for the time.

In a narrow sense, the legal question being debated is whether or not these workers deserve to be paid for the time it takes to go through a theft search, said Eric Schnapper, a law professor at the University of Washington who's part of the team representing the Integrity workers. But the broader and more significant question, he said, is whether or not an employer can require you to do other tasks deemed nonessential to the job -- for free.

"The argument is that once your shift ends, the employer has the ability to require you to do other things on the pain of dismissal and does not have to pay you," Schnapper said. "You could imagine all sorts of things."

When warehouse workers Jesse Busk and Laurie Castro first sued Integrity in 2010, they argued that the theft screenings should be compensated as work under the Fair Labor Standards Act, the law setting minimum wage and overtime standards. They noted that the waits were often 25 minutes at their Nevada warehouse.

Busk told The Huffington Post last year that he earned $11.60 an hour working the day shift at the warehouse and $12.35 working nights. As a temp, he didn't get any health care coverage or paid leave. He spent his 12-hour shifts scampering around the distribution center filling orders. At the end of the shift, all he wanted to do was hop in his car and get out of there. Instead, he had to wait in a screening line.

"You're just standing there, and everyone wants to get home," Busk, 37, said at the time. "It was not comfortable. There could be hundreds of people waiting at the end of the shift."

Busk's team argues that the workers have no choice but to wait and go through the theft screening, which is ultimately for the benefit of Amazon and Integrity, not for the workers. Therefore, they say, the workers should be paid for the time.

Integrity's position in the case compares the theft screening to the time workers spend walking to their work stations -- time for which, according to other court decisions, workers aren't entitled to be paid.

An Integrity spokesperson could not be reached for comment.

The company has found a surprising ally in this fight: the Obama administration. In June, officials with the Justice and Labor Departments filed an amicus brief in support of Integrity's position in the case.

"I was frankly pretty shocked to see the administration was on the side of the employer," said Catherine Ruckelshaus, general counsel at the National Employment Law Project, an advocacy group for low-wage workers that has applauded much of the White House's other work on labor issues.

The Obama administration has often said that low-wage workers in the U.S. deserve better pay and better treatment, and President Barack Obama has issued a number of executive orders aimed at raising wages for low- and middle-income workers. Meanwhile, the president's labor secretary, Tom Perez, is out stumping for paid family leave and a federal minimum wage of $10.10 per hour, nearly $3 above the current level.

An amicus brief is more a legal reading of current law by the president's solicitor general rather than a statement of White House policy priorities. Nonetheless, Joshua Buck, another lawyer for the workers, says the brief runs counter to the president's broader economic agenda.

"It's particularly ironic considering how the Obama administration is talking about increasing the availability of overtime [pay] for people," said Buck. "These are low-wage workers here, and [the administration] is basically saying they shouldn't be paid while they're held captive. It's mind-boggling to me."

The brief has put the White House in an unusual position in the Busk case -- it is standing alongside the Chamber of Commerce and the retail lobby and against the AFL-CIO labor federation.

The White House declined to comment on the brief.

According to Schnapper, the impact of the Supreme Court case could go well beyond Amazon's distribution workforce. Depending on how broad the ruling is, a decision against Busk could essentially lead to more off-the-clock work, he said.

By way of example, Schnapper said a retailer could perhaps decline to pay a cashier for the time spent tallying the cash in the register at the end of the day, on the grounds that it isn't a vital part of the job.

"You could be told at the end of your shift at The Huffington Post to go close the windows and take out the trash," he said. "There are lots of things they could have you do and save money by doing that … It would mean pay cuts for a lot of people."

A spokesman for Integrity said the company wouldn't discuss an ongoing case.

An Amazon spokeswoman emailed, "We have a longstanding practice of not commenting on pending litigation, but data shows that employees walk through post shift security screening with little or no wait." 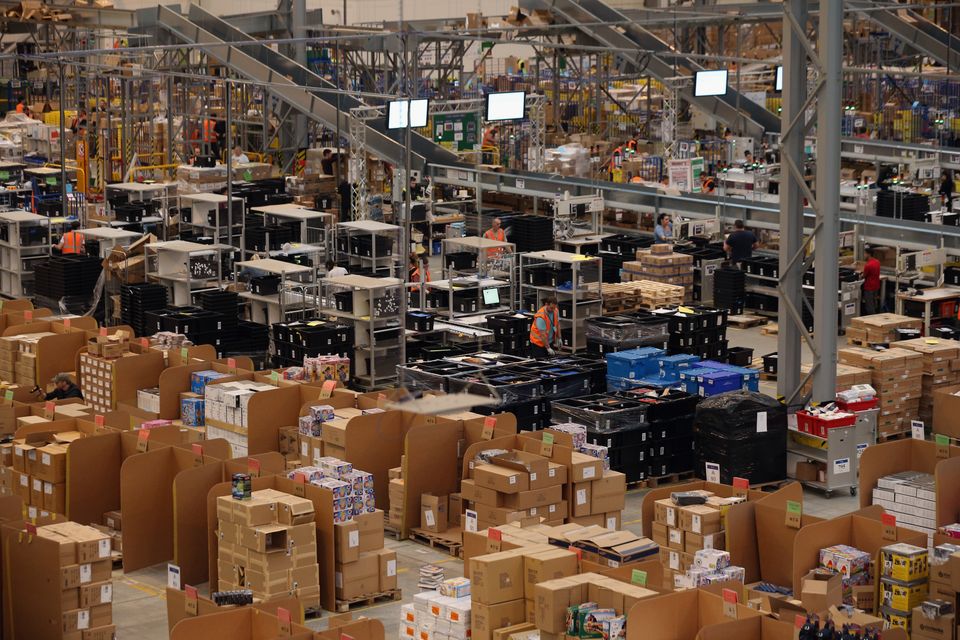 1 / 25
Online Retailers Amazon Prepare For Cyber Monday
PETERBOROUGH, ENGLAND - NOVEMBER 28: Employees select and dispatch items in the huge Amazon 'fulfilment centre' warehouse on November 28, 2013 in Peterborough, England. The online retailer is preparing for 'Cyber Monday', as it predicts the busiest day for online shopping in the UK will fall on Monday December 2nd this year. On Cyber Monday in 2012 amazon.co.uk recorded over 3.5 million individual items ordered, which equates to 41 items purchased per second. The Peterborough fulfilment centre is 500,000 sq ft, equivalent to approximately seven football pitches in floor area. Amazon are due to employ more than 1,000 seasonal staff to cope with increased demand in the run up to Christmas. (Photo by Oli Scarff/Getty Images)
Getty Images