I do want to apologize and say this blog post today may be anything but short. However, you all in the HuffPost blogosphere look smart, so I am sure you can handle it. I wanted to use this blog post to do a couple of things:

So, firstly, let's talk a bit about power. To do that, I am going to pull out the aforementioned teaching tool I have dubbed "Ambiguous Power Guy." Let's take a look at him: 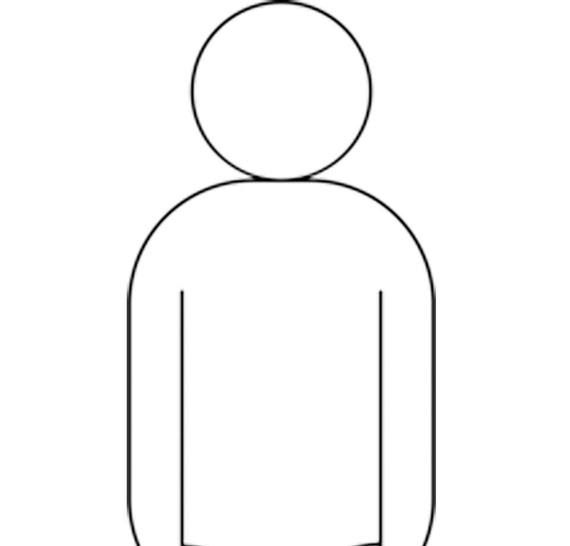 So, at first blush, APG ain't nothing much to look at. He's kinda dull, just sitting there looking back at us. But let us imagine for a second that APG is someone in a position of power, like a typical bank CFO, a university president, or a judge. How do we envision the typical person in positions like these to look? What identities would they tend to take up, and what values would they espouse? Think of all those social markers in your brain, and we can fill him in together. Can we agree that the majority of people in these positions are cisgender men? Can we agree that most of the folks in these positions are white? What else? Do we assume that they went to college? Grad school? In what socioeconomic class do we imagine them to have grown up? As we start asking ourselves these general questions, we get a better sense of what power may look like in our society: 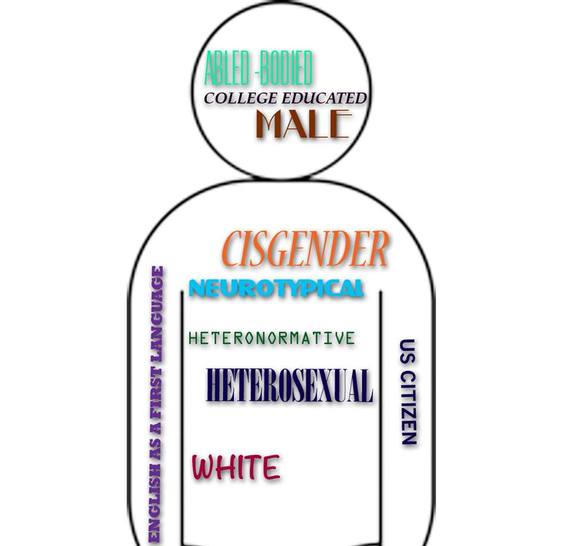 Now, these are just a few of the categories that may come up. Take a look and really meditate on it. Here is what most of those in power look like in our society. If any of these words (among others) fall into alignment with any of our own identities or value sets, then we have a privilege. We have a privilege because folks in power are thinking through a particular vantage point that keeps people like us in mind. For example, even though I am a person of color and transgender, I can say that I am able-bodied and considered to be neurotypical, like most folks in positions of power. Got it? Good. Feel free to use this model if it is useful to you.

Next, let's imagine ourselves as part of the larger mainstream LGBTQ movement. Who is most likely to be impacted by anti-LGBTQ discrimination? I'm sure you have read all the articles and research from folks like GLAAD, the Task Force, HRC, etc. Generally, folks most at risk for housing, job and education discrimination in addition to violence tend to be working-class folks, people of color, and transgender and gender-nonconforming folks. Specifically, trans women of color tend to be most at risk.

Many of you are reading this and are like, "Mase, seriously, you ain't teaching me nothing new." I just want to connect some serious dots for you before we get into the meat of this post. OK, so now that we have defined what power typically looks like in our society and who is most at risk for anti-LGBTQ discrimination, I have another question for you: Do the folks heading up our mainstream LGBTQ organizations have more in common with the typical folks in power? Or do they tend to have more in common with the folks most impacted by anti-LGBTQ violence? If you have been really paying attention, you would know that of course they tend to have more in common with folks who are in power in most of our society. So what does this mean? This means that a large portion of mainstream LGBTQ organizations is not truly invested in dismantling the very systems that cause and inflict the most damage against LGBTQ folks because they themselves have not often felt it on a large scale.

Think about it. Let's go back to the stats on trans women of color. For the last eight years I have worked in a variety of LGBTQ organizations as an out black, transmasculine person whose job was often to provide training on LGBTQ community. I'd see many LGBTQ and non-LGBTQ organizations spit out statistics very quickly and keep reiterating the same information and who was most at risk. Yet how many trans women of color did these organizations hire? How many did they recruit to be on their boards of directors? If they were hired, were they only put in place to fill a need for some temporary grant they got funding for? How does mainstream LGBTQ organizations refusing to hire trans women of color perpetuate homelessness? Joblessness? Access to health care and education? Believe that link is very real. Knowing something intellectually and feeling compelled to do something about it are very different things.

Within the many spaces I have worked, I've observed many "microaggressions" and behavior that perpetuates the continuance of anti-LGBTQ behavior against trans and queer people of color. Keeping these organizations anonymous (because I do not think they are unique but part of a larger systemic problem), I am going to share with you all some quotations from former people in leadership at these organizations as well as the further implications of such.

This was a question from my executive director at the time. A trans person was the top candidate for a particular position we were hiring for, and at some point, before a final decision was made, the executive director wanted to determine whether the candidate was going to basically make trouble for them, or whether they, as a trans person, "knew their place," so to speak. As a young professional, what could I have done in that moment? If I'd said something about why that was problematic, maybe my executive director would have retaliated. Maybe if I'd responded in the wrong way, that trans person, whose work and passion I was fairly familiar with, wouldn't get hired. Here was this person in charge of a well-respected LGBTQ organization, and I was new. Who would believe that such blatant transphobia would come out of their mouth?

"But if you get promoted, my title won't mean much."

The first time I ever heard the word "intersectionality," I was working for an organization in which I was the only full-time person of color. I was also the only person in a full-time role who was a subordinate to everyone. Yet all my co-workers kept using this word "intersectionality," Hmm. So eventually I told my boss that one of two things needed to happen for us to even begin creating an inclusive space for people of color with the organization: 1) Hire at least one person of color who was of equal position to white folks within the organization, or 2) give me a new title so that I, as a person of color, would be of equal standing to others in the organization. There was not an intention within the organization to fund a new position, and it seemed like leadership valued my work, yet this is a direct quotation from my supervisor at the time. As an organization, it was very clear that other people were participating in systemic racism but no analysis of their own practices. I ended up leaving. In the two years that followed, the organization hired three people of color -- and fired all of them within a year.

"We can agree to disagree."

I was giving a talk to a group of folks beside two white, cisgender LGB colleagues. When my colleagues spoke, there were nods, agreements. When I spoke and affirmed that there needed to be more trans people, more people of color, more women, more differently abled folks in leadership positions within LGBTQ organizations in order to change the capacity of these organizations to really wrestle with the problems facing those most negatively impacted by oppression, a white-passing man quickly raised his hand and said, "I disagree!" Wanting to be patient in the moment, I asked, "What exactly do you disagree with?" He said, "Well, we had a lesbian councilperson, and she didn't change anything." Hmm. My response was that ideally you wouldn't have one lesbian councilperson; you would have 10. You would have 200 trans people in office. Three hundred people of color. When I finished my statement, he said, "We can agree to disagree." We actually can't all afford to do that. For those of us who are trans and queer people of color, if our LGBTQ organizations won't hire us, who will? How does that not play into the idea that only white folks, only men and only cisgender folks are capable of leadership? Saying we can agree to disagree, or relegating inclusiveness to an afterthought when your organization is over 10 years old, means you would rather continue ignoring our sleeping out on the streets or going extinct before you would actually relinquish the power needed to make change. Making space for us is about our very survival and not an optional way of being.

Twenty years ago, we could tell the lie that there just were never enough "qualified" candidates who were trans people of color. We could say there was no one visible. Or organizational heads could say they just weren't aware there was a need. Well, in this day, not only have these organizations been spouting off at the mouth about the data, but they refuse to let it change the way they spend their dollars ending anti-LGBTQ discrimination. As trans people of color, we too must be empowered to walk away from these organizations that do not hear our rallying cries and our petitions, that pass us over for promotions again and again. Every day, new organizations are popping up that empower trans-people-of-color communities. Let's do better at supporting organizations like awQward, Trans Women of Color Collective, Trans Tech, Trans*H4CK, Black Trans Media, and Garden of Peace Project, among the countless others. Let's not waste time on the dreams of others and instead seek to fulfill and sustain our own.