We already knew that Amelia Earhart was ahead of her time, what with her passion for aviation and wearing pants (both unheard of for women in the 1930s). But the doomed pilot's prenuptial agreement, posted to Feministing on Monday, presents a version of marriage that is remarkably forward-thinking, even by today's standards.

In the one-page letter written by Earhart to her fiance, book publisher George Putnam, Earhart admits that she is "reluctant" to marry, fearing marriage will "shatter thereby chances in work which means most to me." She then suggests an open relationship of sorts.

"On our life together I want you to understand I shall not hold you to any medieval code of faithfulness to me nor shall I consider myself bound to you similarly," Earhart writes.

In the end, Earhart asks Putnam to make her one promise -- that he will "let her go" in one year if they are not happy. The letter is featured in Purdue University's online Amelia Earhart exhibition.

(Scroll down to see the letter)

Putnam himself also held pretty modern views on marriage. In an essay published in 1932 (one year after he and Earhart married), he wrote that he had few objections to Earhart's career and that he didn't "let" her fly, but rather encouraged it.

"Women who earn their salt are entitled to have what they want to put the salt on!" he writes.

Earhart was the first woman to fly solo across the Atlantic Ocean and mysteriously vanished during an attempted flight around the world in 1937. But she continues to be revered as a feminist icon, and with a prenup like this, it's easy to see why. 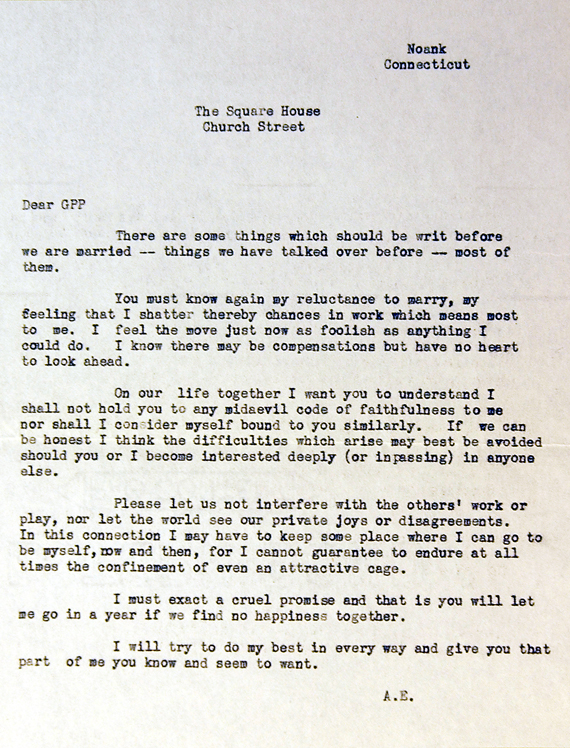 Click through the slideshow below to see photos of Earhart.