A young Tunisian woman has taken FEMEN's topless struggle for women's rights across the Mediterranean.

Nineteen-year-old Amina Tyler posted two photos of herself topless on Facebook in mid-March after having sent them to FEMEN in February. The first image shows Amina with the words "F**k your morals" written across her chest. In a second photo the woman had painted "My body belongs to me, and is not the source of anyone’s honor," in Arabic on her body. Tyler told the Tunisian newspaper Jadal she wanted to "make the voice of Tunisian women heard and protect them from suppression,” according to Bloomberg.

The photos sparked fierce reactions from conservatives in the country. The Agence France Presse reported that Islamist hackers had taken over FEMEN's Tunisian fanpage Wednesday night and had replaced photos of topless women with Quranic verses. "Thanks to God we have hacked this immoral page and the best is yet to come," read one message signed by "Al-Angour," according to AFP. "The page has been hacked and God willing, this debauchery will disappear from Tunisia," another said.

According to the Tunisian website Kapitalis, Adel Almi, an Islamist preacher and head of the Commission for the Promotion of Virtue and Prevention of Vice, even called for Tyler to be punished with 80 or 100 lashes and said she could be stoned to death.

On March 21, a second Tunisian woman posted a topless photo on Facebook and expressed her support for Amina.

Concerns for Tyler's well-being rose last week in the wake of the Islamist threats. Several media outlets reported that the woman had disappeared, with FEMEN leader Inna Shevshenko saying she was unable to reach the Tunisian activist. Le Monde reported on Monday however that according to her lawyer, Tyler is in safety. Famous laywer and feminist Bochra Belhaj Hmida told the AFP that "Amina told me she was doing fine and was going to take up school again soon." She added that "she didn't disappear, wasn't admitted to a hospital," addressing rumors that Tyler's parents had her admitted to a mental hospital.

AFP explains that while Tunisia legally stipulated equality of the sexes in several domains in the 1950s, women still face discrimination in many areas.

Tunisian feminist activists are also worried by the rise to power of the Islamist En-Nahda party in the wake of last year's democratic election. While En-Nahda leaders have tried hard to convince the public that they will not curb personal freedom laws, many women in the country remained worried, Lasaad Ben Ahmed reported for Al Ahraam in August last year.

Under the Tunisian penal code, Tyler can be sentenced to up to six months in prison for distributing her topless photo if someone files a complaint.

FEMEN, a feminist activist group famous for its topless protests, was founded in Ukraine but has increasingly expanded its actions internationally. FEMEN protesters have staged topless demonstrations against Russian President Vladimir Putin, the Vatican and Italy's former Prime Minister Silvio Berlusconi, and in support of the jailed Russian punk band Pussy Riot. 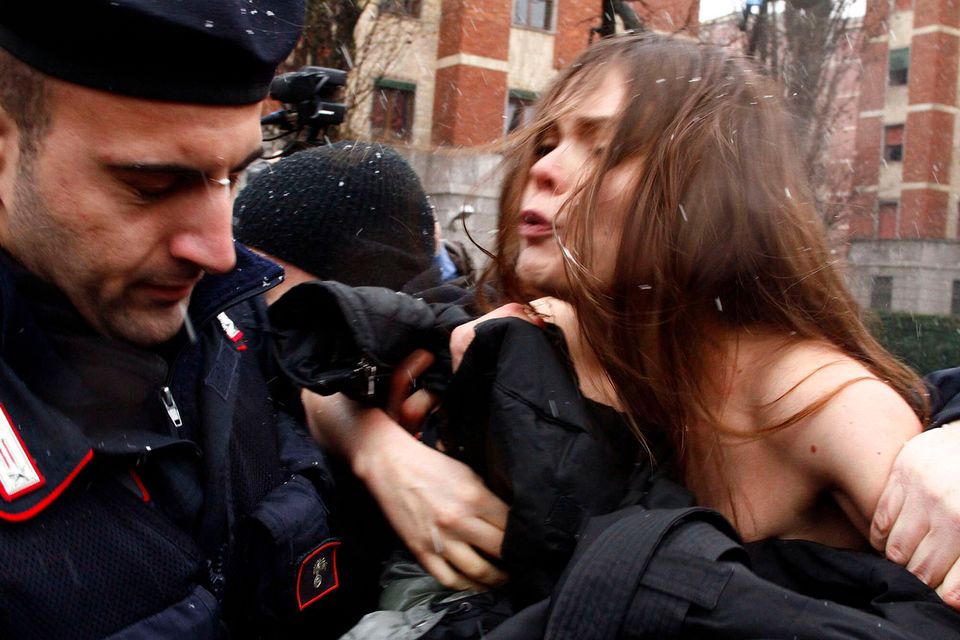