In 1928, four-year-old Gyula Kosice arrived in Buenos Aires with his family, Hungarian immigrants seeking a better life in Argentina. What he never forgot from the ocean voyage was the endless expanse of water, and the stars that sparkled in the night sky. Water and light would later become central elements of his art. A few years later, Kosice read a book about Leonardo da Vinci, and he was fascinated by da Vinci's efforts to combine art and science, and his mechanical inventions. A triad crystallized in Kosice's mind--art, science, and technology--that would serve as the basis for new forms of art. 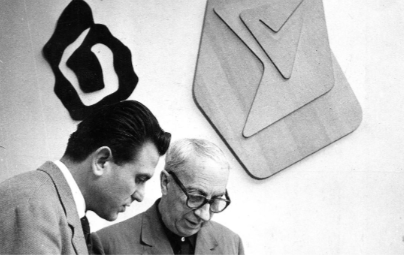 Gyula Kosice (left) with Jean Arp, ca. 1958. All images in this post were provided by Gyula Kosice, and are reproduced with his permission.

On a cool August morning in a residential neighborhood of Buenos Aires, a friend of Kosice's, David Weseley, took me to meet the artist in his studio. Kosice greeted us warmly, and immediately agreed to answer any questions I wanted to ask. He speaks little English, and I speak no Spanish, so we compromised on French, which he learned when he lived in Paris in the 1950s. For nearly an hour, he spoke quietly and precisely about his life and the development of his art. 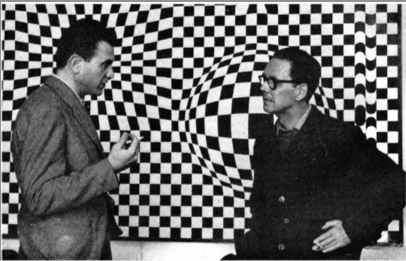 The diversity of Kosice's art is enormous. It is difficult to grasp the contours of his achievement as an artist even while sitting in his studio, surrounded by his art, and listening to his careful narrative. He is one of the modern era's versatile conceptual innovators who, following the pioneering example of Picasso, have refused to be restricted to a single style or genre. His career has spanned nearly seven decades, and is varied in many dimensions. He stresses that his art privileges ideas, declaring that "Theory is the commander; practice is the soldier." 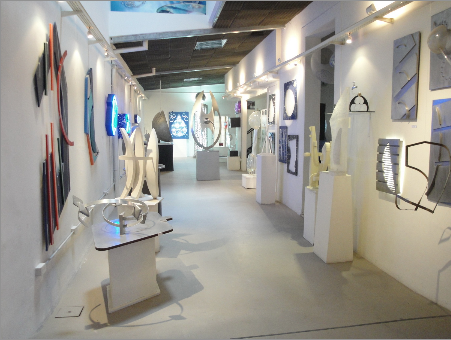 Dressed with casual elegance in a blue jacket and corduroy pants, a wool scarf knotted loosely around his neck, Kosice looks and sounds like a distinguished member of the School of Paris of the 1950s or '60s, which he was for nearly a decade. He has been an innovator throughout his career--"originality" is a word that he uses frequently--but his early works are clearly related to the conceptual movements of advanced art of his youth, including Surrealism, Constructivism, and De Stijl. At the age of 20, he made a small articulated mobile wooden sculpture that became a key contribution to Argentine abstraction, and today is prominently displayed at Buenos Aires' MALBA museum. In 1946, Kosice founded Arte Madi, an Argentine movement that promoted geometric abstraction. Kosice and others in the group made paintings on shaped canvases that today occupy their own room at the Museo Nacional de Bellas Artes in Buenos Aires. This early work gained Kosice a considerable reputation. In a notice for an exhibition he had at a Paris gallery in 1965, the French journal L'Express called Kosice "one of the great sculptors of our time." 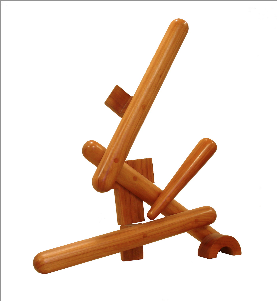 But Kosice never became trapped artistically in any era. This dignified artistic elder statesmen now collaborates with young technicians to make art that uses highly sophisticated new technologies. In his studio, paintings and sculptures that evoke the 1950s and '60s sit cheek-by-jowl with futuristic sculptures in steel and Plexiglas that look like astronomers' models of outer space. In one of these, Planet Kosice, completed just weeks ago, a glowing jeweled sphere appears to be magically suspended at the exact center of a Plexiglas cube that changes colors as a hidden light source slowly shifts from blue to green. Other sculptures, including Kosice's "hydrospatial cities" that he designed as a solution to the Earth's population problem, hang from the ceiling, like miniature inhabited spaced stations. 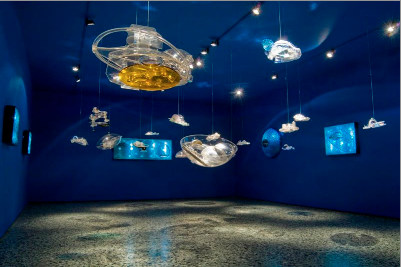 Asked the goal of his art, Kosice answers with a single word: "emouvante"--moving. His work does move the viewer: it makes you think of many other times and places. But the art also actually moves. Walking through his studio, there is motion of all kinds. Some of this is literal--water flows, mirrors rotate, air currents make suspended spheres bounce. And some of the movement is visual, as brightly colored geometric patterns create optical effects and illusions. Kosice refers often to change: he makes his art for the future, to poeticize the world, to make people's lives more interesting and more beautiful. 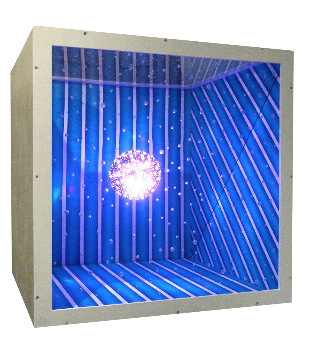 Kosice is a central figure in advanced Argentine art of the twentieth century: another major figure in that art, the conceptual artist Nicolas Garcia Uriburu, owns several works by Kosice, and describes him as "a fundamental artist of his time." Kosice has had major exhibitions at Argentina's most important museums, including a retrospective at the Museo Nacional de Bellas Artes. Yet today, at 87, Kosice continues to think of the future. His current goal is to present his work at the Centre Pompidou in Paris. Why? "I want to return to Paris to see old friends, and to get new criticisms of my work." 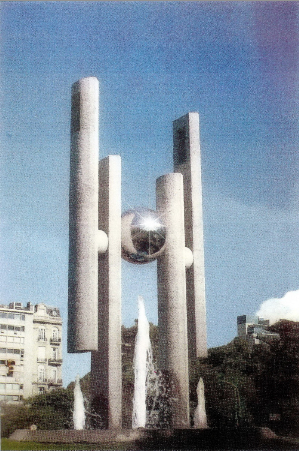 Kosice's studio functions as a private museum. Located not far from the center of Buenos Aires, in the Almagro district, it is open to visitors on Fridays. Visitors are asked to schedule appointments in advance, but there is no charge. (I was given a tour by the artist's grandson, Max Perez Fallik, who teaches sociology at the University of Buenos Aires and speaks fluent English. What does he get from the tours? "The pleasure of seeing visitors' reactions to the art.") If you travel to Buenos Aires, I strongly recommend a visit to Kosice's museum. It is a beautiful and fascinating record of a conceptual artist's imaginative and innovative voyage through the art world of the past seven decades, that continues today.