Personalized cancer treatment is the future. Every person is different and each experience with cancer is unique. It's been almost 20 months since I received my second breast cancer diagnosis. Wanting to be there for my sons and husband is what helped me through it all. Just looking at my family fills my heart with love and pride.

It's hard to be bold and brave sometimes but we need strong role models. Alicia Staley from Cure Forward recently reached out and asked me to write this open letter to you - a woman diagnosed with breast cancer. Alicia believes we need more people to share their stories, like Angelina Jolie, to encourage and inspire others. I wrote about Angelina's story earlier this year because I admire her courage to be so open with her situation.

Writing this was harder than I expected and this letter glosses over my history. My situation is complicated and I find it humorous in an odd way.

I'm sorry if you or a loved one received the cancer news. Since I don't know your circumstances, my advice for you is simple with three recommendations.

(1) Make sure to at least get a second opinion. There are many options out there, particularly now that research is being done with immunotherapy and other personalized treatments.
(2) Seek advice from others who've been through something familiar as this helps reduce anxiety. Having that support helps provide strength and hope. You're not alone.
(3) Continue to live life by looking forward and be true to yourself. Don't give up.

Having a breast cancer diagnosis is tough to hear. And I've heard it twice. It was detected early both times because I am in tune with my body. In between the two cancer treatments, a primary benign brain tumor and a tiny pituitary tumor was found. The slow-growing brain tumor is referred to as a vestibular schwannoma (sometimes acoustic neuroma) and is pushing on my brain stem.

My first cancer diagnosis was in 2006 -- DCIS and aggressive -- it was detected in a mammogram right before my 40th birthday. The doctor called me on my cell after business hours. I cried. A lot.

Part of the solution was to meet with a geneticist and a plastic surgeon to discuss reconstruction if a mastectomy was chosen. I just wasn't comfortable with a mastectomy at the time. I wanted the least invasive route and chose a lumpectomy but had to have another because the first surgery did not have clear margins. After the second lumpectomy, the breast cancer doctor convinced me to have radiation. That kicked my ass. Low-grade radiation every day for 7-1/2 weeks.

The geneticist told me in 2006 that my BRCA results would only be 15 percent accurate because of my Asian heritage...my maternal grandmother is Vietnamese (don't know what the correlation is -- can someone shed some light on this?). I did have the genetic test eight years later in 2014 after the second diagnosis. It came back negative so we didn't gain any additional insight from that experience.

The brain tumors were discovered after I kept pushing to find out why I had these weird body aches and pains, sinus problems, etc. The response from the internist I was referred to was to simply give me prescriptions for the pain. The prescriptions were not filled because I intuitively knew that would just be masking the underlying cause.

Then my period didn't happen for about 2 months and my breasts hurt a lot. This was 2008. Bloodwork showed that I was not pregnant but it was discovered I had high prolactin levels. What the heck is prolactin? This is the hormone that makes breast milk. I was prescribed bromocriptine to help reduce the prolactin to a normal level. This had to be taken daily and I felt too good on it.

At my check-up with the breast cancer doctor in early 2009, I told him about the high prolactin levels. He thought it would be best that I have an MRI of my head to check out the pituitary just in case. That is when the brain tumors were found. It seemed my social life would revolve around meeting with specialists for the near future.

First we had to tackle the pituitary issue because that was causing problems. I sought out the most respected endocrinologist in Atlanta who is also an Emory professor. The prolactin levels were finally under control through a stronger (and more expensive) drug called cabergoline, a dopamine agonist. I took the cabergoline twice a week at first and was eventually tapered down to once a week.

Then we had to determine what to do about the acoustic neuroma. My body adjusted to it because it grows very slow and is why I didn't notice any symptoms. I met with at least three different neurologists and three neurosurgeons, one at Northwestern Memorial Hospital in Chicago that specialized in this type of brain tumor. He gave me the most hope and I decided on non-invasive radiotherapy. The details of that is a different story.

At one point the endocrinologist took me off the cabergoline since everything was "normal" for 3 years. After a few months though, my prolactin levels shot up again, along with body aches, and I had to get back on the drug. And less than a year later, I had invasive ductal cancer in 2014. Same side as the DCIS. Dammit. This was caught early and considered Stage 1.

I did a lot of research and soul-searching, and decided that I needed to be more aggressive this time. A double-mastectomy and reconstruction surgery were done at the same time on my 49th birthday. I viewed this as a new beginning. Some women wait to do reconstruction surgery but that wasn't the best path for me.

Based on additional DNA testing of the tumor - the oncotype - it was found to be aggressive with a high chance of metastasizing, even though I had clean lymph lodes. So my options after surgery were to (1) take Tamoxifen by itself, (2) do chemo by itself, (3) do chemo and then Tamoxifen, or (4) nothing but surgery. Having chemo scared the living daylights out of me. What affect would it have on my brain tumors? No one could answer that question. I was a zebra among horses.

I decided on the chemo alone after surgery and complimented it with natural treatment to boost my immune system. Ate as clean as possible, took pre and probiotics, drank nothing but water, and had massages two days after each chemo to help eliminate those toxins faster. I still follow the clean eating regimen and continue to exercise daily, including some yoga.

Chemo pushed me into menopause and taking Tamoxifen would reduce my chances by only 1-3% of cancer returning after chemo. I tried Tamoxifen for 2 months in 2006 and it was awful! Plus one of the side effects of Tamoxifen was uterine cancer. After weighing the benefits and risks, no thank you.

It appears the pituitary tumor is 'dead' in the last MRI from December 2014. The chemo might have helped in that regard. I have been off cabergoline again for about 9 months and prolactin levels are in the normal range. No abnormal body aches either. I focus a lot on keeping my hormones balanced through diet and organic personal care products.

There are no known causes of acoustic neuromas. One of the neurologists believes I was exposed to something toxic as a child, such as radiation, and thinks this could be the root cause of the brain tumor. This will have to be monitored for the rest of my life. With the annual MRI is coming up, I am hopeful nothing extraordinary is found, that the pituitary is normal, and the acoustic neuroma is the same size or smaller.

My last chemo treatment was 14 months ago. I have a full head of hair again!... but not sure what to do with this super-curly hair though. I am in maintenance mode, feel great overall, and definitely thankful for each day. Despite everything that I've been through the past 9 years, I remain positive and enjoy life. There are moments of anxiety and self-doubt but that is normal for most people in any situation. It's going to be okay. You have to believe that.

We've all heard the phrase "we aren't promised tomorrow." I remind myself of that on a regular basis. And I'm thankful to be 50 now!

The most common regret in life is not living a life true to yourself. Have the courage to do so. You can start small, but start honoring at least some of your dreams. I've always wanted to write a book and published my first title this year. It's called RealThings: 6 Ways to Embrace Life and this was part of my healing process. I encourage you to explore and discover the right healing path for you. 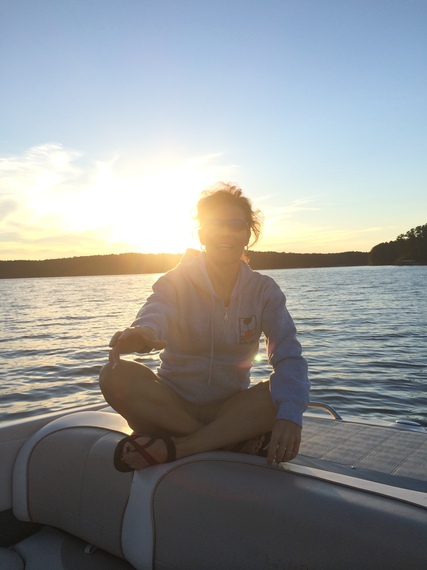 About the author: Brigitte is a Media Solutions Consultant, Health Advocate, and author. Check out her personal site at Brigitte Cutshall.