It was not the election of Donald Trump that prompted Andy Shallal to come up with the idea of an inauguration eve "Peace Ball." The activist, sometime political candidate, and founder of Washington DC's popular Busboys and Poets group of restaurants/bookstores/performance spaces was concerned with the harsh rhetoric of the campaign so he began to think about some kind of gathering in late summer of 2016. Then, when he visited the Smithsonian's new Museum of African-American History and Culture in September, he decided that he wanted to host the event there. Before he even left the museum, he called scholar and activist Angela Davis, to invite her to help put it together.

Shallal saw it as "a gathering of progressives, artists, activists coming together to celebrate. Too often I think we tend to forget about celebrating some of the successes. There have been a lot of changes taking place in the past few decades and we have to stop every now and then, pat ourselves on the back, get energized and go out there and do more."

He wanted to include artists because:

They see the world from a humanistic perspective as opposed to greed. They look for beauty. They look for moments of creative opportunities to move things forward. They don't always agree on process, on how to get there, but they all want to get to the right place of making sure that we have a better world, of social justice and humanity. Politicians are not leaders. Politicians are basically followers. We know artists and cultural leaders are the ones that actually create the change. Artists are able to reach deep into a person's soul and reach their humanity and find commonality. What politicians look for is divisiveness sometimes, because you know they divide and conquer, but artists actually look for commonality; they look for things that make us unite as humans.

In order to convey the "fun and joy and just being active that is what keeps me hopeful," Shallal put together an all-star lineup of "voices of hope and resistance" to appear at the black tie event. He told "those who are overwhelmed" to visit the exhibits and artifacts around them, telling stories from abduction and slavery to Jim Crow, Civil Rights, to Black Lives Matter and the first black President and First Lady: "Look around at this monument to hope, resistance, and resilience." 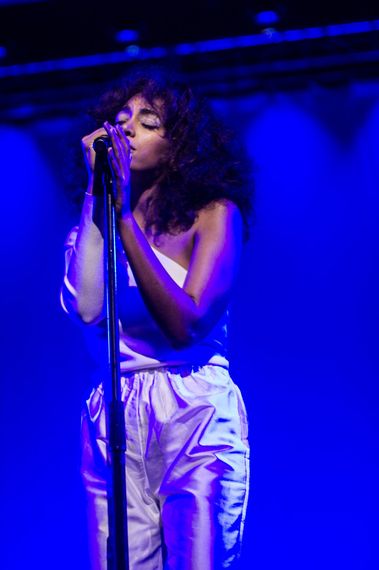 Performance artist Sonya Renee Taylor called on the capacity crowd to make "a connection of art and power and deliciousness." Poet Alice Walker called in by phone to suggest "principles for getting through the Trump years," telling us to "turn up the kindness volume for people you know and people you don't know," keep "the closest possible connection to nature," "maintain respect for our closest biological and spiritual ancestors," and stay physically active.

New Jersey Senator Cory Booker talked about the American tradition of challenging our leaders and work toward justice. Journalist Amy Goodman, told the story of being arrested for her coverage of the Dakota Access pipeline protests and urged the group to insist on "fact-based journalism" from independent sources that "cover power, not cover to get power, the fourth estate, not 'for the state.'" Writer Naomi Klein promised to try to follow Shallal's direction to be "upbeat and optimistic," explaining that "pessimism has to be saved for better times." She called the election a "corporate coup d'état" where "conflicts of interest are the whole point."

The presentations concluded with rousing musical performances by Esperanza Spaulding and Solange.

He included in the evening's program a poem from the man who inspired the name of the restaurants, Langston Hughes, perhaps a response to the slogan trademarked by Donald Trump:

We the people must redeem
The land, the mines, the plants, the rivers.
The mountains and the endless plain --
All, all the stretch of these great green states --
And make America again!