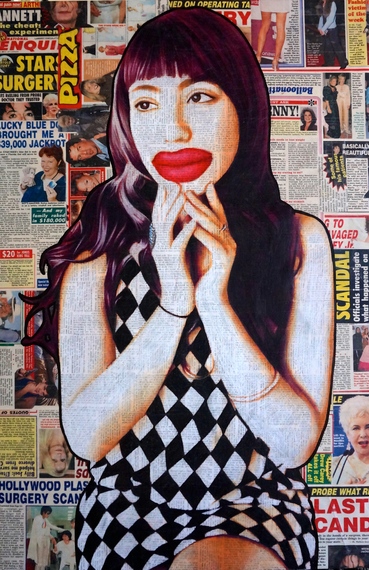 Kill Your Selfie by Annie Terrazzo is more than just solid, if caustic, advice for mental health and self-respect -- it's also the name of her new pop-up art show, opening Friday, January 16 at Red Pipe in Chinatown.

The selfie -- it's a real thing and also a semiotic construct, a tenuous art form and a psychological cry for help. It's a phenomenon, a meta-meme, a mockery and a democratized form of the classic "self-portrait" familiar from art and literature. It's even in the dictionary now, the real one, not the urban one (along with "hashtag, truthiness and w00t -- but we digress.) The point is, the selfie is something that students of social psychology, human behavior, visual language and smartphone culture all must take rather more seriously than they might otherwise be predisposed to do -- and the same goes for artists. 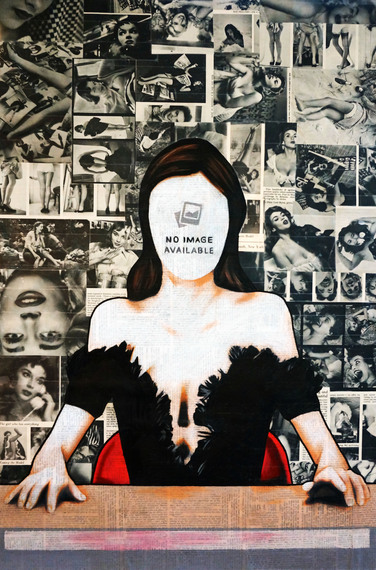 Wielding such satisfyingly analog elements as newspaper, scissors, paint brushes and large-scale compositions, Terrazzo's newest series of portraits use dark humor and deliberate hyper-sexualization to explore and express how insidiously self-immolating and unhealthy this phenomenon has become. Lamenting a time when "having a camera was about taking photos of the things you see. It was a lens pointed outward, capturing your perspective," Terrazzo instead has committed to expressing her sense of herself, the early, difficult memories of events that shaped her personality and her fraught view of her current place in the world through the old-school art-historical mechanisms of mixed media collage and narrative portraiture. 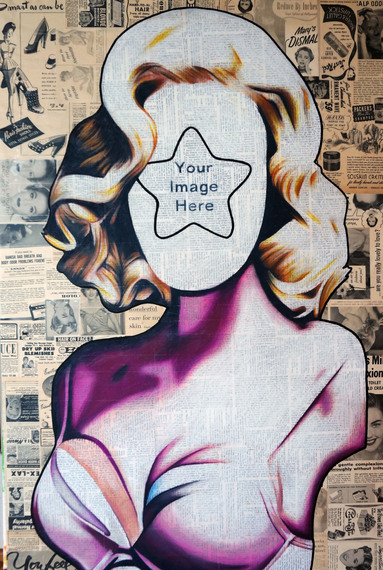 The results are a lady-rogue's gallery of misunderstood hotties, masquerade and mannequin lifestyles, occupying dizzying, dynamic pictorial settings of the headlines and ad graphics that form the backdrop of life's kaleidoscope of information overload. They are a little too beautiful, and a little too stylized, to be considered realism -- but the surrealism they flirt with is the everyday kind in which we are all immersed. Ultimately much less simple than that admittedly hilarious premise hints, the works in Kill Your Selfie might just inspire you to flip that lens back around -- away from mirror, mirror and toward the world outside. 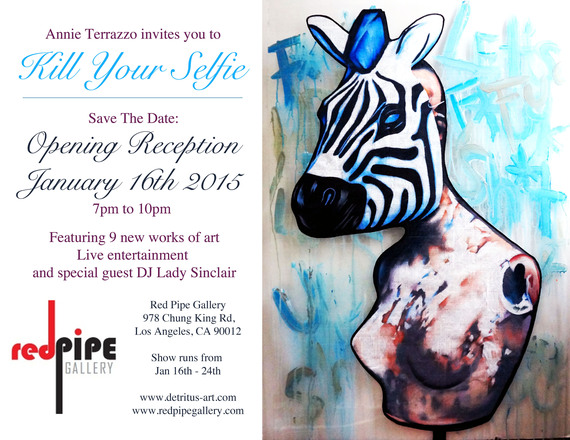 The exhibition opens at Red Pipe Gallery in Chinatown on January 16, 2015, 7-10pm, with music by DJ Lady Sinclair.