We are on a bus, which is carrying us to a port, where we will load up a ship. Nothing unusual about that.

Nothing strange, except for our fat wool hats, our puffy penguin-y parkas, our knee-high insulated boots. Nothing weird but where we are: Punta Arenas at the southernmost tip of Chile. And where we are going: to the isolated, ice-walled bottom of the world. 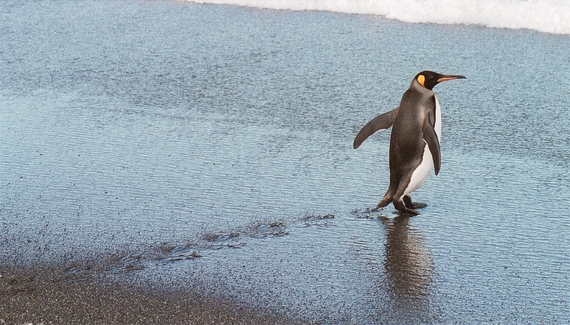 We know that cruises are supposed to be warm. But do we care? We thumb our facemasked noses at the idea of palm trees. We are explorers who are booked on Lindblad's steel-prowed, spray-glazed Endeavour.

Stadium-sized icebergs, the Falklands, South Georgia Island, and the continent of Antarctica itself are our goals.

Antarctica. No one lives there except for a handful of scientists. It's the world's driest desert and its ultimate cold spot, thanks to winds as sharp as 199 miles an hour and temperatures reaching as low as -128 Fahrenheit.

Lindblad Expeditions was the first outfitter and cruise line to bring tourists here on a regular basis--they've only done it since 1966--and the 110-passenger Lindblad/National Geographic Endeavour is engineered for ice. There's a 40-foot-high crow's nest up at the bow to keep an eye out for dangerous floating chunks of the stuff, and the chairs in the dining room are wave proof: they are chained to the floor. 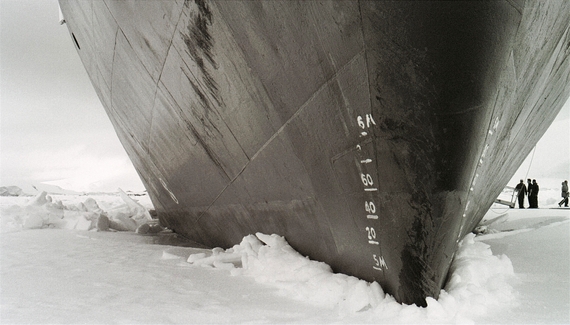 As we sail through the Strait of Magellan and begin to dip and roll, one early surprise is the other passengers. Some seem almost famous. Bill Cole, a performer from Pasadena, Calif., informs me that his was the voice of the original theme song for TV's "Gilligan's Island." But when I ask if he ever met the Skipper, Ginger or Mary Ann, he says no, so I stay slightly skeptical.

For other passengers, extreme adventures are like day-trips to a local beach. "I'm a repeat customer," says Rose Letwin of Redmond, Wash. "I've been to Antarctica, let's see, two times so far."

Audrey and Gerry Olson from Tonto Verde, Ariz., are first timers on this trip but they've already bagged the North Pole. "We went on a Russian icebreaker," says Gerry, "though not all of the ships make it. They had a barbecue for us right on the Pole. Grilled sausages, I think it was, and champagne."

Arrival at the Falkland Islands, which seem as green and treeless as Scotland, brings warnings. Who knew that the islands were still sprinkled with land mines left over from the 1982 turf war between Britain and Argentina? 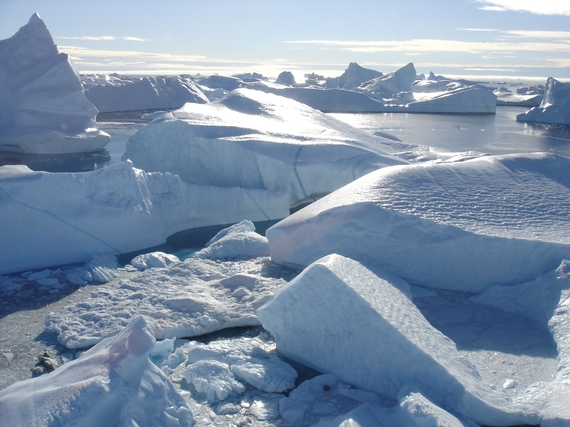 Along with others, I have a very long look at the "Minefield Clearance Situation Map" posted on the Veranda Deck and step gingerly when, in the intrepid Lindblad way, we are ferried in a fleet of zodiac boats ashore. Later we climb a hill to view the wreckage of an Argentinian helicopter peppered with bullet holes and shot down early in the conflict.

Next stop: South Georgia Island, which though free of landmines, is a powderkeg of breeding, molting and arguing animals and birds. "Remember," we are told in a printed notice, "Do not approach penguins, albatrosses, seals or any other wildlife so closely that they move away from you, act agitated or change their behavior."

No worries here. It's the wildlife that approaches us. For starters, landing on a beach in South Georgia means running a gauntlet of 600-pound fur seals and elephant seals that top out at twice the tonnage of a typical SUV. 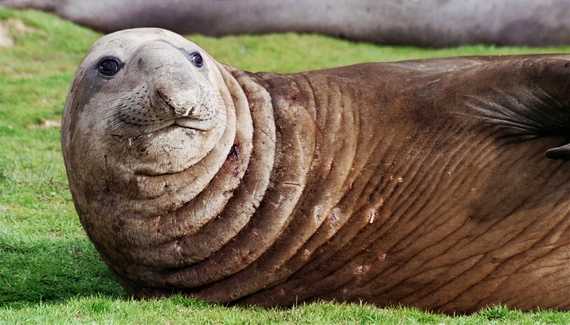 Though both species smell like fish sticks and produce resonant belches, it's the fur seals that are the problem They show us mouthfuls of wolf-sharp choppers. And, we are told, they bite. Since we've interrupted their spring-break beach party they are annoyed. Luckily, the guides from the ship know expert tricks with tripods and clapping hands to keep them at bay.

As for elephant seals, no sweat. Think vacuum-cleaner bags with snouts--used ones that are full to the brim. We step around them to the marquee attraction: hundreds of thousands of walking, whistling, swimming, nipping and kazoo-playing king penguins.

Earlier in the trip, we'd sighted a few of these fat guys floating past on top of ice chunks. But this is penguin central. It is not a colony. It is a noisy city.

There are penguins surrounding you. Penguins eyeing you. And penguins passing by like pedestrians on Fifth Avenue.

Some stop short for pictures, some have urgent business, and here and there are penguin chicks that instead of the grown-up black and orange and white are bundled up in fluffy down.

Susan Hickey of Juneau, Alaska, tells me she feels inspired by this color-coordinated penguin population. "I'm thinking of remodeling my kitchen," she says, "and I like the idea of all these contrasting shades." 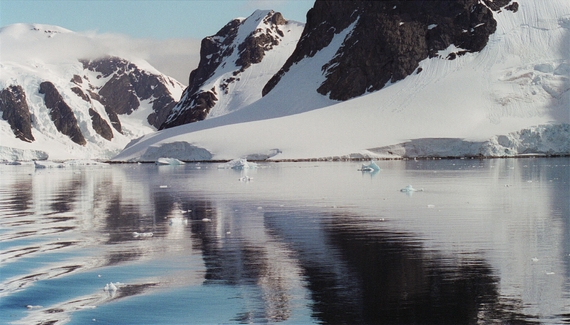 The weather's been eerily warm so far but temperatures sink down into the 20s and it begins to sleet as we circle the South Georgia grave of famous polar explorer Sir Earnest Shackleton and drink a toast to him with paper cups of Irish whiskey.

It is time for our own Shackleton adventure. The plan is this: for those who are up for a steep 1000-foot climb and hike over loose rocks and snow, we passengers will try to retrace the last segment of the explorer's route back to civilization after his catastrophic shipwreck.

With the ship's doctor along just in case, a band of us staggers up into the hills over South Georgia's Fortuna Bay. Most have protective polypropylene or Gore Tex gear on top and below. I rely on a couple of cotton shirts, a pair of flannel-lined khakis, and my L.L. Bean duck boots that have a tendency to take on freezing seawater whenever we go ashore. 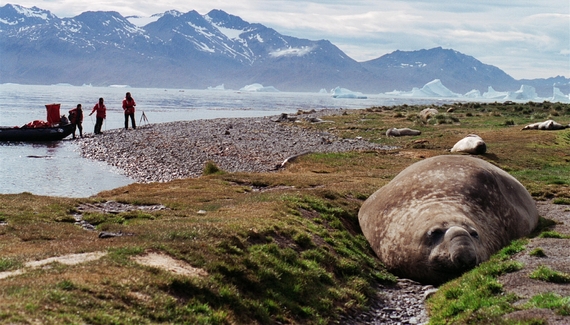 This equipment works fine until we get to a glacier that drops down towards our destination--an abandoned whaling station where the ship has sailed around to meet us.

The way to deal with the glacier, we decide, is to sit down on the snow, lean back and slide. Falling objects clutching day-packs, tripods and cameras! Look out below.

We are rocketing downward and I am shouting with joy until my khakis begin scooping up slush and I start spinning sideways while I slide. I am feeling wet instead of icy. Why is this?

It is because I've fallen through the snow and into a moss-slick, numbingly cold mountain stream.

Once everyone finishes laughing, I am fished out and force-marched to the ship to dry off. Lindblad is a line that takes pains to make sure its passengers stay sensibly warm and safe and I get a well-deserved lecture on actually using the cold-weather gear I've been issued and have packed for the trip.

Back at sea again, we're on our final leg to Antarctica and we are busy toasting some more. This time it isn't Shackleton we drink to, but our hike, and there are shots of aquavit, plates of pickled herring and glasses of beer. Then the storm hits.

Wind, waves, nausea, aftertastes of herring, bitter regrets about the aquavit and beer. I try to chill out in the library but things seem permanently tilted. The horizon sticks up threateningly like a spear and I head out on deck to find an eerie light in the sky that's leaking from somewhere and swirling spray whipped up by Godzilla winds.

Finally, by late in the evening, things get quiet. Everyone is out by the rail watching the sea lie down and snapping pictures of pure, prismatic oranges and purples that have spread over the ship like a wild umbrella. 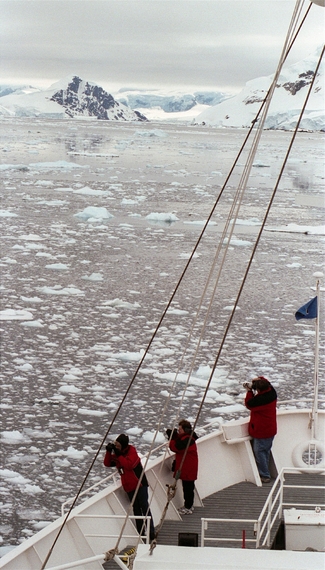 It is the middle of December. According to the ship's program, the sun will set at exactly 11:57 pm, and after a few hours of afterglow, will pop up again at 3:22 am. No one even tries to sleep.

We have made it.

The White Continent is ours to claim. Our official welcome? It is the sound of crunching. The sea is solidly frozen and though the ship reverses its engines, punches and pushes, we can go no further.

Later we will load the zodiacs and actually make landfall on the continent at a slippery, wind-scoured beach called Brown Bluff (part of the Tabarin Peninsula). We will visit snowy Antarctic islands, and a few of us will even slip underwater for a wink-quick, breath-swiping "swim."

But somehow it is this second when we are shoving up against sea ice that makes the abstract idea of the Pole entirely real.

The world is definitely round. Now I know this.

Cold and oval as a snowball--one that spins so crazily that the sun stays up most of the night and the ocean reaches its end.

If I can get my hands around it, this I promise:

I will come back again.