You may have read about it first at TalkAboutEquality.com two nights ago, or perhaps you saw the story yesterday on Towleroad or JoeMyGod. Maybe you caught it on Fark.com or today on The Huffington Post.

It seems that a parent was using Craigslist to sell their kid's Macbook. In itself, it doesn't seem like a big deal. But in this instance, the parent was getting him a new Macbook because after getting caught in "homosexual acts," he was "choosing to be straight." The new Macbook was to be his reward.

While this sounds ridiculous at first glance, this kind of behavior from parents around the world is not unheard of. But as it turns out, this particular story is a fake.

I've now done a great deal of research, and this story has now been posted on dozens of other sites so, here's the story...

The response I received was from a Clarence M., and despite my efforts, there was never another reply from that address, so I googled the full name in Culver City and came up short. Then I just searched his name to see what I could find. Other than the random "find someone's phone number for $19.99″ ads, one post jumped out at me. 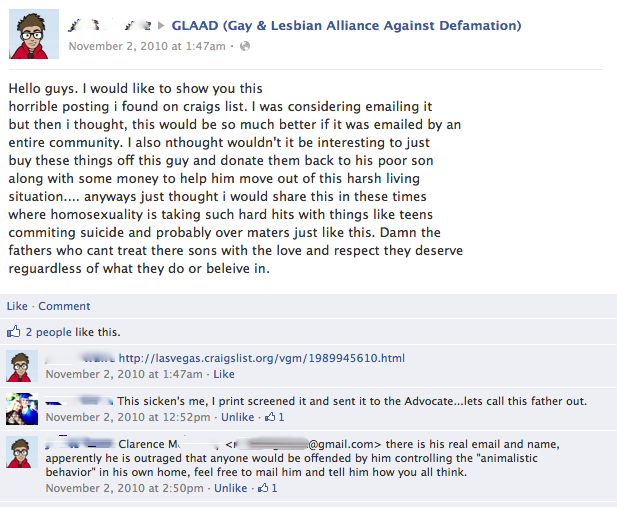 The name was the same, and the circumstances nearly identical. And lo and behold, one of the commenters to the GLAAD post has provided me with a screencap of the Las Vegas ad (click to enlarge):

Having this new email address, I started another search, which wasn't too hard. It seems that for some inconceivable reason, Alex A. of Las Vegas, Nev., has been posting fake ads to Craigslist where he poses as the parent of a gay teenager, tells a story about catching his kid having gay sex, and either decides to sell his kid's things or reward him for "choosing to be straight."

Judging from Alex's Google+ and Twitter accounts, he's a handsome young man. So I'm not sure why he sees the need to spend so much time trolling Craigslist with obnoxious, fake stories. I'm trying to figure out how one man's life could be so boring that he feels the need to obsess over gay teenagers having sex?

Finally, I received a response after calling the poster out via email. It seems a young man named Daryl has been up to no good. Following are excerpts from some of our emails back and forth:

Yes, I need to keep my aliases straight. It's Daryl actually. I write horrible posts on Craigslist all over the country to see what issues make people angriest for a project I'm putting together. I'm sorry anyone that was offended. ...

It started out when I got my first computer, my friends and I put an ad on Craigslist saying we were selling Justin Bieber tickets. We made fun of the people that would write us. That gave me an idea to start putting up other things on Craigslist to see what people have passion about and to get reactions out of them. I want to write something about issues that people are most passionate about. I want to be a writer one day. I'm sorry about this all. I just don't want this to affect me going to a good school one day. I'm sorry.

I've now confirmed Daryl is who he says he is, and I think he's been significantly frightened away from pulling this kind of thing again. And, finally, he asked me to tell you all this:

I guess I just never understood how bad it was for most people. I have no problem with gay people at all. It seems so foreign that someone would hate gays. I'm sorry. I never understood. One of my friends I think is gay. We have been friends since we were little kids. If anyone said something to him I would be pissed. I didn't understand how bad some people were treated. I'll never do anything like this again. I'm having panic attacks like crazy right now. I would never be against gays, ever. I'm sorry.