In the Kennedy era, the concept of "wearable technology" that would capture your every motion and wink of sleep was the stuff of science fiction. But for conceptual artist On Kawara (1933-2014), logging everyday minutiae became his life's work and legacy. 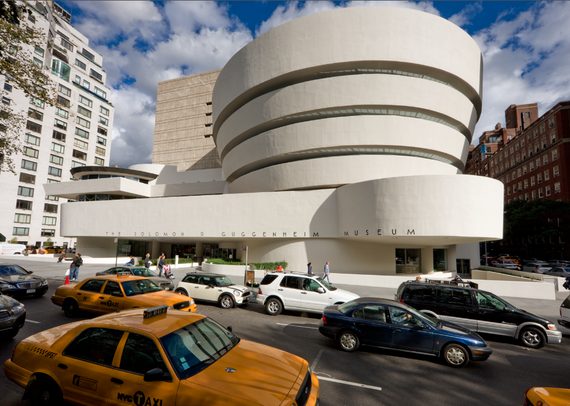 The current exhibition at the Solomon R. Guggenheim Museum in New York City, On Kawara--Silence, is a retrospective of the Japanese-born artist's works, with 12 series exemplifying both the trivialities of daily life and the power in its sheer quantity. Across collections such as I Got Up, Today and I Am Still Live, we are told--quite literally--what time Kawara woke up, what the headlines of the day were, and if he were still alive. Like the data collected from a Fitbit or FuelBand, in individual bites it seems worthless. But taken as a larger whole, an important vista emerges of a lifestyle, an era and even personal and cultural values. 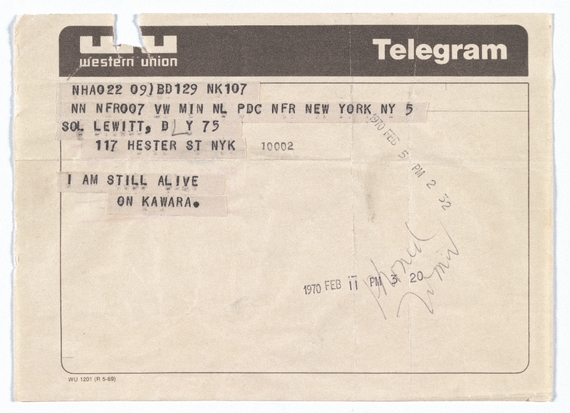 Senior curator Jeffrey Weiss and assistant curator Anne Wheeler worked closely with Kawara on this retrospective of 50 years of work. Thousands of pieces were gathered and will be on display through May 3, 2015 at the Guggenheim, a place that the artist wanted for the show, feeling it fit his oeuvre. The upward spiral of Frank Lloyd Wright's iconic space mimicked for Kawara the eternal passage of time, a meditation of his many series. As I took steps upward, I'd dogmatically tap the band on my wrist, noting my own passage of time and movement.

Image of the author's FitBit dashboard.

The cornerstone series in the exhibition is a 90-day sample of the Date Paintings (the Today series), which comprise nearly 25,000 monochrome canvas paintings in very dark gray, blue or red with the month, day and year simply painted in white acrylic. The look is mass-produced, but Kawara created each by hand. Every canvas date is paired with is a newspaper clipping from that day, placed in a hand-made cardboard box. As viewers ascend the Guggenheim's ramp, we track the struggles of a nation with civil rights and equality, updates on Apollo mission, and an eerily-relevant ad about the benefits of vaccines after a 1972 measles outbreak. But this isn't a history lesson or a statement on the evolution (devolution?) of global relations. Kawara created these paintings from 1966 to 2013 in an unceasing ritual that itself was, perhaps, the most artistic act of all. 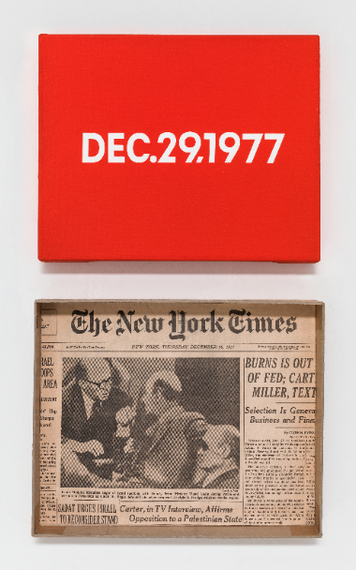 The series I Got Up is comprised of more than 1,500 postcards that Kawara faithfully sent to friends and acquaintances including artists, collectors, critics, and curators from his global travels and his home in New York City. Each postcard is stamped with the phrase "I GOT UP AT," followed by the precise time he arose. As with Today, we see a cultural evolution and the passing of time. The 1960s New York City postcards differ from those a decade later, when the contours of lower Manhattan have changed to include Battery Park and two new buildings rise up at One World Trade. And Kawara still gets up. 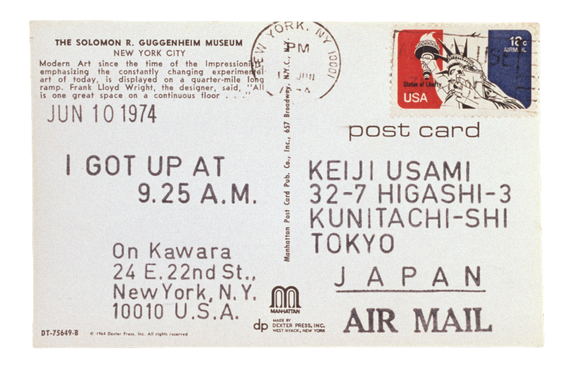 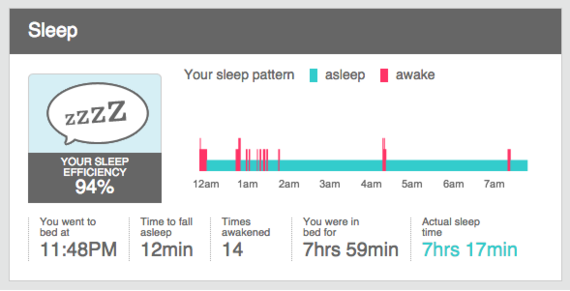 Image of the author's FitBit dashboard.

The exhibition also includes city maps upon which the artist traced his route in a single day. This, too, foreshadowed what we Jawbone and Fitbit wearers do. We log on to our computers and smartphones to trace our own exact routes jogged or walked. We look at data today as simply that, personal data (or something that people could use to hack our identities or companies to relentlessly market to us). But over half a century ago, On Kawara was engaged in the analog version of this, the repetition and dedication to the quotidian as art. One so broad and so evocative as to take over the Guggenheim.

Yet with all of this, our digital reams of data and Kawara's work are essentially impersonal. You took 9,563 steps today. But where did you go? How did it make you feel? Did you walk to an old lover's apartment or just to Starbucks? Kawara got up at 7:18 AM. Did the morning's headline of the Vietnam war break his heart? Did he even read it? All that's left are the log books, the confirmation of a life lived. The quality is up to our own artistic interpretation, and how we fill the time in between our own smartphone logs and digital syncs is truly a life's work.