As the death toll from Ebola continues to rise, especially in the hard-hit West African countries of Liberia, Sierra Leone and Guinea, the need for a viable treatment or cure is growing increasingly urgent.

Fears that the pandemic might escalate have prompted the World Health Organization (WHO) to announce a crash project to come up with an Ebola vaccine. At least seven different vaccines are in development. One major worry is that any vaccine, if approved, may not be widely available for several months--June at the earliest.

But there is another growing concern among health officials: As often happens in times of medical crises, fringe groups are mounting a fear campaign against modern medicine--in this case the development of Ebola vaccines.

The disinformation effort is being spearheaded by the most high profile organic lobbying organization in the United States. The Organic Consumers Association, which has long questioned the benefits of vaccinations and advanced biotechnology in defiance of mainstream science organizations, has emerged as the point group in a loose coalition of organic supporters, alternative health advocates, natural product and supplement entrepreneurs and their customers and other scientifically questionable groups challenging mainstream medical and scientific research efforts to find a preventable vaccination against the disease.

According to the Organic Consumers Association website, modern medicine should be replaced by the use of supplements and vitamins to treat Ebola. The OCA claims there are alternative natural treatments that individuals and health workers could currently be taking to prevent and treat the spread of Ebola. OCA cites as its main evidence one study that shows that the Ebola virus relies on selenium--which it quickly depletes from the host's body, further weakening the immune system. Replenishing selenium is vital to patients' survival once infected. However, there is no empirical evidence that selenium supplements would have any positive effect on patient recovery or survival and could even be dangerous.

Advocacy groups also make another claim that credible medical authorities do not endorse--administering supplements of vitamins C in patients and those at risk could help reduce the impact of the virus and other diseases. "Vitamin C is both very potent and optimally bioavailable in accessing any viral infection," writes "Natural Health 365," an enormously popular site that, almost comically, has as its slogan, Scientific Solutions, Proven Results."

So why hasn't more stress been placed on these measures, which could effectively treat Ebola and potentially save lives? According to the OCA, this might be the result of the government putting greater stock in the profitability of drug companies than actually treating the virus. In other words, the organic group claims the government is in a conspiracy with Big Pharma to deny people inexpensive life-saving remedies.

"The status quo in which government creates and protects drug company monopolies was always outrageous. Now with the threat of major and deadly pandemic in sight, it is completely unacceptable. It is essential that voters become aware of what is going on behind closed doors in Washington so they can speak up and move the political system-before millions of lives are needlessly lost and our economy also dealt a savage blow."

That's the standard conspiracy line echoed by other modern medicine skeptics. "Anyone receiving a rushed mass vaccine like this is putting an enormous amount of trust in Big Pharma and the government, both of whom don't have a history of trustworthy behavior," warns The Organic Pepper, a well-known Canadian site. Many of these organic and alternative health groups and businesses stand to profit handsomely if masses of people reject modern medicine to turn to 'natural' treatments vitamins, supplements or natural products or organic products in response to diseases like Ebola.

They are also trying to capitalize on this crisis to resurrect long discredited attacks on vaccinations in general. According to the Natural Health 365 site, "No serious attempt has yet been made to detoxify vaccines, and no serious efforts have been made to allay the very real panoply of substantial side effects that so many vaccines can inflict"--another long since discredited fear claim about vaccinations, which are safe when used according to standard medical guidance.

As surgical oncologist David Gorski writes on the Science-Based Medicine blog, anti-vaccine activists are already warning against an Ebola vaccine, even though one hasn't been approved yet and is unlikely to be for quite some time. 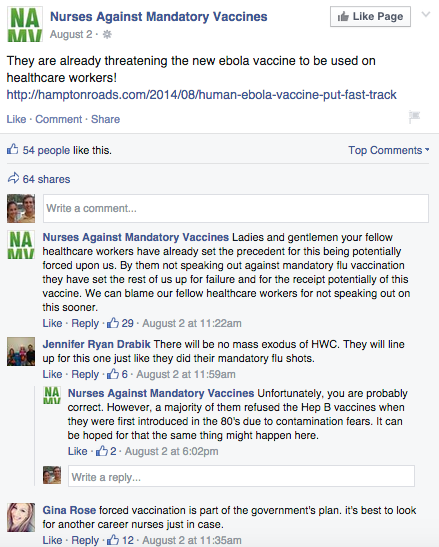 The organic-natural health alliance campaign echoes the lobbying going on in Africa, where faith healing is being promoted, That includes laying on hands, Gorski reports, which is a great way to infect oneself with the virus if those hands happen to come into contact with any bodily fluids of the sick and then happen to touch a mucus membrane.

Here in the "developed" world, we have similar claims being made, for instance, in this article entitled Can Gingko and Turmeric Help Stop Ebola? I could have saved them the trouble and said "almost certainly not," but the author of this article insists on all sorts of handwaving about JAK-STAT signaling p38 MAP kinase and the effect of Gingko and Tumeric on these pathways. It might be worth a detailed deconstruction elsewhere. For now, let's just say it's "speculative," to put it kindly.

The editors of Inside Surgery should really know better. Or maybe not. I saw another article on Inside Surgery entitled Can Rife Therapy Help Stop Ebola Disease? Then I saw that the editor of Inside Surgery, L. "Skip" Marcucci, MD, has completed "a fellowship in Integrative Medicine at the University of Arizona" and that he's also "a formally trained medical acupuncturist." Well, OK, then. That explains a lot. It also rather saddens me to see an article on a website called Inside Surgery that is not too different from articles by Mike Adams about "natural" cures for Ebola (one of which is based on traditional Chinese medicine).

The Food and Drug Administration has been moving against some natural product peddlers, most notably Adams, the founder and editor of NaturalNews.com, considered the global water cooler gathering place for conspiracy theories and crank cures. The FDA recently issued warning letters to three companies over fraudulent health claims regarding Ebola treatments. The warning letters, viewable here, singled out the Natural Solutions Foundation and two essential oil companies "Young Living" and "dōTERRA" whose distributors, the FDA says, were making claims that their oils could treat or prevent Ebola. The FDA sent agents to visit Mike Adams in late September to desist in spreading false claims promoted by Natural Solutions.

The warnings threatened all three companies with possible criminal prosecutions if they did not immediately answer the FDA and Federal Trade Commission with explanations of how they planned to halt making such claims. The Natural Solutions Foundation scrubbed any mention of Ebola but still portrays the federal government as unfairly attacking it for promoting what mainstream science believes are quack cures.

Will the federal government have the gumption to also take on the organic lobby and such high-profile groups such as the Organic Consumers Association?

Jon Entine, executive director of the Genetic Literacy Project, is a Senior Fellow at the World Food Center, Institute for Food and Agricultural Literacy, University of California-Davis. Follow @JonEntine on Twitter