The Gift of Asian-American Manhood

I hate to even reference the outrageous stereotype that all Asian-American men have small penises, but we are in search of healing, and I have never known of a person who healed a wound that is constantly being stabbed by simply ignoring the injury. Let's be honest: Asian-American men are not consistently celebrated by the mainstream media. I can think of heartthrobs of European and African descent and of various other cultures, such as George Clooney, Brad Pitt, Ryan Gosling, Denzel Washington, Idris Elba, Will Smith, Laz Alonzo, Ricky Martin, and Pitbull, but I struggle to think of a single Asian-American actor, musician or model who is widely celebrated for his dashing good looks and sex appeal.

I am not sure of the history and forces that contribute to the lack of celebration of Asian-American males or why the few representations of Asian-American men seem to center around effeminate, wimp and geek stereotypes. Please email me if you have some insight into this. But I do know that it is high time that we end bullying against and stereotyping of Asian-American men and start celebrating them! I contacted Ranier Maningding, the innovator behind the wildly popular blog The Love Life of an Asian Guy, and he described in detail the bullying that he's experienced as a result of being an Asian-American male, and how he's overcome it. 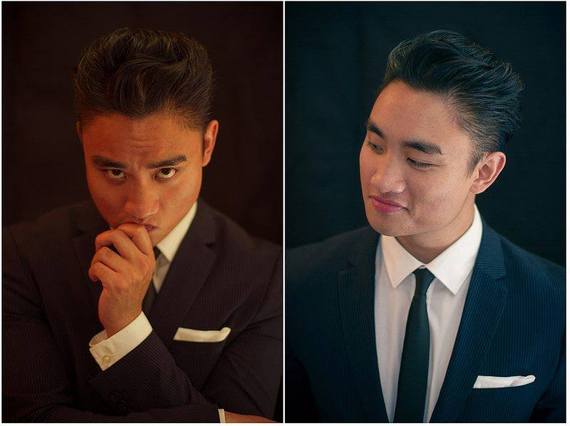 He said that during his early years the bullying centered around his racial and cultural differences. He was bullied for not looking "American." He was bullied for having rice or noodles in his lunchbox instead of peanut-butter-and-jelly sandwiches. Kids said his food smelled weird. The bullying contributed to a feeling of not belonging, and a feeling of racial and ethnic self-hatred.

But the most harmful bullying and stereotyping occurred when he became a teenager and began to embark on romantic relationships. Not only did he have the normal pressure of finding a girl who appreciated his appearance and personality, but he had to find girls who were open to dating Asian-American boys. "Time after time after time, Asian girls were saying, 'I'm not interested in you; I'm only interested in white guys,'" he recalled. He went online to research how Asian-American men are perceived and realized that Asian-American men are viciously stereotyped as being effeminate. He told me that it all boils down to the myth that Asian men all have small penises. "It's our kryptonite," he said, adding that it is the hardest myth to disprove, because he and other Asian-American men can't pull down their underpants for all of the world to see.

Personally, I am just so horrified by this stereotype. Asia is such a huge continent that I don't think that any generalizations can be made about men of Asian descent except for the generalization that they are men, and that their lineage is Asian! Similarly, I don't' believe that all men of African descent have large penises. Moreover, does it even matter? Does a man need a large penis to be a good lover? I don't think so. According to some researchers, 75 percent of all women never reach orgasm from intercourse alone, so the vast majority of men are going to have to be more "creative" to please their female partners, regardless of penis size.

Let's get back to the topic of celebrating Asian-American men and overcoming bullying. Ranier has overcome this bullying and now believes that being an Asian-American man is a gift. He feels that because of the relative lack of representations of Asian-American men in the media in general, Asian-American men are freer to create their own identities and are not as subjected as men of other races are to the pressure to be so "hard" and devoid of emotion that they suppress aspects of their humanity. As an Asian-American man, "you can play football and be big and strong, or you can relax and do what you want to do, because there is less pressure," he explained.

How Can Asian-American Men Overcome This Bullying?

My fable, Sunne's Gift: How Sunne Overcame Bullying to Reclaim God's Gift, is about overcoming bullying in order to step into one's true power to illuminate the world. Thankfully, Ranier, like Sunne, overcame bullying, and he is now thriving. He is in a loving relationship with his African-American girlfriend, and he is successfully blogging about Asian-American men and romantic relationships. Here is my summary of the steps outlined by Ranier Maningding:

Trust me: My time with Ranier was great. He is a straight shooter. Watch the video of our conversation below; you will love it!

Email me at milestalespublishing@gmail.com if you have an inherent gift for which you have been bullied and would like to discuss it in my "The Gift" series.

Check out my website at milestales.com to learn more about Sunne's Gift: How Sunne Overcame Bullying to Reclaim God's Gift.

Prior posts in "The Gift" series: