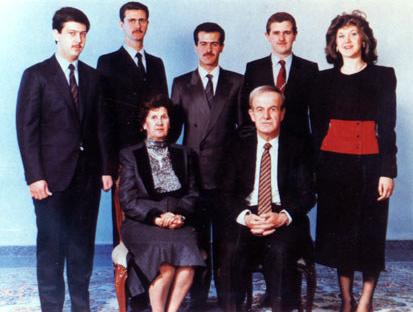 Not a politician by nature, the current president of Syria never aspired to be involved in politics. His brother Bassel Al-Assad however, was being groomed to become his father's successor. His name spoken summoned images of a vocal, shrewd, dynamic man who was a parachutist, a ladies' man, an accomplished athlete, and an outgoing statesmen. Bassel Al-Assad was very popular and idolized by the Syrian youth. Everyone was certain that he would be the next president of Syria, after his father Hafez Al-Assad, the founder of the current regime. Compared to Bassel, his brother Bashar was not as charismatic or appealing. When I was a student in high school, I would walk the busy streets of Damascus, Aleppo, or Latakia, and find the walls and windows of shops and buildings, papered with posters and photographs of Bassel. His images were even plastered across cars, but there was not a trace of Bashar's presence.

Bashar did not seek out recognition or popularity. He had no interest in being in the middle of politics, as his brother did. In his school days, he was perceived by the Syrian society as a shy, reserved, weak, hesitant child who did not inherit any of his father's or brother's intelligence and leadership. Regardless of the assumptions of the entire country, soon the invisible hand of history would sweep away these perceptions prove everyone wrong

Unlike his dynamic brother, the people of Syria viewed Bashar as a nerd, not someone with instincts or the drive to lead a country. "He's certainly not a leader," my cousin, who was later killed in the recent uprising, and his friends would say of Bashar. Even a sympathizer with the regime, Alawite Abu Hisham would say "Bashar can not stand against powers such as Israel and the United States. We need a leader who is strong like Bassel." Even Bashar's physical appearance, his thin frame gave him an image of frailness, did not project leadership and power. Nor did Bashar seem interested in projecting leadership; he was looking for a normal, peaceful, luxurious life somewhere in Europe with a prospective wife. 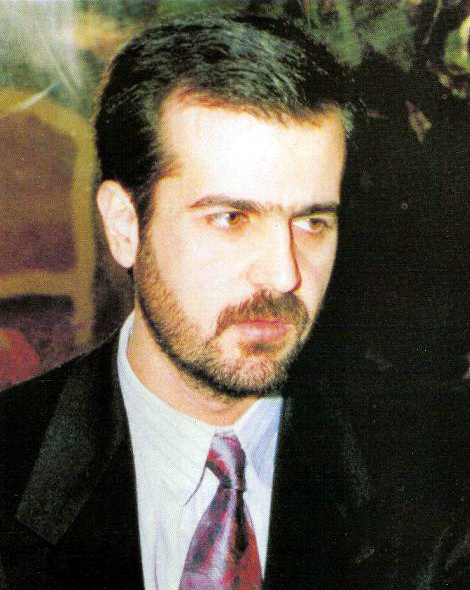 Bassel was following in the footsteps of his father, though he was a little wilder than his father had ever been. Bashar's sister Bushra was confident and influential in the country. Bashar was viewed as the "mommy's boy", and was often seen as a bit of a joke, according to Jean-Marie Quemener. ( Even during the recent uprising, people would lampoon him in a satirical web series where he is labeled as "Beesho", "baby Bashar") He was even featured in a satirical web series, in which he was labeled "Beesho" or "Baby Bashar".

However, while the entire country focused in on his alluring older brother, Bashar was educating himself. He learned to be fluent in French at the Arab-French al Hurriya School in Damascus and graduated from high school the same year that the Hama massacre was committed by his father where estimates of 10,000 to 25,000 people were killed. Bashar had a love for medicine, and he continued his education in University of Damascus. As dedicated as he was to his country, he was always more attracted to the Western style of life than his father and siblings, so after finishing his residency in ophthalmology at the Tishreen military hospital outside of Damascus, Bashar then traveled to England in 1992 to Western Eye Hospital. At the same time his father was grooming Bassel to become the future president and vivacious leader that the country expected him to be. Bashar was savoring a comfortable life in a luxurious home, and continuing on as a deeply devoted medical student. He appeared to adore the the anonymity that London offered him. 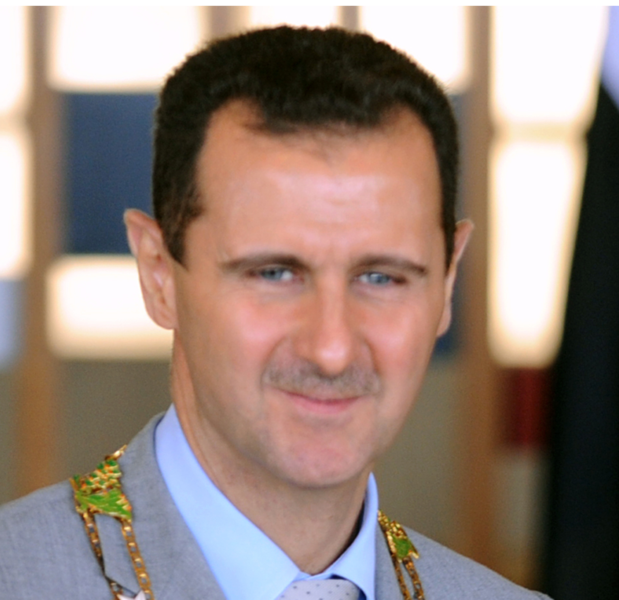 Bashar's years living in the culture of London inspired his attraction to the modernizations and Western style of living to grow even stronger. His later speeches would indicate that he always wondered why Syria had not evolved in a similar way, and that he wished his country was more modernized.

Bashar was continuing his normal life which led him in the direction of one day enjoying recognition amongst the most respectable ophthalmologists when he received the phone call that would alter his life forever. His brother, Bassel, the man whom his country admired and practically worshiped, had died as a result of a car accident in his Mercedes Benz. Since that day many have questioned why Bashar's calculative father chose his quiet, subdued son, rather than Maher who was much more similar to Bassel and even a little wilder? Why did he choose the introverted ophthalmologist son who was content with the progress of his life? No one would ever know the answer.

I remember when the images and posters of Bassel started to be replaced by that of Bashar in the streets of Damascus. His father, although sick, tried hard with the help of Bahjat Suleiman to market his son as the symbol of "hope." For almost two years after Bassel's death Bashar was not in the public eye. He was being trained in military and political affairs. After those two years Bashar was transformed, even his low, soft, and child-like voice seemed to be tougher and his stance became more confident and powerful. But many Syrian people would say that what was changed about Bashar on the surface, had not changed the man on the inside. They believe he was still an anxious man with ever vacillating moods, just as he was when he was a child. Despite these misgivings, Bashar is considered the most articulate Arab leader; he is the only one who lectures in Fusha (formal) Arabic most of the time. 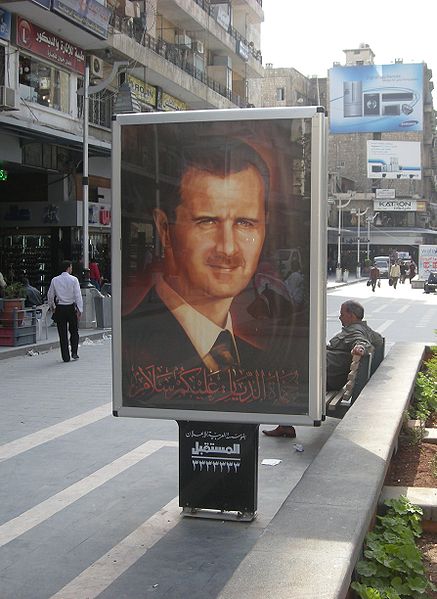 When he assumed power, the lifestyle of London and the West still occupied Assad's mind. This was made clear when in his inaugural speech he emphasized that it was time to begin modernizing Syria. But to modernize Syria and turn it into the "image" that he desired, he needed to adopt neo-liberal and capitalist policies, both of which stirred up a strong resistance from his father's old guard who founded the socialist and secular Batth Party. Not knowing the long-term consequences of marrying neoliberalism with authoritarian structure, Bashar gained short-term benefits with his vast changes, but he also planted the seed of the revolution.

In the beginning of his rule, he introduced the Damascus Spring, which included some political reforms that would suit the economic reforms he planned. But when he saw that the reaction to his political reforms were endangering his own throne, he retreated to old policies of mass repression, relying on Mukhabarat, secret and security police to enforce his commands.

Internal clashes and tensions between him and his father's old guard, who were the founders of the Alawite-Baathist and socialist regime, were inevitable. Men such as Ali Duba ( former head of the Syrian military intelligence and a close adviser to the Syrian president Hafez al-Assad) as well as hardliners such as Maher Al-Assad (commander of the Republican Guard and the army's elite Fourth Armored Division, and also Bashar Al-Assad's brother), held such opposing views to that of their new leader that chaos was certain to occur. Bashar Al-Assad favored the adoption of western-promoted neo-liberalism and economic liberalization. In order to pursue the capitalist and neo-liberal agenda, he realized that political readjustments, development, and reforms were necessary to foster enough support of economic liberalization and privatization.

During his early rule, Bashar Al-Assad, aware of the discontent, took the initiative and used his power to retire some of the old guard, sweeping them from power to reduce the conflict he faced.

The gradual increase of neo-liberal policies and privatization of the ophthalmologist Bashar Al-Assad, as well as the regime's economic liberalization project, exaggerated the inequality between the poor and the rich. Particularly in middle-class areas, mid-sized and large cities, the separation was deeply felt. While a small portion of the crony capitalists and loyalists to Assad were able to benefit from these policies, the vast majority of the population were disenfranchised. The uprising in the Arab world ( Tunisia, Egypt, Libya,..) also sparked the revolution against Bashar, who was still perceived as an inept leader.

Unable to control the uprising, the men who had been forced to retire, who were Bashar's father's old guard, surged back to power to address the situation as they did in 1982 when the Hama massacre occurred. During the uprising some Alawite people started chanting "Bashar lal iyada wa Maher lal ghiyada", meaning, Bashar should go back to the clinic and Maher should go to leadership. Did the mama's boy image in the Syrian people contribute to emboldening the people to come to streets? Did Bashar's idealistic image of creating a "Switzerland" Syria -- but still keeping the power of his throne -- play a role in the uprising? Did his vast and sudden economic and neo-liberal reforms, which in the end only benefited his gilded circle, and the lack of political reform have an impact on the current civil war? Perhaps the combination of all of these factors led to the rampant rebellion and mistrust of the people that Bashar had been chosen to lead.