By this point we all should be well aware that feminism is about equality between the sexes and operates to tear down the walls of privilege that have prevented that equality from existing for some time now. Over the years, many waves of western women have battled for equality by attacking the patriarchal regime of America's hetero-normative society. As a result heterosexual men (rightly so) have taken the brunt of the blame in a lot of issues in restructuring what is wrong with western society's view of the feminine aesthetic.

However, Twitter-beef veteran and self-described womanist Azealia Banks offers up a new perspective of the male privilege argument within her latest spat with VICE columnist Mitch Sunderland. Although undoubtedly initiated over something petty through her exchanges with Sunderland, Banks unearths a specific brand of misogyny that is rarely discussed but paramount in our society: the condescending nature of gay men towards women.

Often repackaged as a sort of campy humor, gay men have been allowed to degrade the bodies of women (specifically a woman's genitalia), discredit the range of their sexuality (via hostility toward lesbians), and deny them the ownership of their own feminine aesthetic. Gay men who use derogatory words such as "bitch" or "slut" that are traditionally used exclusively to describe women have dodged criticism by choosing to explain that their use of these words is an attempt to reclaim historically misogynistic propaganda. However, when this degrading behavior is reciprocated through the use of the gay pejorative "fag," women are persecuted in the media as homophobes and purveyors of hate. In addition to Banks, celebrities such as Rose McGowan have commented on this issue publicly as well.

Additionally, there have been countless articles about the appropriation of "gay culture" by women, as well as open resentment from gay men who believe that women are incapable of creative expression without the agency of a male curator. Azealia Banks openly rebuffs these claims in her tweets to Sunderland: "You gay bloggers try waving the homophobia flag at me like women are not the original source of everything fabulous, feminine, and clever," she proudly exclaims in a now deleted tweet. As Banks predicted, Mitch Sunderland took the homophobia route when he decided to write an article about their exchange for VICE. He goes on to espouse the essential insensitivity of her words towards gay men. However, Banks, although crass and indirect has a valid point about gay misogyny. 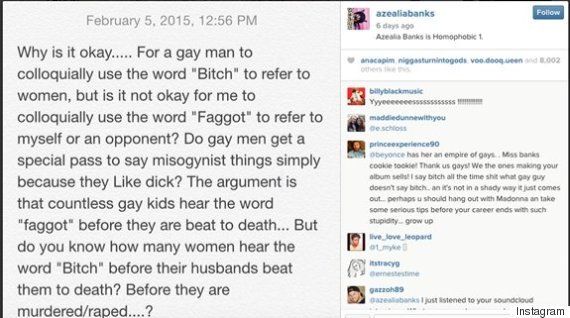 While I am certain that not all gay men are misogynists (as all men regardless of sexual orientation are not), they do enjoy a certain privilege to oppress without being held accountable for their words or actions in the way that other groups -- particularly straight men -- are. For example, the fashion and beauty industries target and are financed primarily by women, however, the individuals who are the most prominent and controlling figures in these industries are gay men, thus effectively making them the gatekeepers of the western ideal of feminine beauty.

Ultimately, based on history of fashion, it is likely going to be a gay man who decides what size women would be, what clothes she should wear, how her hair and makeup should be done, and how expressive she should be about her sexuality and self-esteem. And even when a woman can execute all of those criteria perfectly, she still faces the possibility of being subjected to the criticism that she is appropriating a culture that is technically her own. So while Azealia Banks may not "own everything" as she claimed multiple times in her argument with Mitch Sunderland, she does have a point about owning her own identity separate from the patronage of a man (regardless of that man's sexual orientation).