There are fifteen minutes left of the opening reception for Henry Taylor's solo-show at Blum and Poe, and a constant stream of people are still flowing through the door. Jeffrey Deitch (Director of Museum of Contemporary Art) stands at the top of the shallow stairs with a quiet smile, peering at the multitude like an owl. Around the corner in the gallery lobby, a mob of fans swarm around Henry Taylor.

I squeeze through the hip LA crowd to find Henry's giant canvases of briskly-painted Black folk, hanging in three ample rooms that are packed with people. A freshly plowed field is transplanted in the middle of the most spacious room. Sharecroppers or slaves, painted on tall canvases, loom against pristine white walls. In Henry's trademark style, the paintings appear unfinished.

A bare colonial dinner table with empty chairs is set in the center of the dirt, under a chandelier. It gives me goose bumps. The gallery attendant blinks the lights off and on. I weave my way through dozens of people still waiting in line to talk to Henry, and give him a quick hug. "Hey, where the kids?" he asks.

The last time the kids and I had seen Henry was in August of 2012. We had visited him in his Downtown and Chinatown art studios. I was curating BAILA con Duende at the Watts Towers Arts Center. Henry and I were two of the seventy-five Black Artists in Los Angeles (BAILA) in the show. I was thrilled that Henry had agreed to be in the group exhibit.

On Saturday, March 3, 2013, a week after Henry's hugely attended Blum and Poe opening, my twelve year old son Elias and I stopped by the gallery to interview Henry for this article.

H: Heyyy! I knew you'd bring one of your kids to protect you from me. Ahhh!

L: Henry, I see what looks like a mule in these paintings, or is it a horse?

H: My model was a little toy horse, but I was thinking about a mule.

L: Are you still waiting for your 40 acres and a mule?

L: You have a plowed field, and no one sitting at a fancy table in the middle of it. What were you imagining?

H: I was just imagining the dichotomy of wealth.

L: It's my favorite part of the exhibit. Why eight chairs?

H: 'Cause I was the eighth child.

L: Outta how many?

H: Outta eight. I'm Henry the Eighth. I'm referencing colonies an' sh*t like that. Most of the people who had the greater wealth, then, came from England. But before, it was the Native Americans. "You got the soil? Go get the land!" That's what everyone wanted manifested - the land!

L: Whose hand is that (in one of Henry's paintings)?

H: That's somebody's hand, but it ain't the hand you probably wanna get! It's like, "Owwwwwww!"

L: So the man (in the painting) is about to get slapped upside the head?

L: Any of these people your ancestors?

H: They could be. They're all ex-slaves. You know how no one took good records. It's all about that sh*t too. It's all about empathy. If somebody gets hurt on the street -Trayvon - we care. We're human-f*ckin'-beings. You identify. How can you not? You know what I'm sayin', Lili! 'Cause we all got pretty much the same mother f*ckin' history, especially Black people in America. We're all a family. It ain't like some of us came over here as Kings or Queens or with wealth. The vast majority of us came over here as slaves. So we can't front -- even if you're "high yellow" - like you -- back at some point, you had a dark one up in there. We all come from dirt dark. (Stands on the dirt) I don't know why people don't step on this.

H: They don't care. Ain't nobody said, "No!" You see a sign that say "Don't step on it?" We got control! We gotta break outta that sh*t! (Playfully kicks some dirt at Elias) I remember you when you were a little baby in Chinatown, when your Mama had her studio on Chung King Road.

L: Why'd you paint "Boy" three times on that canvas?

H: It was just like a choice - the trinity - boom - boom - boom! But that's just one reason. He's been called "boy" more than once - at least three times.

H: Naw, but I was breast fed until I was ten! Ahhh!

L: I'm sorry. You told me that. Her name was Cora.

L: I remember Cora from your corn bread painting.

H: Oxnard. But I was born in Ventura.

L: California bred. "Principal's Office." Is that part of the exhibition?

L: Did you ever get sent to the principal's office?

H: I think a lot of us did. A lot of us got told that you ain't gonna be nothin'. They try to discourage you from being an achiever -- maybe on the track field, going as fast as you can - that's all. It's sort of an indoctrination -- the principal's office. Always, "Go to the office, boy! You're on probation, boy! Go to jail, boy!" It's all part of the institution. They freed the slaves, but they have to re-enslave us, because they still need somebody to press them license plates.

L: Tell me about this piece.

H: It's a sculpture.

L: And the boxing gloves?

H: It starts at an early age. It starts on the playground: fighting.

L: Were you a boxer?

H: Yeah, I boxed for the Boys and Girls Club - but listen to me now!

L: OK. In this painting here, you've got a Black man with a white wig on, and it says "Syllable times rhythm equals mumbo jumbo."

H: And here there was text that said, "Before I met the Queen, I was a King."

H: I was tryin'a figure sh*t out. Maybe I woulda rewrote it. If I had a Sharpie, I'd do it now.

L: I have a Sharpie.

H: That's "Sugar to Sh*t." My mother used to say, "That girl was a sweet little thing, before she went from sugar to sh*t!" (Puffs on a smokeless cigarette) Don't ever smoke, man. You don't look like a family where any of you would ever pick up that nasty habit. I'm tryin'a quit.

L: What is it that, water vapor?

E: It's one of those fake cigarettes.

L: And the bleach bottle painted black (hanging on a chain from the top of a metal pole, embedded in a cement-filled car tire)?

L: Is this the first time you've seen these paintings since the opening?

H: Yeah. I wanted to work on them more, you know. And then they just took that sh*t outta my hands. I was like, "Wait! I wanna make them stronger! I wanna paint 'em for another month!" But they took my babies away! You know sometimes you look at sh*t an' you say, "Aw man, I need to fix that up or something." You paint, Lili. I know you know!

L: I know. You feel like some of them aren't quite ready. 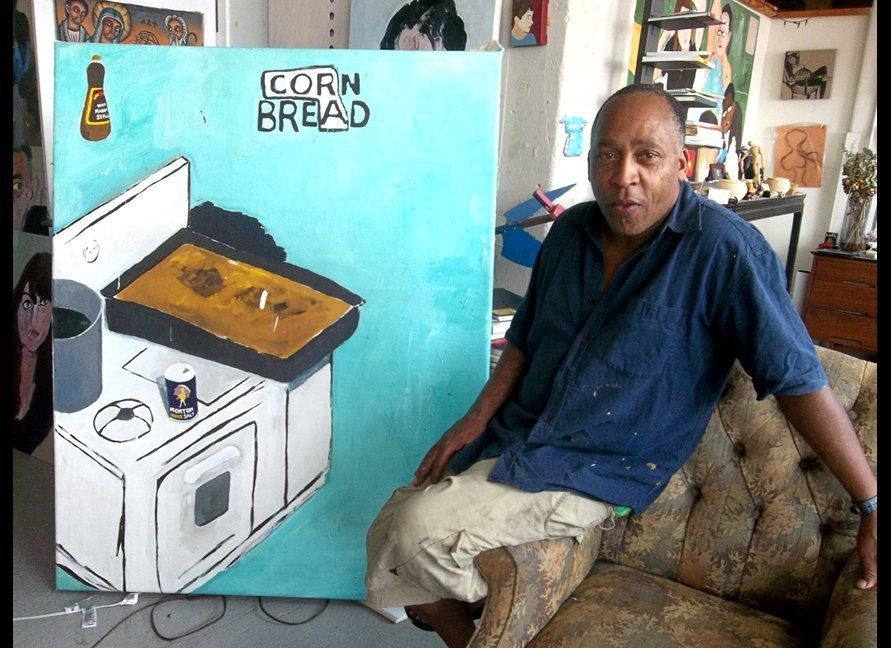