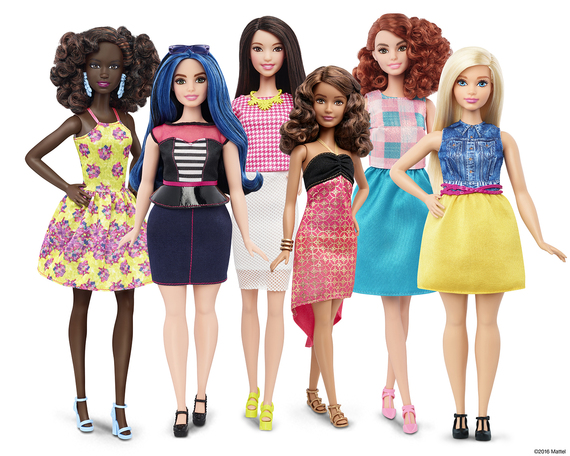 The year was 1959, and Ruth Handler, co-founder of Mattel, had a vision. She wanted to empower girls to become the best people they could be. She knew that play was the way kids did this--trying on different roles, imagining the future and so forth. The medium, however, would be something that had never been seen before -- an 11 ¾-inch doll that embodied that quintessential ideal at the time... the American teenager.

The doll, as we all know today, was Barbie. Yet before Barbie was introduced at the Toy Fair in New York that year, Handler had had to fight for her vision. The Mattel sales staff resisted, saying that that nothing like this had ever been done before. There was no such thing as a "teenage doll." There were baby dolls, and if girls wanted to play with fashion, there were paper dolls. After all, girls grew up to be wives and mothers. Handler, however, saw it much differently. She believed that girls and women's roles were on the brink of a major change, and she knew that girls would prepare for that through play. In the end, the sales staff was convinced; the doll was introduced, and Barbie was on her way. (Though she had to share the spotlight in 1959 with a more traditional doll who was a technological breakthrough... Chatty Cathy.)

For Handler, Barbie was never just a doll or a fashion toy, she was a blank slate on which girls could project their hopes and dreams, and as Barbie grew in popularity, she became an important social vehicle for girls as well. In fact, starting in the early 1960s, "playing Barbies" entered vocabularies, like "riding bikes," as a way of describing a specific play activity.

Over the years, the Barbie brand expanded as she took on careers, went on adventures and starred in her own movies. Yet one thing about Barbie remained essentially unchanged since 1959: her look. Whether blonde or brunette, African-American or Asian, she was always tall and thin, representing an idealized vision of pretty, to be sure, but one that was potentially limiting to girls' imaginations and certainly didn't represent the diversity today's kids see all around them. It was time, as they say, for a makeover.

In 2015, change began as Mattel introduced more than twenty dolls with new skin tones, hair colors and styles, more contemporary fashions (though Barbie has always been a leader in this area) and flat feet so she could stand on her own. Many of the dolls had no readily definable ethnicity, allowing girls to see her as they wanted to.

But that was just the beginning. Barbie's body shape has long been controversial in the mainstream culture. This is a topic has typically been more discussed by adults than children, to be sure. Yet whatever you think about Barbie and her body, toys do reflect the culture at large, and today we see body awareness beginning at younger and younger ages, so it is a relevant issue. On the positive side, there is growing understanding that there is no single standard of beauty. Beauty comes in all shapes and sizes, and it's smart that a toy that is largely seen as reflecting a standard of beauty accommodate that change.

In 2016, Barbie will be available in four distinct body types. Tall, Petite and Curvy dolls (which is what Mattel calls them) will join the Original Barbie. There will be more than 30 new Barbie dolls introduced with 4 body styles, 7 skin tones, 30 hair colors, 24 hair styles and 22 eye colors. As might be expected, the dolls are gorgeous, but more importantly, in addition to body types, they represent a diversity of individual fashions, attitudes and much more. Barbie has always been about the ways girls can use the inherent power of their imaginations to create real-world potential. Small wonder one of the most successful Barbie commercials of all time in 1984 said, "We girls can do anything, right Barbie?" Thirty-two years later, that's still the message, as a new generation of girls gets ready to encounter a Barbie that reflects and celebrates their world.

The picture gives you just a hint of what's in store for this line. I was among a handful of people allowed to see the concept and talk about its genesis with Mattel executives last October. Typical of the toy industry it was top secret at the time, it was kept in a locked room and unseen by most of the Mattel staff. I'm proud and excited that TTPM will be first to be able to publish complete video reviews early next month as we receive the dolls in advance of their release. Retailers have started accepting pre-orders, and the dolls will be on shelves in early March.

From a business perspective, this is a major innovation in a 57-year-old brand, one that infuses it with new relevance and opportunity and bodes well for strong sales performance. (Of course, these are only 33 dolls in a global brand worth more than $3 billion, so there will be many other Barbie dolls on the market this year for kids and collectors alike.) From a cultural perspective, the new line is acknowledgement and celebration of the level of diversity that is a reality for 21st Century kids. Barbie may not have sought her role in the cultural conversation, but she has it, and Mattel's embrace of it is admirable. From a play perspective, Barbie is as she ever was--a toy in which kids can see themselves and imagine their futures, which is the first step to making them real.

It's a long way from the doll Ruth Handler brought to market, but we're pretty sure she'd be as excited about Barbie today as she was when she was Barbie's first champion.