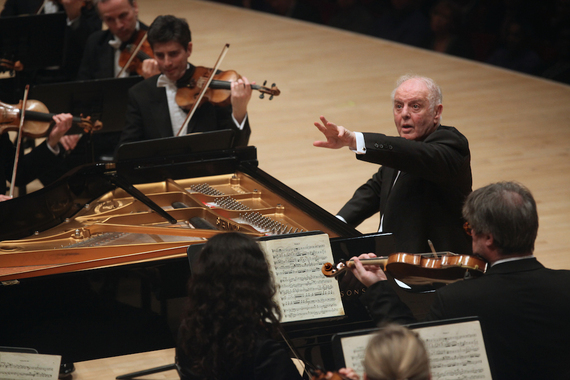 Daniel Barenboim and the Staatskapelle Berlin are performing all nine Bruckner symphonies over the course of nine evenings at Carnegie Hall, coupling each symphony with a Mozart piano concerto, led by Barenboim from the piano. Night six (January 25) of this historic Bruckner cycle--unprecedented in this country--meant Symphony No. 6 in A major, plus Mozart's Piano Concerto No. 22 in E-flat major.

The Sixth is rarely performed--the last three are the most popular. Some have even referred to it as the "ugly duckling" of Bruckner symphonies, but I doubt a single person in attendance Wednesday night would have agreed. Under Barenboim's leadership, at least, the piece was thrilling and consistently gorgeous. The shapely themes just kept unfolding. The first movement opens with a characteristically Brucknerian triplet accompaniment (reverently appropriated from Beethoven's Seventh) that sets up a broad, foreboding melody in the lower strings. Within about twenty-four bars, it flowers into a shattering fortissimo delivery of that theme by the brass. Sharp, breathtaking contrasts in dynamics were a hallmark of the performance; Barenboim is brilliant in his ability to shape phrases and control dynamics almost by willing it. He rarely beats time conventionally--it's more like a mind-meld with the orchestra, in whom he obviously has complete confidence. He makes fluid, floating movements with his arms, with occasional sharp gestures for syncopated figures or accents. At times he seemed to be just reveling in the sound and offering the occasional pro tip: hey folks, something really great will happen if you lean into this note and give it an accent. Yet his supreme control over the proceedings was never in doubt, and it yielded sumptuous beauty, grand soaring melodies, surging climaxes, and seamless transitions from one section to the next.

The rapturous but lengthy second movement can seem static or even (dare one say it) boring in the wrong hands, but one could see that Barenboim had an overview of the whole vast terrain in his head the entire time; the result was a reading with a stately tempo but inexorable momentum and profound beauty. This movement in particular showed off the deep richness of the Staatskapelle's silky, perfectly integrated strings and the glowing, crystalline woodwind playing. The haunting third theme of this movement sounds distinctly Mahlerian, but the piece, completed in 1881, predates Mahler's First Symphony by seven years. (Interestingly, Mahler himself conducted the premiere of this work.)

The third movement scherzo features two very contrasting sections that almost sound like they're from different pieces, but Barenboim managed to integrate them coherently, with an authority that seemed to will their fusion into one movement. The fourth movement searchingly traverses several remote key areas, but the home key of A major asserts itself suddenly and unmistakably in the coda. The brass, here and in the first movement, formed a cathedral-like edifice of sound, gratifyingly monumental, but stopping just short of harshness. It was as if, even at fortissimo, no one dared make a sound that wasn't impeccably beautiful in the presence of the maestro.

The first half of the program consisted of the Mozart concerto. Barenboim faced the orchestra, standing in front of the piano to lead the orchestral exposition of the first movement, then sitting down for the solo piano entrance. His remarkable ability to elicit maximum musical results from the orchestra with minimal physical movement served him brilliantly in his role as pianist/conductor. While trading musical figures with the first violins, he merely had to glance at them sideways to create a fully engaged musical dialogue. After his solo cadenza, Barenboim simply shot his left hand high in the air, and the orchestra came thundering in with synchronous perfection on the cadential downbeat. Barenboim's playing in general featured impressive multi-timbral shadings and an impeccable technical mastery that enabled him to treat all the passagework as lyrically expressive statements and not just virtuosic fireworks. Both in his playing and conducting, he seemed to be defining before our eyes the highest standards of not just Mozart performance practice but beauty itself. The langorous slow movement had the feel of a sacred ritual led by an exalted master. In the last movement, Barenboim seemed to be asking a multipart question with each two bar phrase of the opening theme and then answering it with the cadence. Sometimes he changed the timbre of the orchestra just by looking at them. It's obviously an extraordinary relationship between conductor and orchestra, and the captive audiences this week are the beneficiaries.