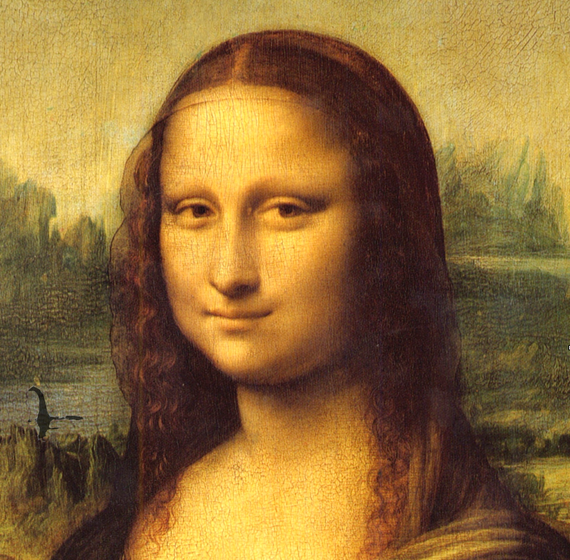 Above, the world's most famous painting, the Mona Lisa, by Leonardo di Vinci (1503). Assuming you're over the age of 10 (or so), you have likely seen this picture hundreds upon hundreds of times. It's the one painting everyone knows by name. In fact, when you just looked at it, your brain recognized it instantly. You didn't have think if you've seen it. Or try and remember. You looked at it for a fraction of a second and you immediately knew, "that's the Mona Lisa."

Now, instead of looking at it for a fraction of a second -- and then relying on recreating the image in your mind's eye -- I want you to really look at it. Study it. Look at the curls of her hair. Pretty, right? That's a oddly long neck, too, right? Is she smiling or frowning? In the background, there's a lake. What lake? Do you see it now? Do you see something out of place? Do you see something that doesn't belong?

Keep looking... it's in the lake, over her right shoulder. Now you see it, right? It's the Loch Ness monster. Huh? What? Is that supposed to be there? No. No it's not.

Before I explain why you didn't see the Loch Ness monster the first time you looked at the painting, a monster that is obvious upon a second look, try this other experiment.

Watch the video below (It's very short. I promise) and count the number of blue and red dots that you see. That's it (be sure the video starts at 00:00).

How many blue dots did you count? If you counted six, that's right. What about the red dots? Did you also count six? Actually, the correct number of red dots was seven. There were six blue dots and eight red dots (Correction: This post originally misstated that seven red dots appear). By a show of hands, did anyone see anything else? Yes? No? Go back to the video and pause at the seven second mark. It's OK. I'll wait.

OK. So what gives? Why didn't you see legendary R&B star, Stevie Wonder?

Before I explain, look at this photo. That's me, Jon Hotchkiss. Notice anything odd? 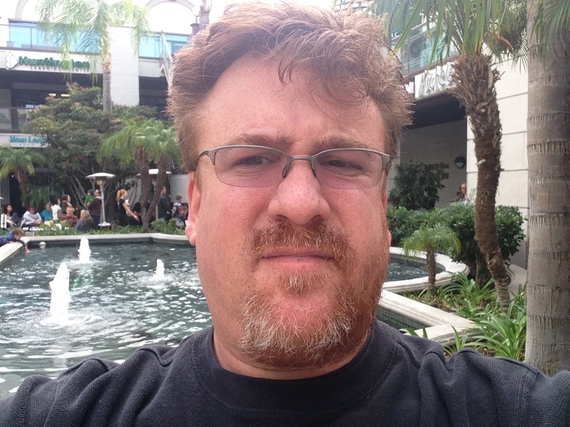 Why did you miss all of these things? Turns out, you don't actually see everything you see. Meaning, your eyes observe and take in much more information than your brain computes... So, there's stuff you see, that you don't actually see... because you're not specifically focused on it. For example, our experiment with colored dots above. Because you were so focused on counting the dots, you missed Stevie Wonder.

You also didn't catch the Loch Ness monster in the painting of the Mona Lisa because of something psychologists call "inattentional blindness." When you recognize something familiar -- say the Mona Lisa -- you spend less time focused on it and rely on your memory to recompose the image in your mind's eye. Unfortunately, this approach often leads to missing things we would have seen, had we spent more time focused.

Finally, you likely didn't notice my half-ass beard because of a phenomenon psychologists refer to as "change blindness." It turns out, our perception abilities are not finely tuned to recognize unexpected or out of the ordinary changes in our comfortable everyday surroundings. In the case of my beard, the people I engaged with at home, the bank, the supermarket, the deli, the bakery, the hardware store, the pizzaria (among several others), were not expecting me to have an oddly groomed beard and mustache, so in the moments we engaged face to face, nothing seemed out of the ordinary to them. In fact, over the four days, only one person noticed. A good friend.*

(You can see a gallery of photos of my various mustache and beard styles, here.)

The problem we all encounter from not getting the specifics correct from what we see is that we commit to choices and decisions based on partial information. We think we've seen 100 percent of one thing or another... when, in fact, we've only seen say 70 percent. Then, we rely on 70 percent of information with 100 percent certainty to make decisions, which, when made badly, can cost us time, money, energy, emotional capital, etc.

Here's just one example. The frazzled eye-witness who is certain he got a look at a burglary in progress might tell the police the perpetrator drove off in a yellow pick up truck, when in reality, it was a Hybrid Prius Taxi.

So, how can you be less stupid? Imagine a run-of-the-mill situation -- say a stroll down your block -- maybe you process, oh, let's say, 70 percent of what you see. Now, the accuracy of your perception drops considerably when you divide the focus of your attention. For example, if you're walking down the block while listening to music on your headphones, or while texting a friend.

So: You can be less stupid by being keenly aware of your limitations when it comes to what you see and taking those limitations into account when you make decisions based on what you are just "certain" you know.

This is the first of a brand new series of columns I'll be posting under the umbrella: Be Less Stupid. New Be Less Stupid posts will appear twice a week beginning December 3rd.

In the coming weeks, I'll explain (among others):

*Yes. It's possible more people noticed and didn't say anything, at the risk of being rude. However, while I won't discount that theory entirely, I will say that I engaged with many many people during the course of my experiment and to many of them I said after our brief conversations, "Do you see anything odd about my face?" Nearly all were shocked when I brought it to their attention.

Jon Hotchkiss is the creator of the new six-hour science series, This vs That.
Please click LIKE on our Facebook page so we can stay in touch. Thx.