Scott Zeiger always knew he would work in entertainment -- especially in live entertainment. Barely out of his teen years, he was already booking rock concerts and other successful live shows while at the University of Florida. Although he modestly hesitates to admit it, he was a natural at spotting talent. In 1980, when one record company mailed him the debut vinyl album from an unknown band, Zeiger, a sophomore, thought they sounded great and booked them.

That debut album was "Boy". The band was U2.

"They showed up in a van and my roommates unloaded their equipment," says Zeiger, who has won five Tony Awards as a producer. "We put the concert on stage at the Rathskeller at the University of Florida beer hall back in the days when beer halls on campuses were legal. I think we paid them $2,500."

While he insists he had "no crystal ball," Zeiger has had many moments of great discoveries. Early in his career, he produced shows for a little-known band called The Police. While still in college, he produced a humongous pep rally the night before the school's homecoming football game -- selling out their 90,000 seat stadium. Zeiger booked a rising star named Robin Williams to host. "He was just on Mork & Mindy. The World According to Garp was about to come out," recalls Zeiger, whose production credits includes The Who's Tommy, The Producers, Billy Crystal's 700 Sundays, The Music of Andrew Lloyd Webber and many more. "I'm still in business with Robin's manager. Robin and I maintained a friendship. When you're around long enough in this business, you get exposed to a lot of very interesting, talented people."

After graduate school, Zeiger's first job was in the marketing department of Ringling Bros. and Barnum & Bailey Circus. Then he was brought on as a marketing director for Pace, which promoted Broadway subscription series in cities across the country. Over time, Pace, which was owned by the Becker family, grew and grew, becoming enormous. "It was the precursor to what is called Broadway Across America today," says Zeiger. "The company went through a number of iterations. When we sold the company, to [media giant] Bob Sillerman, it became part of SFX."

Zeiger took on the role of President of SFX Theatrical Group, which he helped develop into one of the largest theatrical companies in the world. Zeiger ultimately left and formed his own company Base. Coming full circle, Zeiger co-founded Base with Brian Becker whose family owned Pace.

Through Base, Zeiger got to know Cirque du Soleil very well, and he fell in love with its masterful visual spectacle, acrobatics, beauty and elegance. He and Becker produced several of their shows, including Wintuk. Zeiger had also become close personal friends with Cirque du Soleil CEO Daniel Lamarre. The duo formed a partnership, and Zeiger launched the Theater Division for Cirque du Soleil.

"It transports you to a magical world where musical theater and Cirque du Soleil make a miraculous love child," says Ruby Lewis, who makes her Broadway debut as Paramour's leading lady, Indigo James. "We're taking this signature of Cirque: extraordinary feats of human virtuosity, really exciting music, costumes, make-up, theatricality and visuals -- and adding an overlay of story. It's the first time we have ever done a show that is a complete linear narrative with characters speaking and singing in English and it's a love story," says Zeiger. "We want people to see Paramour and say, 'It wasn't a Broadway show, it was much more. It wasn't a Cirque du Soleil show, it was much more.'" 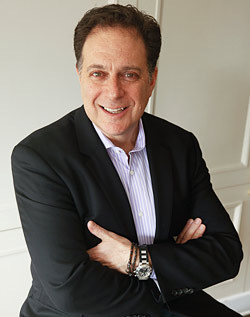