It may not have done much for international diplomacy, but Benetton's "Unhate" campaign, which featured images of world leaders in passionate lip-locks with some of their biggest adversaries, has nonetheless been declared a winner.

It's not the first time the campaign has been honored; as Advertising Age reported, Benetton's internal agency Fabrica Treviso and MDC Partners' 72andSunny were also recognized at One Show last month. But the Press Grand Prix nod is perhaps the most prestigious of the awards.

"The reason we chose this is because it stood out on the wall," Steve Jones, a U.K.-based member of the press jury, told AdAge. "It's not like traditional advertising. It's not making a point about the clothes, its brand history. It doesn't obey the rules. You can like it, you can dislike it, you can't ignore it."

Added jury president Tham Khai Meng: "It cuts through all cultures, nationalities, faith even. It has heart impact and gut impact and promotes a global debate."

The Italian clothing retailer has long been known for its provocative advertising, but the adverse reaction to "Unhate" was unprecedented, if not surprising given its subject matter. One image, which depicted Pope Benedict XVI kissing a top Egyptian imam on the lips, was quickly withdrawn from the campaign after being condemned by the Vatican.

"It is a serious lack of respect for the pope, an affront to the feelings of the faithful and an evident demonstration of how, in the field of advertising, the most elemental rules of respect for others can be broken in order to attract attention by provocation," Vatican spokesman the Rev. Federico Lombardi said in a statement cited by The Guardian, after slamming the image as "entirely unacceptable."

Perhaps less stinging, though no less clear, its distaste for the campaign was the White House. As spokesman Eric Schultz told the HuffPost World in November, "The White House has a longstanding policy disapproving of the use of the president's name and likeness for commercial purposes."

Still, Benetton officials argued that they intended the images to portray the concept of "unhate," fostering tolerance rather than making a political or possibly even gay-supporting statement. "The images are very strong, but we have to send a strong message," Alessandro Benetton, Benetton's executive deputy chairman said while presenting the ads in Paris last fall, according to The Times of India. "We are not wanting to be disrespectful of the leaders ... we consider them "conception figures" making a statement of brotherhood with a kiss."

View the "Unhate" series, including the since-removed Pope image, below: 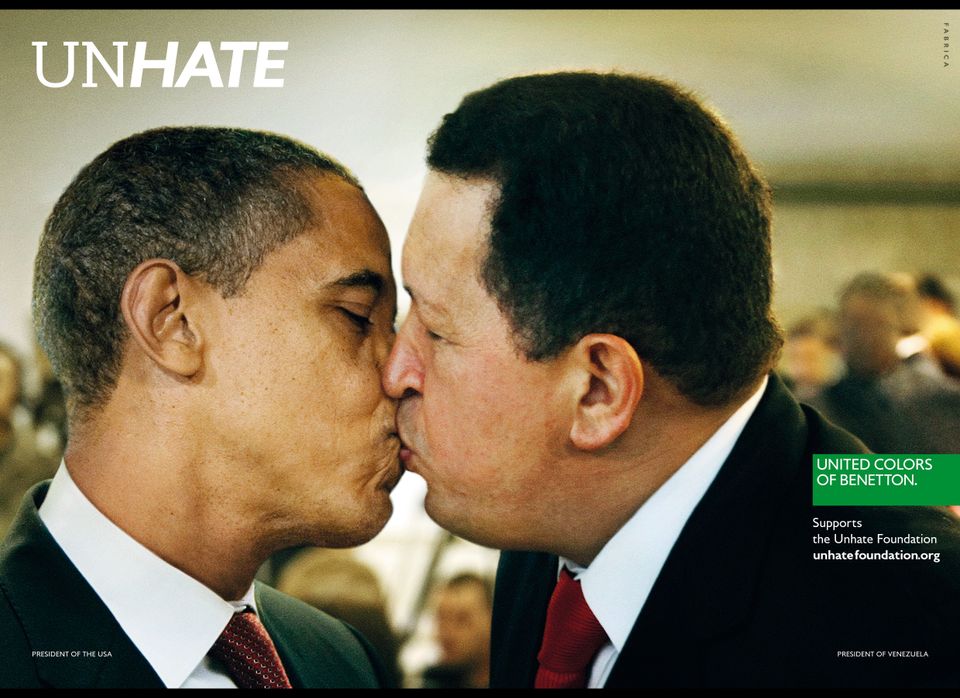