Self-sabotage is a truly amazing phenomenon. Many have been shocked to learn that Bill Cosby (the man they revered as a warm and fuzzy father figure, a role model as a parent) has, over the years, been more of an alleged sexual predator with a very different definition of what's "warm and fuzzy."

Others can't understand why, as soon as they seem to get close to achieving a goal, something in their personality causes them to screw up, undoing a lot of hard work they've done to overcome a long-standing hurdle. For most of these people, family life is a far cry from the idyllic scenes portrayed by Hallmark greeting cards and vintage television shows like Leave It To Beaver and The Brady Bunch.

Instead, children evolve into confused, angry teenagers with poor coping skills who turn into highly dysfunctional, embittered adults. When faced with the challenge of following orders or shouldering familial responsibilities, they frequently seem incapable of connecting the dots which could get them from point A to point B.

I recently watched two intense dramas in which the emotional damage borne by certain characters seemed almost unbearable. Even as they groped for answers to the many things that were wrong with their lives, it became obvious that they were working with severely limited communicative skills, much less any understanding of how to see past their own misery to understand someone else's.

One of the sleepers at the 2015 San Francisco Indie Fest was an Australian film called Is This The Real World. Despite an excellent musical score by Robert Murray Jamieson and some superb cinematography by Ellery Ryan, Martin McKenna's narrative film requires a lot of patience from viewers because its protagonist -- an alienated teenager from a highly dysfunctional family -- has a talent for bucking authority and making stupid, impulsive decisions. 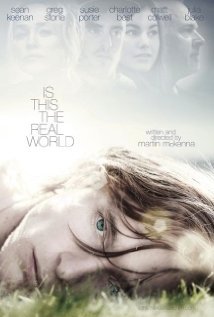 Poster art for Is This The Real World

As the press blurb notes:

"Living in the coastal town of Victoria, Australia, 17-year-old Mark Blazey (Sean Keenan) is a smart kid from a chaotic family who has just thrown away a scholarship to a private school and found himself at the local public high school, where he butts heads with an overbearing principal. At home, Mark is dealing with a jail-bound brother (Matt Colwell), a sickly grandmother (Julia Blake), and an alcoholic mother (Susie Porter). When Mark finds his first real love, the relationship is an opportunity to escape all the competing forces in his life. "

Sounds simple, no? Unfortunately, Mark doesn't like to do anything the easy way. While he enjoys practicing bicycle tricks at a nearby canal, he has no great desire to fight back against the bullies at his school who are delighted to have found a new victim. 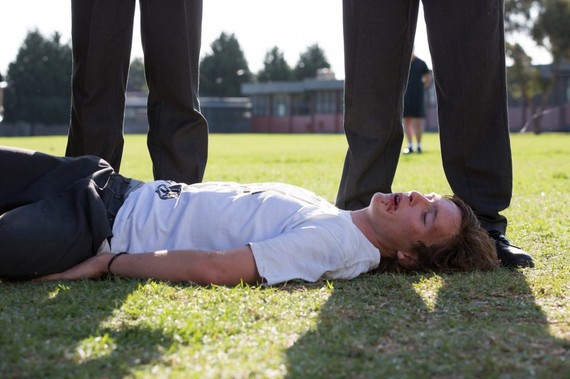 Sean Keenan as Mark Blazey in Is This The Real World

Not only does Mark continue to lock horns with the school's authoritarian principal, Mr. Rickard (Greg Stone), he makes the classic mistake of initiating a romance with Rickard's daughter, Kim (Charlotte Best). While Mark's kid sister worries about the health of their family dog (and his grandmother is taken to the hospital), his teenage rebelliousness erupts with catastrophic results.

First, he encourages Kim to go away with him for a weekend. Then, having stolen her father's credit card, he proceeds to book them domestic airline flights and rent a hotel room. Kim quickly gets cold feet and wants to go home but, by this time, neither one of them really knows what to do. 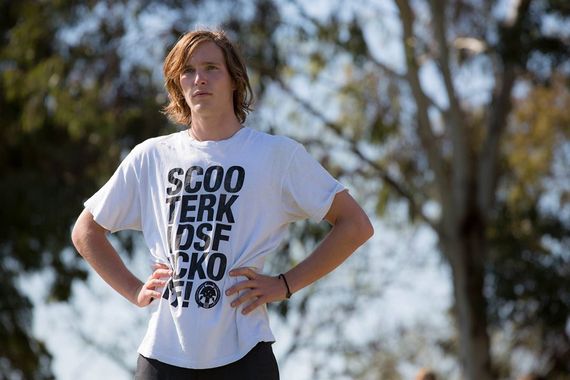 Sean Keenan as Mark Blazey in Is This The Real World

What Mark doesn't realize is that Kim's father is separated from her mother and has custody of their daughter. When he finally meets up with Mark at a local beach and the young man says exactly the wrong thing (as only a stupid teenager can), Mr. Rickard goes into a full-blown rage, choking the boy until he nearly drowns. Before Mark can even try to make amends, Kim has left town to live with her mother, Mark's back at public school under strict surveillance, his grandmother has died, and his older brother is being released from prison. The only good news is that the family dog is no longer suffering from constipation.

To his credit, McKenna's film is a well-crafted, low-budget project that understands its protagonist's problems (although it can't offer Mark Blazey much hope for a brighter future). If sullen, brooding and emotionally confused high school jocks are your kind of thing, Is This The Real World might be just the film for you. Here's the trailer:

If Mark and Kim lack sufficient life experience to give them emotional depth and make them fully-rounded characters, that's hardly the case for the souls inhabiting Julie Hébert's achingly poignant Tree. The San Francisco Playhouse recently presented Hébert's drama in a rock-solid production magnificently directed by Jon Tracy which allows wounded, battered souls to take wing, seek help, try to understand their past, and refocus their vision on a vastly different future than they could ever have imagined. 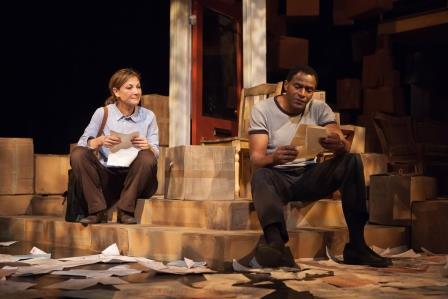 Although set in the South Side of Chicago, the action in Tree is initiated with the arrival of Didi Marcantel (Susi Damilano) from Louisiana. Following the death of her father, Didi discovered a pile of love letters written to a woman named Jessalyn Price. The letters confused her because they were so full of hope, romance, and life that they painted a portrait of a man who was nothing like the disillusioned and sullen father she had known for most of her life. Having barely been on speaking terms with her Dad for many years, to discover a whole new part of him in the letters he shared with Jessalyn made her curious about the extended family she never knew -- and especially about the half-brother she never met. As the playwright explains:

"Tree was born out of a lifetime of attempting honest conversations about race and running into minefields of confusion, hurt feelings, and unintended consequences. Originally, I started Tree as a story about two sisters (one white, one black), but it never quite took off. When I had the idea to make one sibling a brother, the play ignited. I started to write about race and ended up writing about family, and how we keep each other honest.

The other major inspiration for the play is a trove of about 200 letters my father wrote to my mother during his years as a Marine in the Korean conflict. When I read these, written by a young man of 19, 20, 21, I was taken by his youth, his dreams, his sense of humor, and the love and tenderness he clearly had for his girl. I was so moved by their relationship and their hopes for a life together, and simultaneously struck by the known facts of my mother and father's life, which had very little to do with the plans they had as a young couple. I felt there was something to be mined in terms of exploring what we actually know (and don't know) about individuals in our families." 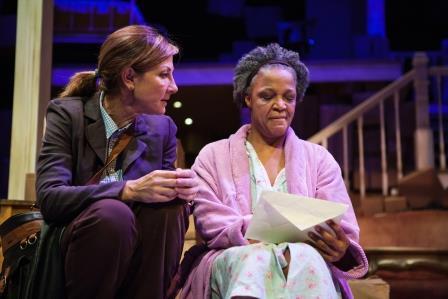 There's just one problem. Jessalyn (Cathleen Riddley) has dementia and often veers off into masculine delusions in which she dares people to suck her cock and threatens to shoot them with her guns. Whether or not Didi can make any connection with Jessalyn depends on how much cooperation she can get from Jessalyn's son, Leo (Carl Lumbly), a middle-aged chef who has been Jessalyn's primary caretaker. Dropping by to help out with family chores is Leo's daughter, J.J. (Tristan Cunningham), who is young, practical, optimistic, and cares deeply for her grandmother. 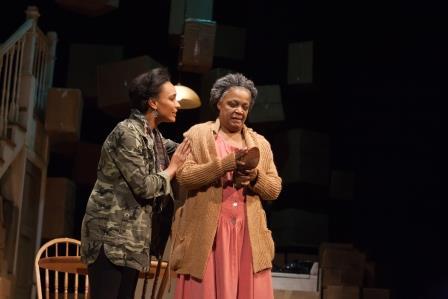 Nina Ball's unit set features a stage filled with loose papers as well as cardboard boxes in which Jessalyn has been hiding all sorts of mementos from her past (including some half-eaten sandwiches). These sacred containers of would-be family treasures might offer some solutions to Didi, who is stubborn and tenacious to the core. But how much of Didi's sleuthing will solve family mysteries from long ago -- or explain past relationships that neither she nor Leo can currently understand -- is slowly revealed over the course of Hébert's long, one-act play. 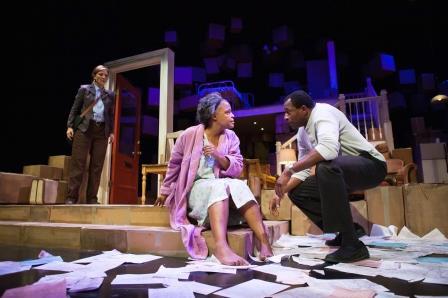 Susi Damilano, Cathleen Riddley, and Carl Lumbly
in a scene from Tree (Photo by: Jennifer Palopoli)

What I found so interesting about Tree was how it continually up-ended the expectations of its characters as well as the audience. While one might expect Didi and Leo (the walking wounded who, for many years, have led troubled lives twisted into knots by their family's secrets) to be the keenest characters onstage, that honor really goes to the two generations of Price women.

As the demented Jessalyn, Cathleen Riddley gave the kind of bravura performance that was daring, demented, and brooked no compromise. Looking more radiant than ever, a glowing Tristan Cunningham easily held her own against the older members of Tracy's ensemble. 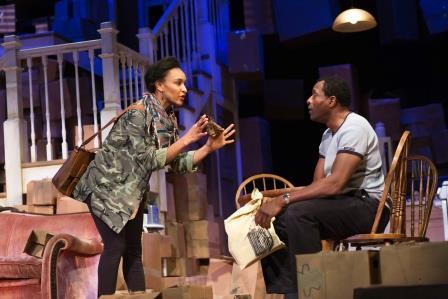 J. J. Price (Tristan Cunningham) tries to reason with her father
(Carl Lumbly) in a scene from Tree (Photo by: Jennifer Palopoli)

Special credit goes to Michael Oesch for his lighting design and Theodore J.H. Hulsker, whose sound design ranged from storm scenes to the fragility of lost memories. While there is much in Hébert's script to admire (especially the sense of a family's history being slowly unraveled as if layers of an onion were being peeled away), it's easy to get the feeling that Tree could have ended in about 20 different places. Here's the trailer: