One of the year's most touching documentary films, Best and Most Beautiful Things, makes its world premiere this month at SXSW. A provocative and joyous coming of age portrait of precocious 20 year old Michelle Smith of rural Maine, she's both legally blind and diagnosed on the autism spectrum, but the film does not pander to that. She bursts off the screen as someone immensely relatable. You'll want to know her. This is a powerful, affecting journey into a young woman's mind as she searches for connection and empowerment by exploring life outside the limits of "normal" through a "fringe community." 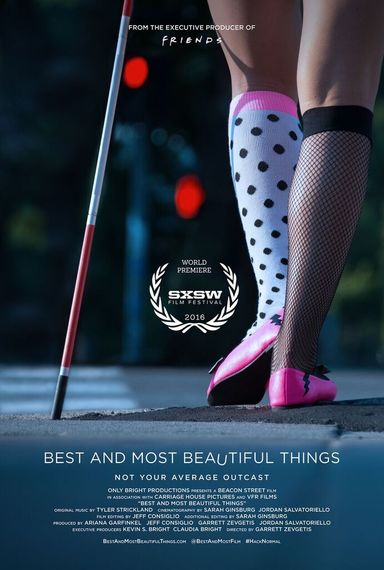 I had the pleasure of speaking with the film's Executive Producer, Kevin Bright, who has succeeded in navigating the waters of both TV (he was Executive Producer of Friends) and film (his previous documentary work includes directing the 2007 film about his vaudevillian father, Who Ordered Tax?). Kevin executive produced the film with Claudia Bright.

Xaque Gruber: What was it about this project that attracted you? How did it find you?

Kevin Bright: My involvement with the project began in 2009 when I started a filmmaking class for students at the Perkins School for The Blind in Watertown, Massachusetts. Michelle Smith was in that first class and was part of a group that made an award winning film Seeing Through the Lens. I loved the impact the film had on these students, giving them the power to tell their stories to the world. Our director, Garrett Zevgetis, was a volunteer at Perkins who at that time was making a short film about the impact of Helen Keller on current Perkins students. After seeing an early cut, my recommendation was to focus the film on Michelle as a "modern day Helen Keller". Garrett filmed Michelle - it was a 20 minute short that became a feature film and now here we are with a premiere at SXSW.

XG: Let's talk about Michelle Smith. She is legally blind, on the autism spectrum and lives in rural Maine - with those details she seems plucked from a Stephen King novel. She's bound to win over many fans and hearts. Tell me what it was like working with her and do you see any of yourself in Michelle?

KB: Michelle is an inspiration to me. She could roll over and be a victim of her disability, instead she embraces it and challenges the rest of us to step out of our comfort zone and be open to different people and life styles, "unlearning normal" as Michelle says. Everyone falls for Michelle because she draws you in, makes a connection, but sometimes, can really shock you. Pity is not what she seeks, it is not in her vocabulary.

XG: Michelle's "provocative fringe community"- how much can you tell us about it? Did her participation in this community make you squirm?

KB: It is pretty universal that your teens through your twenties is a time of exploration and experimentation, which includes sexuality. When I first became aware of Michelle in this community, I was concerned about her safety first and foremost, but also was afraid the audience would judge and define her by this one aspect of her life. I was her teacher and I felt responsible. Michelle made me aware that I knew nothing about this world and that my fears were being generated by simply being uninformed. Through Michelle I became informed and my concerns went away after seeing the positive impact the community was making on Michelle's self esteem and life. It still makes me squirm a little, but I'm getting there.

XG: Do you have a favorite scene in the film?

KB: I have two. The first is when Michelle goes to watch her brother play in a basketball game. I think our editors Jeff Consiglio and Sarah Ginsburg did an incredible job of putting the audience squarely in Michelle's shoes. The second is when Michelle goes swimming with her boyfriend at an indoor pool on a winter night. The two of them alone, Michelle exhibiting wit and self-confidence, you forget that she is blind and all the challenges she is facing. Instead, you just get to sit back and enjoy two young people playing together in love.

XG: You are established in Hollywood as a TV comedy producer. So what is it like for you to step into the world of documentary film producing? And what have you learned about producing documentaries from Best and Most Beautiful Things?

KB: On one hand, it's all storytelling, whether it's an episode of Friends or someone's life, telling that story is the key. Who Ordered Tax was about my dad Jackie, I knew that story well. To get Michelle's story right took many years of patience to allow it to unfold. I wanted to pull the plug several times. But, the incredible team of filmmakers that I got to work with convinced me to keep going. This film really belongs to them, Garrett (director/producer), Jeff and Sarah (editors), and producers Ariana Garfinkel, Jeff Consiglio, and Jordan Salvatoriello. I am very proud of this collaboration, especially because three fellow Emerson College Alumni worked on it with me, which brought it all full circle.