Border walls are the instruments of last resort in the armory of geopolitics. Their current proliferation on a global scale is an expression of failed diplomacy in response to conflict, persecution, and migration.

The Wall between Mexico and the US is now deeply ensconced in the consciousness of communities on both sides of the international boundary line. In the fortifications' shadows lie the armies of law enforcement, equipped with state-of-the-art weaponry and advanced surveillance technologies. Behind them lurk an archipelago of detention, prosecution, and deportation facilities, all part of a justice system pressed into service for the "Border Industrial Complex" (BIC).

The facts about the fortification of the US-Mexico border are well-documented. The BIC is less well-known, but as pressures increase for even stronger border control measures, all citizens should be alert to the dangers posed by the unchecked growth of the BIC juggernaut. 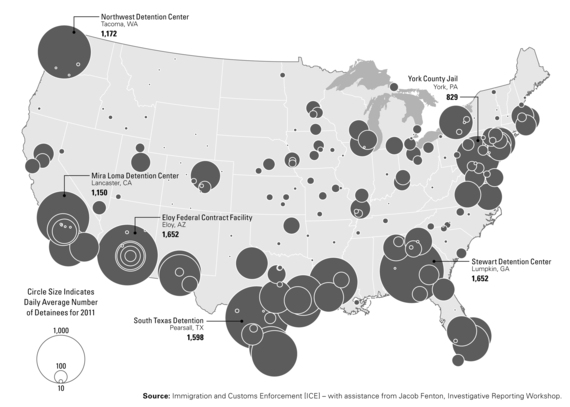 ICE detention facilities are geographically clustered along the US-Mexico border, but also extend along coastal zones where there are cities with a large migrant presence. © 2013 Michael Dear. Artwork by Dreamline Cartography.

Origins
After 9/11, the Bush administration created a Department of Homeland Security (DHS) charged with ensuring operational control over the nation's borders. At all levels of public and private sector, webs of patronage, funding, and partnership emerged to grab the dollars made available through the DHS's "Secure Border Initiative."

The centerpieces of the DHS operations were the US Customs and Border Protection (CBP) - formerly the US Border Patrol - and Immigration and Customs Enforcement (ICE). Under Bush (and later, Obama), DHS tentacles penetrated deeply. The mega-agency incorporated functions of the Department of Justice, FEMA, and the National Guard, as well as agencies with no direct responsibility for immigration, such as the Department of Fish & Wildlife, and the Bureau of Land Management. The legitimate mandates of federal agencies not involved with national security were frequently overridden, most notably the suspension of environmental protection laws.

Through ICE, the DHS also outsourced its obligations to states and municipalities, thereby co-opting many borderland communities into the protocols of national security. And it contracted with myriad private corporations (such as the Corrections Corporation of America, Boeing, the GEO group, and Blackwater) for the construction of physical and virtual fences, plus the provision of security training and services, private detention facilities, and deportations.

Metastasis
The CBP has authority to operate within a 100-mile zone inside the nation's borders, including along water boundaries and both Mexican and Canadian borders (a territory encompassing two-thirds of the US population). It possesses stop-and-search capacities that exceed those of local police. Journalist Todd Miller concluded that the entire country has been transformed into a "virtual border zone," which he refers to as a "Border Patrol Nation."

As years went by, an increased belligerence toward law-abiding citizens has become characteristic of CBP operations. In one notorious 2008 incident, Vermont Senator Patrick Leahy was stopped at a CBP checkpoint 125 miles south of the US-Canada border. Ordered to get out of his car, the Senator asked the agent whose authority he was acting under. The agent - acting beyond the 100-mile limit - pointed to his gun and replied: "That's all the authority I need"

The CBP expands its reach through the use of Predator drones, which it also leases to other federal agencies such as the FBI and the National Guard. In 2009, its drones were used 30 times by other agencies; by 2012, the number of rentals had risen to 250.

As the numbers of migrant apprehensions increased, ICE's detention system expanded into a far-flung network of more than 500 county jails, for-profit prisons, and federal jails, where detainees were held prior to deportation. Many municipal governments regard prisons as economic-development opportunities that promise new jobs and revenues. Private detention centers were soon being built on spec in anticipation of increased demand. According to Tom Barry, these immigrant detention centers represented the "new face" of imprisonment - "the speculative public-private prison, publicly owned by local governments, privately operated by corporations, publicly financed by tax-exempt bonds, and located in depressed communities."

Another kind of national security extension is the 1033 program of the US Defense Department which, in 2013, distributed close to $450 million in surplus military equipment to various agencies, primarily the USBP but also state and local police. In the San Francisco Bay area, for instance, Alameda County obtained a decommissioned Coast Guard cutter, and the City of Concord acquired an armored personnel carrier formerly used in Kuwait. Other communities throughout the US received assault rifles, night vision glasses, body armor, aircraft, and grenade launchers. The much-criticized 1033 program is weaponizing the nation's police forces.

Abuses
The CBP is often accused of excessive force, including situations that resulted in death. A culture of impunity is part of citizens' rebuke. An examination of over 800 reports of alleged abuse by border patrol agents, occurring between 2009 and 2012, found that in cases where formal adjudications were issued, an astonishing 97 percent resulted in an outcome of 'No Action Taken.' In 2014, new guidelines were issued to ensure greater restraint by USBP agents.

ICE officials have also been accused of exceeding their authority. In 2013, revised guidelines were issued governing its conduct during raids on private homes in search of undocumented migrants. ICE contracts with many city and county law enforcement agencies were terminated after legal actions demonstrated that the local police exceeded their authority and practiced racial profiling in the pursuit of suspects. 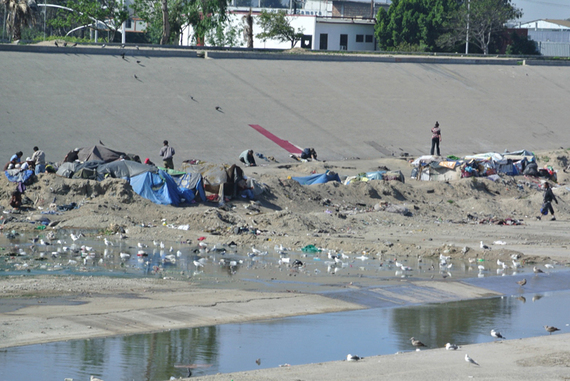 People deported by the BIC often end up homeless upon their return to Mexico. Shortly after this photograph was taken, this encampment in the channel of the Tijuana River was removed by police. © 2015 Carolina Gonzalez, used by permission.

Immigrant advocates reserve their most bitter complaints for privatized, for-profit jails under contract with ICE: they were often under-regulated and non-accountable; detainees were sequestered in unsafe conditions without representation or adequate medical care; and inmates were frequently transferred unnecessarily within the detention system. Through the process known as 'churning,' tens of thousands of inmates were removed to far-distant jails, making it more difficult for them to maintain contact with legal counsel and families, as well as distributing the income generated from providing detention services.

People held in detention centers often supply labor in kitchens and laundry rooms, for which they usually get paid $1 per day. The irony in this coercive use of detained migrant labor is that the federal government - which prohibits hiring illegal workers - is now the largest single employer of undocumented immigrants in the country. Excessive use of solitary confinement is another bitterly contested practice in detention centers, currently undergoing review.

Future
A vast network of public and private interests is vested in border security industries. It encompasses flows of money, contracts, influence, and resources among an army of employees, lobbyists, corporations, banks, public institutions, and elected officials. The $46 billion budget proposed in the (stalled) 2013 Senate immigration reform bill calls for 19,000 more border patrol agents, 700 more miles of fencing, and billions more dollars for expanded security technologies. The trade publication 'Homeland Security Today' referred to the bill a "treasure trove" for contractors in the border security business.

The entrenched interests and insatiable monetary appetite of the burgeoning BIC calls to mind a warning issued by President Dwight D. Eisenhower in 1961: "We must guard against the acquisition of unwarranted influence ... by the military industrial complex. The potential for the disastrous rise of misplaced power exists and will persist."

By substituting the term "border industrial complex" in this quote, we may begin to grasp what is at stake in the unfettered expansion of the BIC. Too many people stand to benefit from its continuation. It threatens to engulf every aspect of ordinary citizens' lives. It is becoming too big to fail. And it may be coming soon to a neighborhood near you.

MICHAEL DEAR is professor in the College of Environmental Design at the University of California, Berkeley. A paperback edition of his book, Why Walls Won't Work: Repairing the US-Mexico Divide (including a new chapter on what should be done about the border walls) is available from Oxford University Press.