In the past weeks, Ethiopians have protested at Saudi Embassies around the world because of recently posted videos documenting wanton violence against Ethiopian migrant workers in Saudi Arabia. This occurred during a Saudi crackdown on unregistered foreign workers in the Kingdom, which followed a seven month amnesty period. After the November 4th deadline, Ethiopian migrant workers in Riyadh attempted to protest the police tactics in the round up and became the target of angry vigilante mobs that beat and killed at least 3 Ethiopian workers, and injured many more. This violence is only symptom of the larger problem that is the lack of legal protection for migrant workers around the world. The situation is particularly acute in the Middle East, and the abuses against Africans in the region have become increasingly publicized in the past decade.

Abuse and mistreatment of migrant workers in the Middle East is well understood in the African Diaspora. It has been a year and a half since the tragic death of Ethiopian domestic worker Alem Dechasa-Desisa in Beirut, who committed suicide after being publicly beaten and threatened with deportation. Outrage followed that incident, but change has been slow or non-existent in Lebanon and the region since then.

Some of my suggestions are:

Support Local Activists and Organizations in the Gulf and Lebanon

How many of us know that there is an annual Migrant Domestic Worker's Day march in Beirut? It has been coordinated for the past two years by local organizations to advocate for the ending of the 'Kafala' labor sponsorship system that ties migrant worker's residence permit to a specific employer in Lebanon.

These five organizations are knowledgeable, committed, and provide relevant services to some of the estimated 200,000 domestic workers in Lebanon, in addition the large number of Syrian refugees in Lebanon. They have also transparently reported on the state of migrant workers in the country, and documented racism in Lebanon. We have to work to find more organizations in other countries, establish contact and offer support to help them build capacity if necessary.

One incredible individual is Rahel Zegeye; she is a domestic worker, film maker, playwright and actress who has already produced a film, "Beirut", and a play, "Shouting Without a Listener", which deals with the different experiences of migrant domestic workers in Lebanon. Rahel moved to Beirut from Addis Abeba over 12 years ago, and has become a well-known advocate for domestic workers rights in Lebanon -- often speaking on the issue for various international media.

Collaborate With Other Migrant Worker Sending Countries and Diasporas

In 1995, Flor Contemplacion--a Filipino domestic worker--was executed by hanging in Singapore for a murder that she said she wrongly confessed to under duress. The national outrage following her murder prompted the Filipino Government to create the Migrant Workers and Overseas Filipinos Act of 1995. This law created standards for labor protections, prevention of human trafficking, access to health services abroad, and systems for assisting Filipino citizens endangered in foreign countries. It is not a perfect law or system, but does at least set standards for the treatment of Filipino citizens abroad. Some Filipino organizations in the US have incorporated migrant worker's rights abroad into their advocacy and awareness outreach.

There are also large communities of Sri Lankan, Indian, Egyptian, Pakistani, Nepalese, Eritrean, Indonesian, Sudanese, and Somalis working in the Middle East--among others. Filipinos and Ethiopians both have large communities in the Washington DC Metro Area, Los Angeles and the Bay Area. There is considerable capacity within these different Diaspora groups in the United States--and other countries--to collaborate and support migrant workers. 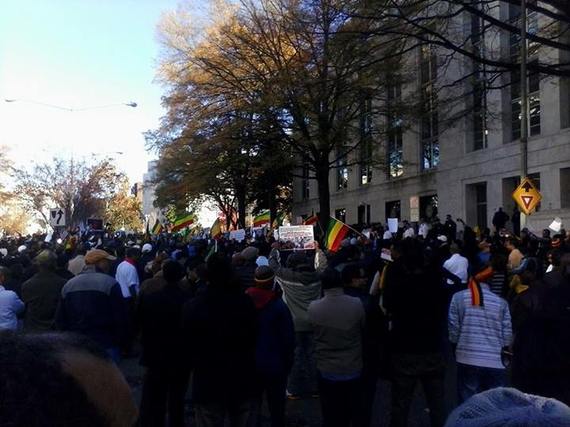 As the international protest movement against migrant worker abuse grows, Ethiopians are stepping up to publicly address this issue within our own community. The young African Diaspora has been heavily invested in changing the image of Africa from the negative caricatures of our childhoods. However, there does not need to be a choice between sharing the positive and telling the truth. Abuse thrives in silence. We should continue to acknowledge our people in Riyadh, Sinai, or Doha, as openly as our communities in London, Stockholm, or Los Angeles.

The online messaging of this protest movement is also important. I understand how painful this issue is for many Ethiopians, but there have been too many chauvinistic and negative comments about Arabs and Islam--a religion followed by millions of Ethiopians. Xenophobia--even online-- is not an acceptable response and alienates potential allies.

Many think that the Ethiopian Government has been too slow to act in the preceding years as the documentation of abuses of Ethiopians in the Middle East became publicly available. There have been positive developments recently, but the current outrage is also the result of a lack of success by the Ethiopian Government in ensuring the rights of its citizens abroad. Some Ethiopians living abroad have also complained that they do not receive help or assistance from the Ethiopian embassies or consulates in the region when they report abuses.

In October 20133, the Ethiopian government enacted a temporary ban on all Ethiopians traveling abroad because of the reported abuses. There was a similar travel ban on working in Lebanon enacted in 2008 that has not stopped migration to Lebanon. There needs to be a comprehensive process--led by Ethiopia and other migrant sending countries-- for creating an international plan for regulating labor migration and eliminating fraudulent or exploitative employment agencies. The tactic of migration bans may exacerbate human trafficking because of the elimination of legal avenues for leaving the country. Imposing a migration ban can also be viewed as Ethiopia--among other countries--not having the necessary bargaining power to make progress regarding labor agreements with the Gulf Countries and Lebanon.

A positive development is that the United Nations International Labor Association (ILO) signed a Memorandum of Understanding agreement with Ethiopia to develop a framework for the protection of Ethiopian workers in the Gulf States, Lebanon and Sudan. Ethiopia also signed the Palermo Protocols in June 2012, which are international anti-human trafficking agreements. Unfortunately, Ethiopia has yet to sign ILO Convention 189--a comprehensive domestic worker labor rights treaty (in comparison the Philippines was the second country to ratify ILO Convention 189).

The success of any lasting movement formed from these protests will rely on us using our skills and investing time in helping to create systems to ensure the accountability of both migrant sending and receiving governments. The global African community and our allies in Washington, DC--among other cities--have an opportunity to assist the migrant community beyond remittances. Religious and social organizations have powerful and reliable fundraising structures to support the right projects. Churches and mosques could develop direct partnerships with religious institutions in the region to provide direct services.

There are increased opportunities to communicate directly with the migrant workers and activist community in the region. Online videos and social media have helped to finally document the previously widespread stories of abuse. Of particular relevance is a crowd mapping site-- "Middle East Domestic Help Abuse Reporting"--which juxtaposes reported incidents of domestic worker abuse over a map of the region. It is a sobering webpage, but also an effective tool that can be useful to service providers and domestic workers. Publicly documenting allegations of abuse can be helpful to pressure all governments involved to investigate allegations.

The labor rights of domestic workers in the United States are below the level of ILO Convention 189, even though the US Department of Labor plays a "leading role" in the ILO. New York and Hawaii are the only states that have comprehensive Domestic Workers Bill of Rights. California--a state with large Ethiopian, Filipino, Arab, Latino and South Asian communities-- recently passed legislation to pay overtime to domestic workers, but has yet to enact comprehensive labor protections for domestic workers.

The National Domestic Workers Alliance is the leading organization promoting state and national legislation that will finally standardize domestic worker labor laws in the US. They can also use support and resources. I think it would highly hypocritical for any Diaspora group to fight for the rights of migrants abroad while not fighting for the same protections for workers at home.