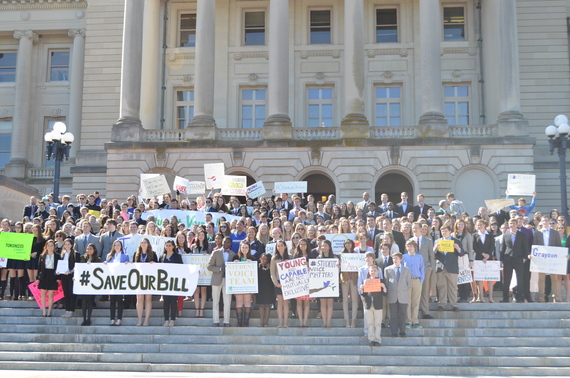 Chances are you've seen the viral videos of students yelling at professors and the arguments over Halloween costumes. Or maybe you've also seen the long lists of demands from student groups that run the gamut from demanding that student fees from African American students go to the Black Student Movement rather than the University to calling for the resignation of various University Officials. But there is something going on in America that is bigger than a click-bait video or an isolated campus clash.

Students around the country are registering real and valid complaints with their education institutions that go far beyond planning dances, critiquing school lunches, and collecting "coins for change." What's more, the latest wave of student protestors is not restricted to college campuses. High school students from Massachusetts to California are also speaking out about disconnect between education ideals and practice and inequities that pervade the system.

As organizers for student-led advocacy organizations, we have directly seen and heard from thousands of young people who are ready to be more than just passive consumers of our schools. We are beginning to realize that we can and should be active agents of our education destiny.

Increasingly, students like us are taking lessons learned in social studies classes to our principals, our local school boards, and even our state capitals:
These examples show the power of student voice to strengthen the institutions designed to serve them. Adam Fletcher, executive director of the non-profit Soundout, defines Student Voice as, "any expression of any learner about anything, anywhere, anytime, related to learning, schools or education." He says that embracing student voice through meaningful student involvement is a, "model for school improvement that strengthens the commitment of students to education, community and democracy."

Why is this happening now?

Social movements spearheaded by students have shaped events worldwide. The Little Rock Nine and Children's Crusade of the 1960s led the charge against segregated schools. Undergraduates pushed universities to divest from Apartheid South Africa in the 1980s. And in 1995 a Canadian 7th grader led the international campaign against child labor. However, with the advent of social media, the Student Voice movement has found a new spark, catalyzed by students' ability to network, share ideas, and organize through Twitter and Facebook.

What we are seeing now is how traditionally marginalized communities--including youth and minorities--are saying enough is enough.

Jeremy Heimans captures this phenomenon in his article "Understanding New Power." He writes, "New power operates differently, like a current. It is made by many. It is open, participatory, and peer-driven. It uploads, and it distributes. Like water or electricity, it's most forceful when it surges. The goal with new power is not to hoard it but to channel it."

Power structures from the world of politics to the world of education are flattening, giving way to a new wave of opportunities to influence them from the inside out. Students who want to carve out their own destiny and who are coalescing around the #StuVoice movement are seizing these new opportunities.

Why this work is necessary

Now is the time for schools to capitalize on this energy, to allow students a platform to share their perspectives. Doing so will increase student buy-in, which will ultimately lead to increased student achievement. We know from personal experience that when students feel their time spent in school is productive and that they can make real, visible changes within their schools, they put more effort into their learning. But this isn't just supposition; If you ask any student when they felt most interested in their school, we bet we can predict their response. It's when they were involved, as a partner, in both the design and implementation of lessons that appealed to real world problems.

Psychologists Alfred Bandura and Mary Gist call this belief in one's ability to do something "self-efficacy." According to them, an increase in self-efficacy is associated with an increase in buy-in and performance. In the context of the education system, students must feel that they are important to the school and that the school is important to them. Self-efficacy correlates with high expectations and internal locus of control. If adults respect and seriously consider the feedback of students and allow students a greater degree of control over what happens at school, student self-efficacy will increase, as will their motivation and academic achievement. Both actions can be accomplished by allowing students to serve as voting members on school governance bodies.

Strong businesses have already capitalized on the psychological principles of self-efficacy and buy-in. In a recent report, Censeo Consulting encouraged companies to prioritize stakeholders based on "the degree of influence they have on program outcomes" and "their attitudes toward the program."

By engaging stakeholders, companies ensure consumers are invested in the success of the business, understand the importance of the product or service, and provide the company with valuable feedback. Failing to engage stakeholders can result in negative consequences for the business. Although we believe students are more than mere consumers, the consumer-stakeholder engagement model strongly parallels the student voice one.

Adults wring their hands, wondering how they can improve education in America. Well, we have the answer: an engaged and confident student body is the key to any broader school improvement effort. Without that buy-in, adults will always be working on the margins of the school culture.

Our education system works best when it engages and inspires everyone it touches. Students all too often feel ignored and neglected. The current, prevailing feedback model limits the growth and possibilities of both our students and our entire education system. It constrains our country's economy, welfare, and future.

We have an opportunity to embrace, channel and unleash student voice to rethink school in America. What if we used this energy to support students to be more than just passive consumers of our schools but instead, co-creators of our own learning?

Student voice may not always be traditional or even convenient, but if we want to ensure the best possible learning outcomes, our activation as full partners in the endeavor is essential. After all, young people are not just the future; we are a vital part of the present.

The movement is live. #StuVoice