You're not supposed to judge a book by its cover, but these covers offer a lot to criticize.

This week, a HuffPost editor noticed this set of books from publisher Gibbs Smith while running errands. 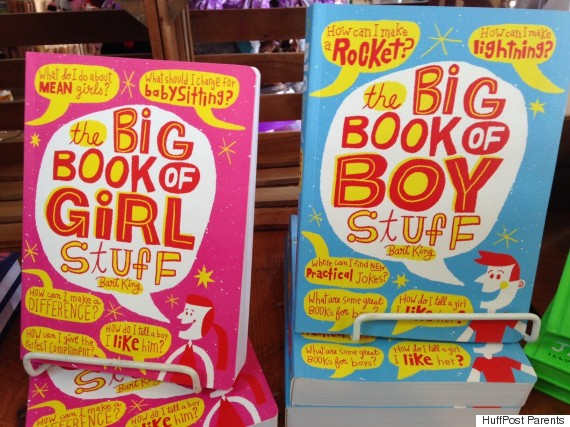 The Big Book of Boy Stuff cover asks "How can I make lightning?" and "How can I make a rocket?," implying that curiosity about science falls under "boy stuff" -- whereas the "girl stuff" edition asks no equivalent STEM-related or even academically minded questions. (And, as this mega-viral Verizon ad demonstrated last year, little girls are very receptive to these sorts cues about gender expectations.)

Instead, The Big Book of Girl Stuff cover asks, "What should I charge for babysitting?" which prescribes an association between being female and taking care of children. Another speech bubble poses the question, "How can I give the perfect compliment?" -- a topic which should be equally relevant to both boys and girls.

The question "What do I do about mean girls?" -- with no similar query on the boys' book -- promotes the harmful stereotype that girls are emotionally manipulative bullies and ignores recent research that found "mean boys" to be just as prevalent.

Furthermore, The Big Book of Boy Stuff's cover question "Where can I find new practical jokes?" supports the "boys will be boys" trickster archetype.

While it may be tempting to say, "What's the big deal? If you don't like the books, don't buy them," the problem is that -- however subtle they may be -- these ubiquitous messages about gender and sexuality have a profound effect on young kids.

As Lisa Wade, associate professor of sociology at Occidental College, told The Huffington Post in December, children are very aware of these sorts of cues about gender. "[Young kids] learn their gender identities are very relevant and they learn that there’s a lot of very complicated rules about how to be a girl or a boy," she said, adding. "They’re at that stage of life where they’re trying to learn the rules.”

Kids themselves have spoken out about the problem of gender-specific books. One little girl's viral complaint letter persuaded a publishing house to remove "for boys" from a children's book cover.

As more kids and parents speak out against gendered books, hopefully authors will take note and stop promoting these gender stereotypes. At the end of the day, boys and girls don't fit into these neat little boxes. And we shouldn't make them feel like they need to.

More:
Parentsgendered toysHeteronormativity
Newsletter Sign Up
Raise the kind of person you'd like to know
Subscribe to our parenting newsletter.
Successfully Subscribed!
Realness delivered to your inbox