If you live in the U.S. and have a child, preparing them for a time when someone will say something negative about their appearance (hair, skin, etc.), is commonplace. It's like a special brand of parenting boot camp that only those who are raising children of color get to attend.

You think you're ready. You have asked your best friend, neighbors, consulted folks with PhD's. Read articles and of course, you've prayed. Because what else can you do? You know it's coming.

And yet I can say that I was taken by surprise. Having lunch one day with my daughter, her best friend and her best friend's mom, I heard something that I had hoped I wouldn't hear just yet. My child's BFF had told her mom just that morning that a little boy in their class had called my girl black and ugly.

I took a breath and then another. The mom confessed that she almost cried when she heard that. I don't think I wanted to cry. My anger seeped in the hot water of maternal instinct, the pot of constant activism and on the stove ignited by ignorance.

I waited until I got home later on that night and as we stepped in the house and took of our shoes, I began.

"Baby, did Eric (not the child's real name) say something mean to you?" The frog princess looks pensive, turns her mouth as if not finding anything in her thoughts and says "no." Then the pause as her brain remembers something "he just said I was black ugly," she says already dismissing the comment as if it did not matter.

I smile on the inside because these words seemed to have slid right off her skin. At least this time, it seems she has escaped without a permanent scar left there by careless words. But I still find it important for her to understand the seriousness of his comment.

"And what did you say?" I question.

I wanted to cry. I wanted to scoop her up and cry into her hair. But I resisted the urge understanding that this was one of those milestones that we have to walk through, one of those moments that will shape the little foundation already laid. 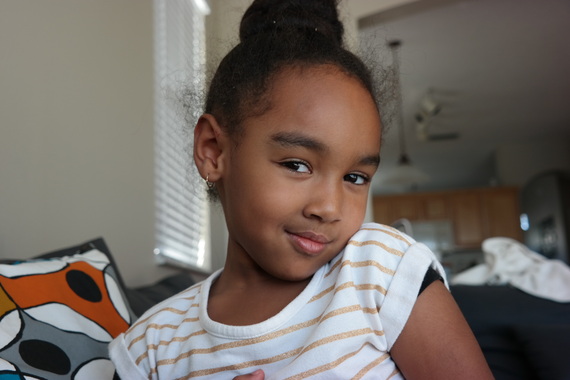 Since before she was born, I have infused her spirit with positive affirmations. As a Dominican born woman, I focused so much of my energy into ensuring that she loved her hair. Having not worn my hair curly until well after I was 25 and understanding the negative words of people that "loved" me had toward my hair, I made a conscious effort to inject positivity into that beautiful head of hair that I lovingly combed for hours at a time. And it's working.

It was ignorant of me. I heard it from my own family as a child so, why did I not think it would happen this way?

We crawled into my bed and I held her hand as I spoke. She asked "Mami, you wished this color for me when I was in your belly, right? Because it's like Titi Q's and because it's like your coffee." She said this with satisfaction and finality as a simple explanation for her hue and I smiled.

As I held her, we spoke about her heritage. About being African American. About the fact that she is also an Afro Latina. Then, because I didn't want Eric's words to ever haunt her psyche, I said

"Baby, you know we don't use the word stupid in this house, right? I need to use it right now. There are some people that are stupid and ignorant and will not like us because of the color of our skin. But, the words they say do not matter because they are not true."

I try my best to explain that what we think of ourselves matters as opposed to what an ignorant person might say.

"I know, Mami. I'm the perfect color." she repeated.

We continued to talk, we spoke of our heritage. As is always the case, we laughed. I saw a confidence in her that I don't think I acquired until adulthood. I prayed. Not just for her but for every other child out there who will encounter ignorance on their path. That they may see past the words and understand their own strength, their heritage and the fact that those words don't define them.

I also pray for kids like Eric who isn't at fault in this case. We all know hatred is learned. There's this perceived otherness within the Latino community that at times scares me. I don't know where to start to fix it. I don't know where the brokenness lies that make us, collectively, deny our roots and identify as something other than the melting pot that we are.

The conversation has begun with so many others before me. And it shall continue with me sharing this story and starting another dialogue. It'll pass down to you and to our children who will hopefully not need to have this conversation except as a reminder of how the past used to be in comparison to the future that they've created.

My Afro Latina Frog Princess, you are smart, kind, funny, courageous and beautiful. And if you should ever hear the words "black and ugly" again, I hope you'll allow them to shimmy down your spine and land squarely beneath your foot, where they belong.

My frog princess, smart and beautiful as always.