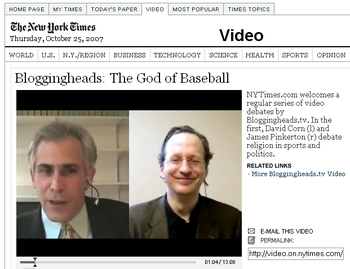 Something else for the NYT's online shopping basket: Bloggingheads! Like the "Freakonomics" blog before it, lovably wonky political webcam-debate blog Bloggingheads.tv has been adopted by the New York Times, which will run excerpts from Bloggingheads "diavlogs" (like a dialogue, but on a vlog, get it?) three times a week. The inaugural vid features BH old-timers David Corn and Jim Pinkerton (wherein "old timers" means "have been with BH since the beginning"), and the NYT is pink with pride, pushing the new feature on the homepage both yesterday and today (though apparently yesterday's link didn't work. Oops!).

Bloggingheads founder Bob Wright (himself an original face of BH along with co-origa-vlogger Mickey Kaus), described it as a win-win for both sides: "NYTimes.com gets great content and Bloggingheads.tv gets high-quality traffic steered its way." ("High quality" is relative — obviously Bob has forgotten about how many weeks Shamu spent dominating the most-emailed list.) The content-sharing relationship will work well for BH, though, because the NYT is only featuring one of the number of "topics" from a given diavlog — readers who want more can follow a link to the BH site to see the rest, which is a terrific traffic boon for BH, and zero investment in content creation on the part of the NYT. Though Wright declined to elaborate on the nature of the financial arrangement between Bloggingheads and the NYT, this is another example of how the NYT is smartly beefing up its online offerings via partnerships, as with the Freakonomics deal, while continuing to build on the web presence of its in-house web personalities like Brian Stelter and David Carr.

Meanwhile, it's an impressive coup for Bloggingheads, which has been quietly building up from the two-person debates between Wright and Kaus to a site with a library of diavlogs between a growing number of contributors. Last January, ETP reported that the site had gotten a cash infusion from C-SPAN founding chairman Bob Rosencrans; judging by this latest plum, it seems to have been a good investment.

Fun fact: Today's vid is billed as "A Discussion of Baseball, Politics and God" which Corn launches by inveighing against sportwriters who invoke God to explain the outcome of athletic events — which is ironic, because I, too, have mocked a sportwriter in print for so wondering "how else to explain" the White Sox victory two years ago. Where is the irony, you ask? In the sportswriter: It was Tyler Kepner...of the New York Times! What a coincidence! God must totally have made it happen.

Update and Correction: David Corn was actually inveighing against the Colorado Rockies general manager for telling USA Today that God was implicated in the Rockies' success. The Lord giveth to the Rockies, the Lord taketh away from my ability to understand plain English. Sorry David Corn!

Bloggingheads: The God of Baseball [NYT]

Related:
NYT Gets Its Freak On (Omics)* [ETP]Bloggingheads Gets Cash Infusion [ETP]

*Alternate headline to fit the pattern that we established above, but rejected for obvious reasons: "NYT Gets Good (Blogging)Head(s)." Well, maybe the reasons aren't that obvious.