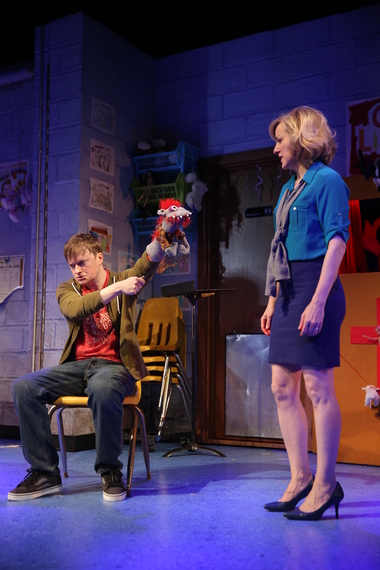 A demon-possessed puppet takes over a Southern Sunday school classroom in the scarily hilarious Hand to God, which celebrated its opening at the Lucille Lortel Theatre in New York's West Village on Monday night.

"The first time somebody saw it, they said you should probably be in jail," jokes playwright Robert Askins, soaking in the party and rave reviews after the performance. "We always have a lot of psychotherapists that like to talk to me."

Askins, who sports his signature round glasses and a well-pressed vest, grew up in Texas, where his mother had a puppet ministry. ("It was not like this puppet ministry, but it was a puppet ministry," he's quick to add.) The show had three sold-out runs at the Ensemble Studio Theatre, where Askins is a member, in 2011-12 before MCC Theater selected it for a production.

And all of the folks who were a part of the process from the beginning four years ago, along with many shiny celebrity guests, filed into the crowded basement space of 49 Grove for the after party. "MCC has taken this play which was fantastic and developed it in a way that I've never seen a theater do," says Geneva Carr, who has been working on the piece since its inception and plays a mother struggling with the loss of her husband.

Intentional and unintentional shoulder rubbing permeates the packed space, and just then, Carr is enthusiastically greeted by a friend. "She's going to marry my son!" Carr exclaims, infected by the excitement of the evening. "My puppet son," she clarifies. "I'm engaged to Tyrone and Jason," the woman quips. "It's confusing." She means actor Steven Boyer, who plays Jason a young, lovable boy dealing with his father's passing by clinging to his security blanket of a hand puppet, named Tyrone, who turns against him upon, you know, becoming possessed by the devil.

Says Boyer, who was at the very first reading of the play and made his own sock puppet from the get-go:

And all kinds of responses were in the house at opening. Stars like Matthew Morrison, Judith Light, and Zosia Mamet, all MCC Theater alums, could be seen (and heard) laughing and reacting to the provocative subject matter. "The best reactions are when the audience reacts to other audience members reacting," says director Moritz von Stuelpnagel.

One of the play's most memorable, and disturbing scenes, is a fairly graphic sex scene between Jason's puppet Tyrone and his friend and crush Jessica's puppet. (Fun fact: Askins actually had one of his first flings in puppet class with a girl named Jessica.)

"I always think of a friend of mine who delivers babies and has like a life-or-death job, and I think, what am I doing when I'm saying, 'Can he come on her tits?' " von Stuelpnagel jokes of directing this scene. "Or, 'Reverse cowgirl doesn't look like anything, let's try a different position.'

"People have told me that the puppet sex turns them on, which is an interesting reaction and not as uncommon as you would think," Boyer adds.

But the puppets aren't the only ones getting it on onstage. "It's such a sexy ridiculous play, and I'm kind of an uptight, old lady so to get on the stage and get eaten out in front of an audience is pretty shocking," Carr says of her character's unexpected interaction with a student in her class. "I didn't tell my boyfiend what the play was about; I just told him to come. And the producers at MCC were worried that he was going to break up with me because he was going to be so shocked."

But shock and awe is what Askins is going for. "People will act like it's Jerry Springer. The fact that we can bring that kind of energy to the theater is really valuable," he says. "I love it when they scream."