Bo and the First Family have just survived their first 10 days together in the White House. Now that the Obamas have gotten to know Bo, what do they say he's like?

"Kind of crazy," said Mrs. Obama to a group of youngsters visiting the White House yesterday on Take Your Kids to Work Day. She gave an example, "It was like 10 o'clock. Everyone was asleep and we hear all this barking and jumping around. The president and I came out and we thought somebody was out there. And it was just Bo. He was playing with his ball."

It seems that this statement has drawn as much criticism as a random statement Mrs. Obama might make about something truly important to the nation, such as foreign policy would. "They should have gotten a pound dog," says one commenter, as if shelter mutts are perfect pets. This type of commenter forgets that of the millions of dogs relinquished to shelters every year, most wouldn't be there if they were the perfect pet for their families. Overall, behavioral issues are the number one cause of relinquishment to shelters, with one study revealing 28% of relinquishment due to behavior. Other responders to a Huffington Post article say Portuguese water dogs are too energetic. The term "crazy" is inappropriate. One person even says that the Obamas are "crappy dog owners" -- as evidenced by the fact that Bo has been seen pulling Mrs. Obama and the daughters when they walk him on leash.

As a veterinarian and animal behavior consultant, I say, "Back off. Give them a chance." Bo's just a puppy. If you've been around a healthy puppy recently or, for that matter, a young child, you know that they normally have lots of energy. Also, critics should know that even though this is the First Family's first dog, the Obamas have already done many things right.

What the Obamas Have Done Right with Bo.

They Selected an Older Puppy

The first good decision the Obamas made was getting an older puppy. While young puppies provide many precious moments, like infants and toddlers, they require an extraordinary amount of time, planning and energy -- usually much more than one predicts.

The inconvenience of having a young puppy starts with the potty training. For a few puppies, training is as easy as just keeping the pup on a regular eating, drinking and potty-outing schedule where he is taken out every several hours for several weeks. However, the majority of pups placed on such a lax, abbreviated potty training program remain only partially house-trained. They learn that outside is a good place to go but don't understand that inside is off limits. In fact they may even come inside after an extensive play or exercise period and then relieve themselves on your expensive carpet.

The full potty training protocol for young pups requires that at night your pup sleep in a pooch-palace or travel carrier big enough for him to lie down and turn around in, but not large enough for a bed plus bathroom. During the day it requires taking him out on leash at regular intervals and waiting patiently, silently, and relatively stationary, until he does his duty. If he doesn't, he goes right back into his carrier and you repeat the procedures 15 minutes later until he does go. As he finishes you reward him for a good job and let him have a play session.

Basically the goal is that the puppy learns that the only opportunity he has to potty is when you take him outside. At all other times he's either attached to you on leash so you can keep a close eye on him, in his palace which is too small to double as both potty and bed, or having a closely supervised play session where your eyes are glued to his every move so you can be sure to recognize any signs that he's ready to potty again. Every time you take him out and he does not potty, he goes back in crate for the 15 minutes and then you repeat the cycle again.

Usually after a week puppies know they should potty when they go outside but don't quite understand that they should not go inside. It takes several months of consistency before they make outside-only their habit.

If this potty training process sounds like a drag, you're right. The only thing more inconvenient than following this plan is having to randomly clean up after your dog in the house for the dog's entire life.

It sounds as though Bo came potty trained. Initial reports were that he had not had an accident in the White House. He'll still need a strict potty training routine in his new spacious home for several more weeks to months though. Even adult dogs frequently need to be retrained somewhat in every new home they visit so they understand where the new bathrooms are and sometime to signal when they want to go out. This training may only require a day.

Bo Has a Gregarious Personality

A presidential pooch has to be friendly to all people, confident in new environments, and polite in public -- both around people and dogs. These are characteristics that need to be cultivated starting well before 12 weeks of age. This early learning is so important that The American Veterinary Society (AVSAB) Position Statement on Puppy Socialization recommends that owners take their puppies to socialization class starting as close to 8 weeks of age as possible.

"Puppies go through a sensitive period for socialization where they are primed to learn that unfamiliar people, environments, objects, and animals are safe. During this time they can also easily learn how to interact with other animals appropriately."

Those puppies whose owners do not make enough of a daily effort to get them completely comfortable with these things often end up with a dog whose default setting is to be fearful of new things. They can even learn to protect themselves by becoming aggressive with strangers and unfamiliar dogs. In fact, aggression due to fear is the number one problem seen by veterinary behaviorists and Ph.D. behaviorists.

So far it looks like Bo has been had the right experiences. He seems to seek attention from unfamiliar people and seems relaxed and comfortable even with all the cameras aimed at him. This is in contrast to Barney, the Bush's Scottish terrier, who had a reputation for being aloof and snippy with non-family members -- two neon signs that a dog may be suffering from fear.

The Presidential Family Still Has Some Work to Do

Socialization Must Continue For a Year or More

Bo will need continued socialization. He'll need appropriate supervised play with other puppies and adult dogs and to meet new people who reward him with things he likes for politely. Says Meyer, "He should be exposed in a gradual non-frightening way to all the types of things he'll be expected to cope with as an adult."

That means regular visits to new locations to see different sights and sounds, including getting used to elevators, traffic, sirens, planes, and even helicopters. Since he'll need to be trimmed and groomed regularly, he'll need to continue to learn that these and other medical or husbandry procedures are fun.

The next year is extremely important because dogs go through a fear period during 6 months to over a year, when perceived scary experiences can have a dramatic, lasting affect. By continuing to give the pup positive experiences such as treats, kibble, a toy or pat on the head (assuming he shows signs that he finds these rewarding), the Obamas can help prevent later fears from developing.

As the First Dog, of course Bo will need to know how to be on his best behavior. He has received private tutoring from the trainer of Senator Ted Kennedy's dogs. For the training to transfer to the White House, the Obamas and all of Bo's caretakers will need to continue his lessons.

Realize that it's easy for dogs to learn sit, down, come and heel. These things can often all be taught in just 15 minutes. For these behaviors to become a habit in Bo's daily life rather than just a trick, the people in his life must all band together to deliver the same message -- that good behavior earns rewards and bad behaviors do not get reinforced.

Dogs catch on quickly because they only need to do whatever gains them rewards. It's the people who take months and sometimes years to learn, because they have to recognize everything they do that effectively rewards good behavior and accidentally rewards undesirable behaviors. That way they can behave appropriately around Bo every time they interact with him rather than inadvertently rewarding the wrong things. This is one reason why dog owners generally should continue taking their dogs to dog class for the first year or more.

It's also important which approach the Obamas take regarding training. As a president who focuses on listening rather than conquering both allies and foes, Mr. Obama will want to use an equally nuanced approach to dealing with Bo. No choke chain, pinch collar, electronic collars, alpha rolls or other methods that focus on punishing bad behaviors and dominating the dog.

Such corrections, even when done in a quiet, assertive, calm manner, are still inappropriate, especially in public -- similar to spanking a child. They send the wrong message, and are not easy for youngsters Sasha and Malia's age to perform. Additionally, the American Veterinary Society of Animal Behavior (www.AVSABonline.org) has cautioned against their inappropriate use in their position statements and guidelines on the use of dominance theory and punishment in animal behavior modification.

While Bo will need rules and guidelines for behavior, his training will need to focus on a kinder, more scientific approach. His family will need to realize that every interaction they have with him is a training session and that they must communicate the rules by rewarding him as he performs the desirable behaviors and removing or preventing rewards for bad behavior. Then they'll need to stick to their plan until good behavior is a habit for Bo. 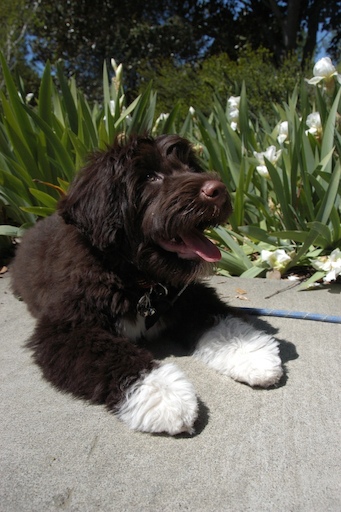 Portuguese water dogs can be trained to
be calm if the humans know how to reward calm behavior
and avoid rewarding hyper behavior.

Is It Starting to Sound as Complicated as Foreign Policy?

No doubt, the Presidential Family has a lot of work to do with the First Dog, Bo. Given their track record of making calculated and thoughtful decisions, I'm betting even if Bo has a long way to go right now, they'll do all the right things for Bo and he'll be one of the best First Dogs ever. And, of course, he'll be a great friend to Sasha and Malia.