Last year, I had the privilege of traveling to a small Mayan village in the Mexican state of Campeche. There, I photographed the local customs of Day of the Dead or Dia de los Muertos, including one of the most unusual death rituals in the world: "Bone Washing." 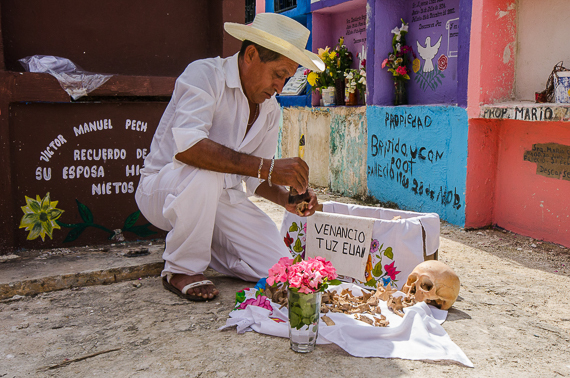 Day of the Dead, A bittersweet celebration, is observed throughout Latin America, even as far south as Peru, and is one of the most diverse and unique cultural holidays in the world. This tradition, honoring departed loved ones, stirs sentiments of joy as well as sorrow. Families come together on November 1st and 2nd, to build altars, clean graves, and invite the dead into their homes. At this time of the year, adherents believe the dead return from the hereafter to visit the living. These departed souls come back to commune with friends and family and to enjoy indulgences unavailable in the afterlife. While the traditions of Day of the Dead often evoke visions of sugar skulls and women dressed as the skeletal Catrina, there is so much more to this time of honoring the dead. 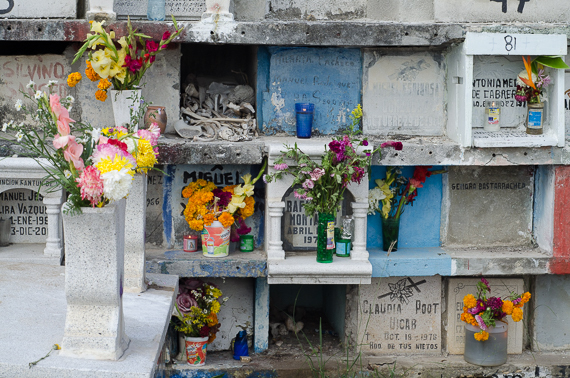 Last fall, I asked a Mexican friend to help me find an exceptional Day of the Dead celebration and we ended up visiting a very unusual graveyard. Situated in the state of Campeche, on the northern side of the Yucatán peninsula, this graveyard is located in a traditionally Mayan region of Mexico. Quite different from the rest of the country, in many ways, Campeche feels like a separate Mayan nation. Here, much of the rural population live in palm-thatched houses, speak various Mayan based languages, and maintain numerous pre-Hispanic traditions. Several of these pre-Hispanic customs are part of 'Hanal Pixan,' the regional term for Day of the Dead. The most unusual of these, "bone washing," takes place in a dusty town of about eight thousand--Pomuch, Campeche. 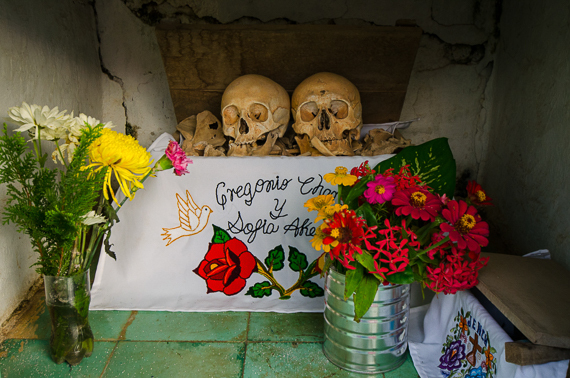 During Hanal Pixan in Pomuch, decedents honor the dead through the annual ritual of "washing" or brushing the bones of dead loved ones with a piece of cloth or small brush. The local custom is for family members to exhume the skeletons of the deceased after they have been buried for three years, when the flesh has turned to dust, and carefully clean the bones. Once they have been cleaned, the bones are placed in an open wooden box that has been lined with embroidered or painted linens. These boxes are then displayed in small cement niches in the graveyard. Every year, families return to the graveyard to re-wash the bones of their relatives, change the linens, and leave offerings of fresh flowers and lit candles. Although perpetuating an unusual practice, the people of Pomuch take much pride in caring for and presenting the bones of their ancestors. Pomuch is the only town in Mexico to still honor this tradition. 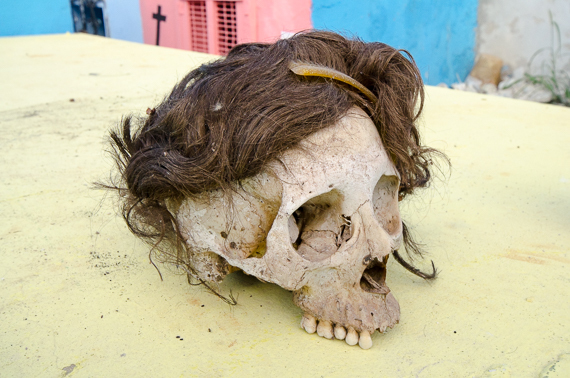 Skull with hair and comb, hair is one of the slowest parts of the body to decompose -- Pomuch, Campeche

Hanal Pixan, is a more extensive version of Day of the Dead and lasts for over a month. It begins about five days before October 31st with the washing of bones, building of altars, and the preparing of special food. The main festivities include parades, music, dancing, performances, street-food, and late night vigils, which take place October 31st through November 2nd. Unlike other parts of Mexico, Pomuch closes the graveyard in the evening and all reverent nighttime activities happen around the home altar. Early in the morning of November 2nd the faithful meet amongst the graves and hold a Catholic mass. A very Mexican tradition, the mixture of Catholicism and freshly washed bones, exemplifies the local combination of pre and post-Hispanic cultures. A week later, during El Bish, locals prepare a second feast for the dead--complete with pibipoillo. Finally, at the end of month, family members ask the dead to return to the spirit world and the holiday culminates with a special candle ceremony. 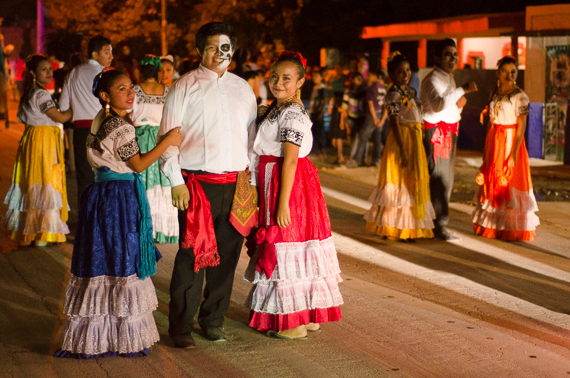 We spent a week in Pomuch, commuting back and forth from Campeche City. During that time, we stayed many hours in the graveyard, observing the bone washing ritual and chatting with locals. The current graveyard is quite small and only about a hundred years old, but the tradition of bone washing in Pomuch has very ancient and mysterious origins. In all of our interviews, we could not find anyone practicing this ritual that actually knew why or when the tradition began. Everyone we met told us that they had learned bone washing from their grandparents and on-and-on for generations. 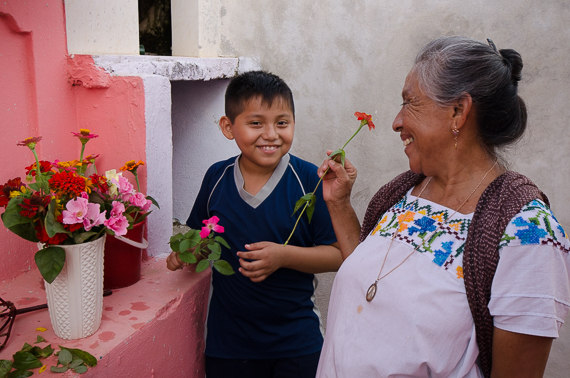 A boy learns how to prepare the bones from his grandmother -- Pomuch, Campeche

While no one in Pomuch seemed to know the exact origin of bone washing, this unusual ritual is most likely pre-Hispanic. One night in Campeche City, we attended a lecture given by anthropologist Edgar Daniel Pat Cruz, who specializes in Mayan culture. He speculates that the ritual is as old as ancient Mayan civilization in the area and comes from a long history of keeping the bones of one's ancestors close to home. Historically, Mayans buried their dead in the floor of their houses or in their backyards, often interred in large ceramic pots. Throughout the year, families would ceremonially honor both the deceased and Ah Puch, the god of the dead. 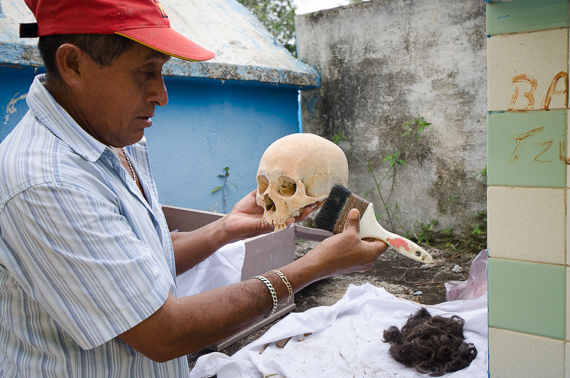 Senior Venancio Tuz Chi, has been a hired bone washer for over twelve years, he is paid $1.50 per skeleton -- Pomuch, Campeche

On the 31st of October, people in Pomuch prepare altars for the dead in their homes. Simpler than the elaborate altars of Oaxaca and Michoacán, contemporary Mayan altars are probably much the same as they have been for thousands of years. Comprised mostly of food, altars are covered with bananas, oranges, honeyed fruit, rice, tortillas, green pozole, pibipollo, hot chocolate and atole. With the exception of pibipollo, the highlight of every altar is the famous local bread. Pomuch is known throughout Campeche, for having wonderful baked goods, and the annual Hanal Pixan "pan de muerto" is the most renowned. These breads, baked in wood-fired ovens are often flavored with anise and decorated with floral patterns or are formed into human effigies. This special bread makes a tasty addition to the altar's tantalizing feast, one bound to lure even the pickiest of souls. 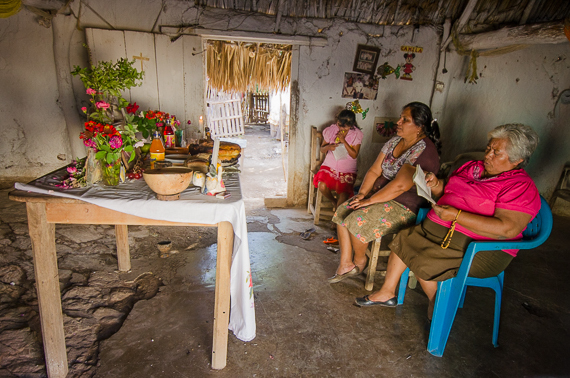 The dead are venerated over two nights and the symbolism of each specific night can be seen in the adornment of the altars. On the night of the 31st, deceased children are specially honored and altars include clay whistles, toys and sweets. The following night, on the 1st, the altars are transformed to venerate deceased adults with offerings of spicier food, liquor, and tobacco--each altar reflects the preference of the departed. Whether built for an adult or a child, each unique altar bears the lives of lost loved ones and often include photographs, worn rosaries, or small personal effects. Altars may also be decorated with candles, incense, flowers, clay figurines, saints, and crosses. In Campeche City, there was an altar making competition where we met a group of young Mayans from the village of Xibalche. This youth group came to present an altar that had three levels representing the heavens, the earth, and the underworld. In Pomuch, most altars were presented on large flat tables, but we did find occasional examples of these symbolic multi-level offerings. 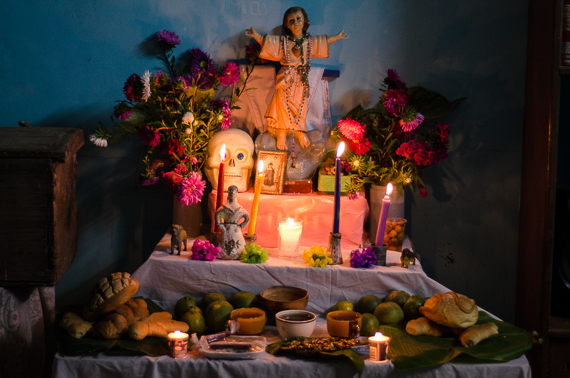 On the morning of November 1st, people get excited to cook the traditional Mayan food of the dead, pibipollo. Pibi is the Mayan word for oven and pollo means chicken in Spanish but, together, they refer to a food much like a cake-sized tamale. For the Mayans, the act of cooking and eating pibipollo re-enacts burial, disinterment, and, ultimately, a feast of the spiritual body, much like taking communion in the Catholic Church. 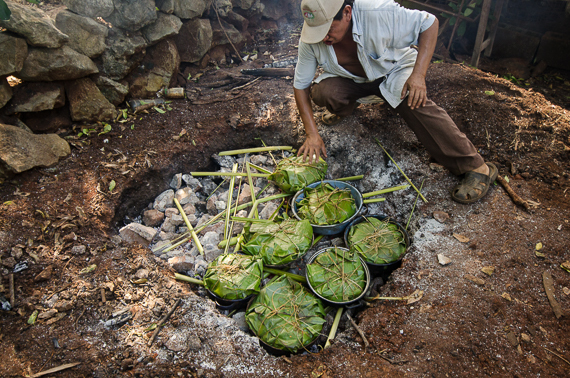 On this day, the women get up at four in the morning to buy and mill dried corn into flour. Soon after, the men rise to start constructing the traditional oven. To build the pibi, or oven, the men dig a large hole in the earth and build a fire inside to heat big stones laid in the ground. While the pibi heats up, the women prepare a masa, or corn dough, and press it into a shape like a piecrust. Next, they fill this form with a whole chicken (chopped and seasoned with a red achiote sauce) and, then, this is sealed this up with more masa. Finally, they wrap the entire thing in banana leaves, tie it off with twine, and place it in the pibi. Each oven pit holds about ten pibipollos, which are carefully positioned on the hot stones, covered with leaves, and sealed with a layer of earth. About an hour-and-a-half later they are removed, some are placed on the altar for the dead and others are shared with friends and family. It is bad luck to blow on the hot pibipollo, lest you blow away the smell. Without this scent, the dead cannot find their way home, and would be unable to feast on the essence of this delicious food. We tried several different pibipollos, and found them all delicious. Their flavor was smoky and spicy, the chicken was tender and the masa was cakelike with a dense crispy crust. They only challenge to enjoying this dish is eating with your hands and politely picking around chicken bones. 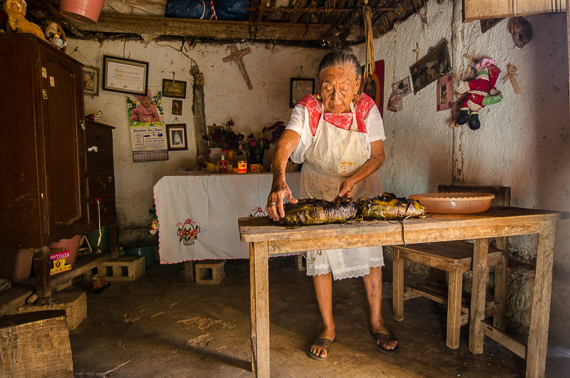 Culturally, Pomuch is a marvel, but the people are what make this town special. Despite all that is happening in Mexico, from modernization, to violence and turmoil, the people of Pomuch are trying to hold onto their traditions. They are a proud Mayan population, drawing strength from their indigenous identity, and this shows throughout their community. As a foreigner, I was warmly received: the locals were both friendly and eager to show me their way of life. In fact, I have never been as kindly treated, or felt more welcome in any rural Mexican town. A testament to Mayan hospitality, we were invited to share meals, explore homes, and to invade their lives with our cameras. We were especially drawn to the grandmothers who regaled us with marvelous accounts, of miracles, duende or elves, and bouts of "the fever." We quickly made new friends, and were ultimately asked to spread the word about Pomuch and its amazing Hanal Pixan. 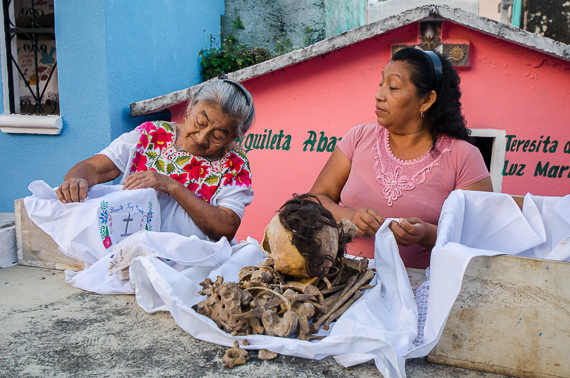 Senioras replacing the linens before washing the bones, the small box is for the bones of a lost baby -- Pomuch, Campeche

Next year for Day of the Dead, I am planning on exploring San Cristobal, Chiapas and meeting the mountain Maya. I am excited, and I remain hopeful that I will feel as welcome and connected to Chiapas as I did to Pomuch. Learning first hand about Hanal Pixan in Pomuch, was one of the most amazing experiences of my life and I would recommend it to any adventurous traveler. So, if you are planning your next holiday and you want an extraordinary experience, look no further than the beautiful and unique Day of the Dead festivals in the marvelous country of Mexico. 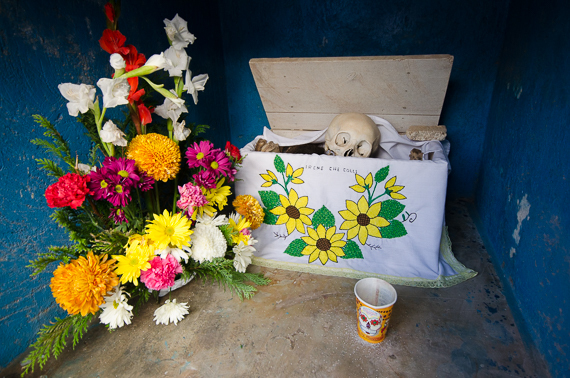