(RNS) Ask Jalon Fowler, a 38-year-old IT specialist for John Hancock Financial Services, what advice she would give to two Muslim friends who will each be running their first Boston Marathon, and this Muslim convert is happy to opine.

“Go easy; stay relaxed,” Fowler said. “Make sure you get to 17 in good shape. Make sure that you have enough in the tank to get through the hills, because that’s the hardest part. But know that when you get to 21, there is such a huge crowd waiting for you, cheering for you so loud, and you’ll feel so much adrenaline that it’ll take you the rest of the way.”

Fowler, who grew up in nearby Methuen and will be running her fourth Boston Marathon on Monday (April 21), understands this year is different. After last year’s tragedy, in which three people were killed and more than 260 others were injured when a pair of homemade bombs detonated near the finish line, Fowler knows she will also be the face of Muslim America when she runs past thousands of spectators.

“I do know some people will say, ‘Hey, there’s a Muslim,’ when they see me,” said Fowler, who wears a hijab. “And by running, I’m saying what happened last year was wrong, I’m against that. And I’m a Muslim. This is what a Muslim is, not what you saw last year.”

Muslims who are involved in this year’s Boston Marathon, as runners, physicians or volunteers, say they want to participate as Bostonians and athletes. But because the bombers were Muslim and many Americans still associate Islam with terrorism, some Muslims involved with the marathon see a responsibility, or a chance, to counter stereotypes of Muslims as violent.

“I’m a Bostonian,” said Firas Naji, a physician who last year led a four-person medical team stationed in a tent one block away from the finish line. “I’m going to be there. Muslims who came to this country share the same values as everyone else. But it takes just a few seconds on the news to change all that.”

Naji, who was born in Damascus, said his Syrian relatives texted him after the bombing to tell him they were praying for Boston.

While Boston’s Muslims acknowledge that many people still associate their religion with terrorism, they also believe that by being involved in events like the Boston Marathon, they are breaking that link.

Chechen brothers Dzhokhar and Tamerlan Tsarnaev are accused of carrying out the attack, motivated by extremist Islamist beliefs and the wars in Iraq and Afghanistan. Tamerlan Tsarnaev died after a gunbattle with police. Dzhokhar Tsarnaev faces the death penalty, if convicted. He awaits trial in a federal prison.

The day after last year’s bombing, Hamza Syed, whose family came from Pakistan to Massachusetts when he was 3 years old, vowed he would run this year. To prepare, he trained by running the Chicago Marathon and wore a “Boston Strong” T-shirt to show his pride for his adopted city.

The emotional charge from that marathon is still with him.

“The amount of love I got from the crowd was amazing,” said Syed. “First people were yelling, ‘Go Syed, go Syed.’ And then after my nametag fell off, people were yelling ‘Go Boston, go Boston.’ To be honest, I got a bigger rush hearing people say ‘Go Boston’ than hearing my name.”

Leanne Scorzoni, who converted to Islam soon after the bombings, will be wearing a special sports hijab for the race. She downplays the prospect of being an ambassador for Muslims but said she still understands that the experience can connect people.

“When Americans see Muslims running, and when Muslims see Americans cheering them on, people realize how united we are,” Scorzoni said.

“As a society it’s important to replace fear and suspicion with knowledge and trust, and we can only do that by getting to know each other,” said Naji. “If more cities were like Boston, we would be in good shape as a country.” 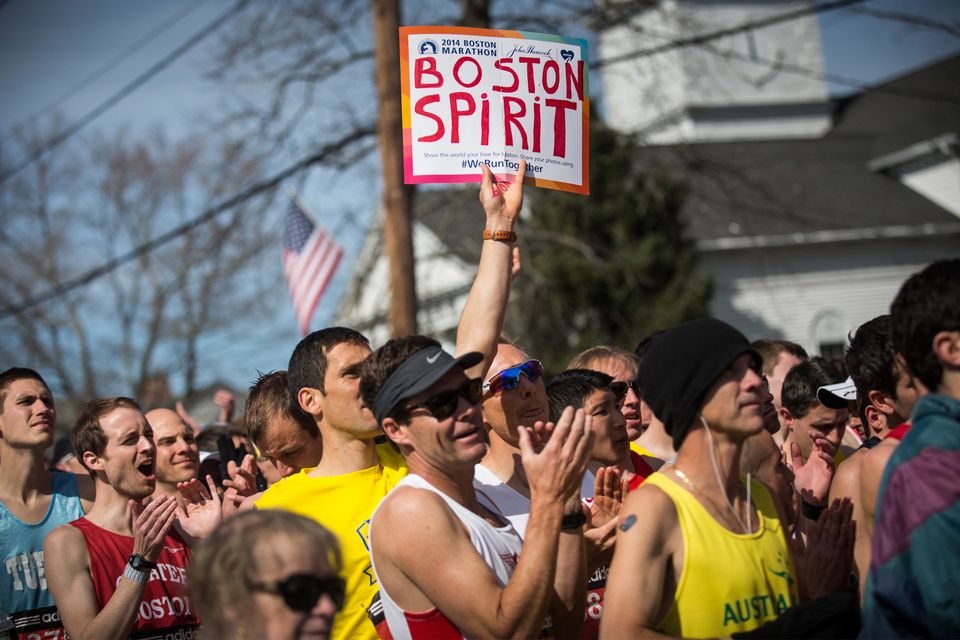 1 / 52
2014 B.A.A. Boston Marathon
HOPKINGTON, MA - APRIL 21: Runners wait for the start gun at the beginning of the Boston Marathon on April 21, 2014 in Hopkington, Massachusetts. Today marks the 118th Boston Marathon; security presence has been increased this year, due to two bombs that were detonated at the finish line last year, killing three people and injuring more than 260 others. (Photo by Andrew Burton/Getty Images)
Getty Images