In case the dark world of Tinder wasn’t quite bleak enough for you yet, there’s now a way for people (i.e., men) to set the dating app to automatically swipe right on (i.e., like) countless numbers of potential partners. How romantic.

The apocalyptic invention is a Google Chrome extension, Botinder, that was ostensibly created as a way for people to sign into their Tinder accounts on their desktops. But the extension, which is unofficial and was not created by Tinder itself, also has a “Like automatically” function that allows you to approve of a potential match without even having to look at the person’s profile. 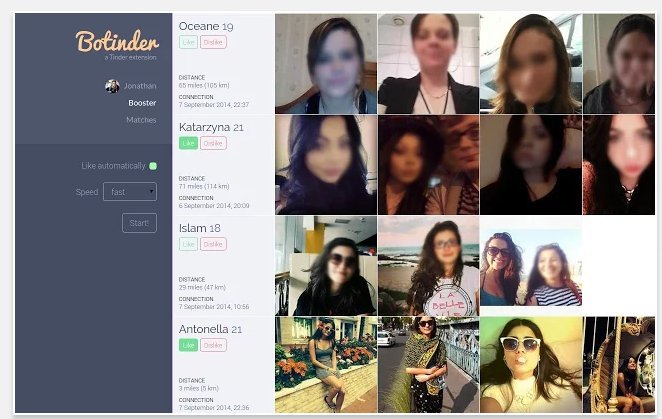 The interface allows users to look at multiple profiles at once (Photo credit: Botinder)

This auto-like function can be set to four different speeds -- “slow,” “normal,” “fast” and “booster!” If you are auto-liking something already, why does it matter at what speed you do it? Who knows?! Here’s what the slow function looks like:

Pretty disturbing, until you consider what the super-fast “booster!” speed looks like:

In fact, at top speed, you can “swipe right” on 50 profiles in around half a minute:

When I told one of my colleagues about this, she asked why anyone would want to match with someone if they didn't even know whether the person was hot or interesting. The answer is that a lot of guys automatically like every single person they come across, so an auto-like function makes a depressing amount of sense.

In fact, the UK Mirror conducted a non-scientific but interesting experiment earlier this year to figure out just how many men were swiping right no matter what. To do so, they created a profile for a fictional 26-year-old man named “James” who had a picture of Cookie Monster for his profile. Despite the “male” and “Cookie Monster” things, a third of all heterosexual men swiped right on James' profile.

And to think they said romance was dead.