Boy George has been turning heads and bending ears for over three decades.

The groundbreaking musician, who released some of the biggest hits of the '80s and has been an in demand DJ since the '70s, is currently on a DJ tour across the U.S. alongside co-headliner Marc Vedo.

We recently caught up with George to chat about life on the road, his thoughts on Miley Cyrus, the reactions to his new look and more.

The Huffington Post: This is your first time DJing in the U.S. in seven years. A lot has changed over that period in terms of the musical landscape. How has your approach to DJing changed along with the times?
Boy George: The term EDM has come to represent a very European style of dance music in America, with the rise of DJs like Avicii and David Guetta, so I was slightly worried that my style would not fit in. I don't play big stadium-style dance but I have discovered, to my delight, that the appetite for real low slung deep house is very much alive. I'm of the opinion that as a DJ you must always play what you love and ignore what's "trendy" because true passion always eclipses what’s fashionable. Quality is always fashionable.

Many people think that DJing isn't a real profession or believe that anyone can just "push play." What's your response to that?
Well, people say a lot of things but real DJing is about thinking on your feet. If you are a festival-type DJ playing the most popular tracks from this week’s Beatport chart then you can pretty much push buttons and allow the audience to dictate the art form. A good DJ brings his personality and taste to the club and giving people what they think they want isn't always that interesting. A difficult crowd will always test your true ability. A lot of today’s up-and-coming DJs have no experience of building a set or a career -- a bit like some of today’s instant pop stars.

What's the biggest mistake a DJ can make mid-set? Do you have any DJing horror stories?
Leaving to go to the toilet or having a conversation as the track is about to end! For myself the worst moments are having the wrong type of people in the club holding up pictures from twenty years ago. If you don't absolutely love "dance music" it's probably best not to come. Seeing bored looking fans staring at you while you DJ is about as horrible as it gets. The clue is in the title: "DANCE MUSIC!"

You've gotten a lot of attention for your new look. How do you feel about the response?
Some people hate the beard but I'm not really that bothered. It's my face. Yeah, it's nice to get compliments on how I look. I'm sure people were saying all sorts of derogatory things before! I feel great and I'm very happy.

As someone who has been in the spotlight himself for having a controversial look and persona, how do you feel about all the drama regarding Miley Cyrus? Are you team Miley?
You have Miley stripping naked at every opportunity and Kanye bringing Jesus on stage and then Gaga posting "Madonna hates Gaga" tweets. One wonders what it has to do with music but people have to find ways to get attention! I guess I find it mildly entertaining like the rest of you!

When it comes to how much the music industry has changed since you first started out, what's the thing you miss the most or you're the most nostalgic for from that time?
I'm retrophobic. [laughs] That's the name of my new dance project -- "Retrophobia." We use lots of vintage samples and give them a new twist. I'm not nostalgic for the past at all except that promoters used to be more hospitable, but that's about it. I feel you should honor and respect your legacy but then seriously get over it. I love now. It's all about now.

You were one of the first very openly queer artists to make it in mainstream music. What was that like? Terrifying? Thrilling? Did anyone ever try to get you to tone down your image?
I came out to my family at 15 so by the time I was in Culture Club I was pretty fearless. I had to keep it to myself because people around me thought it would damage my career but I think everyone worked it out pretty quickly. I think coming out is a very personal thing and I now feel it is an individual choice. If you are not attacking other people then you should be able to keep it private. I think it's always best for one's own soul and personal happiness to come out. The closet is not a joyful place but you must feel safe before you make the decision to go public!

When do you think we'll see a huge gay male pop star? What will have to change for that to be possible?
I hope it never comes down to that. I prefer to live in a world where you are judged on talent and sexuality is completely secondary. There have been many successful openly gay artists -- George Michael, Neil Tenant, Marc Almond -- but the bravest was always Jimmy Somerville. I'm doubtful if we will ever live in a world where sexuality won't be an issue for at least a small minority. Homophobia and racism are part of the human condition.

Is there anything that you specifically look forward to (a food? a city?) whenever you tour the U.S.?

I love Seattle the most and this time we stayed in Alki Beach and people were so sweet. This trip has been a great experience and we have had some bonkers gigs. Dallas and San Francisco stand out but I have seen how good it can be. We had a couple of brilliant gigs in Canada in Winnipeg and Castlegar in British Colombia. I'm a Wholefoods freak and wherever I go in the US I'm straight online looking for Wholefoods and Starbucks -- I love my morning doppio espresso!

Boy George will be spinning this Thursday, Oct. 24 at Pacha in NYC and Saturday, Oct. 26 at Exchange in L.A. 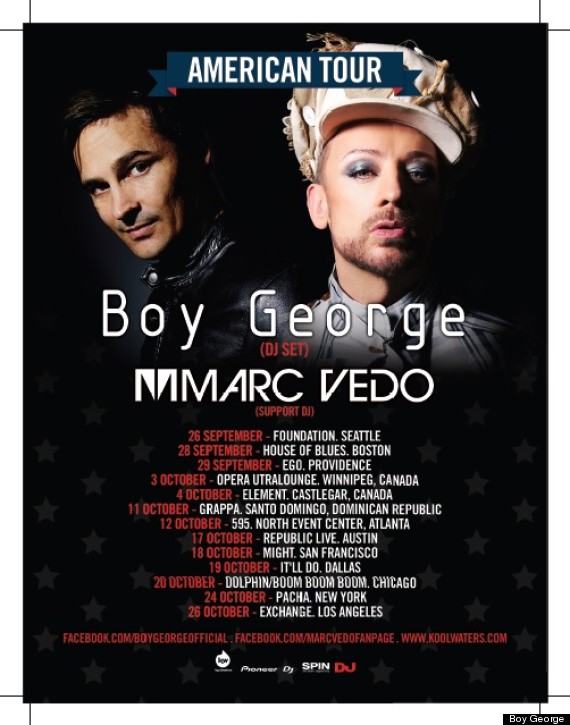