Watch any number of rom-coms and you would get the idea that it's women who suffer most after a breakup. (You know the clichés we're thinking of: the ladies who sulk around in pajamas and take comfort in a carton -- or five -- of Ben and Jerry's.)

But a new survey suggests it's men, not women, who suffer the most when a relationship ends. Polling some 501 singles, UK dating site Elite Singles found that 25 percent more men than women admitted to suffering lovesickness after each relationship, with far fewer guys having to be “really in love” to experience it.

Why is that? Psychologist Wiebke Neberich suggested it might have something to do with the men's overall perception of the relationship. "Men have a propensity to overestimate a woman's interest, meaning that they also get brushed off and suffer from unrequited love more often," Neberich said in a press release.

Check out the infographic below for a full picture of how men and women deal with heartbreak post-split: 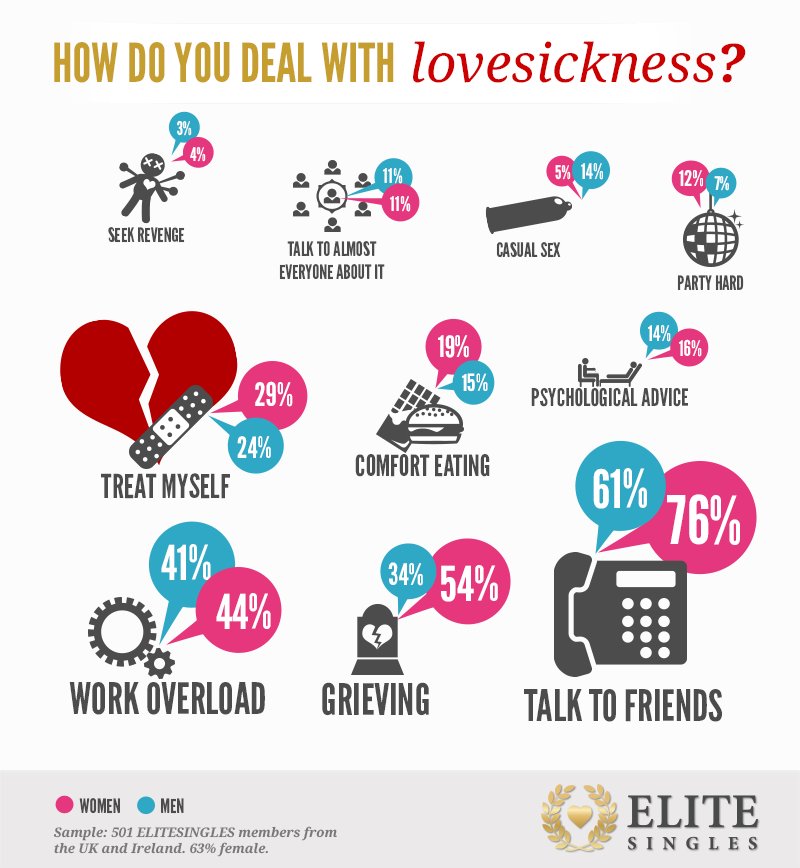 While it's men who cop to taking breakups harder, both sexes agree that having your partner leave you for someone else is the most painful way for it to go down. Eighty percent of respondents said that was the worst kind of heartbreak, while 29 percent said feeling they were being put second to their partner's social life was most painful.

And before you go second-guessing the power of heartbreak, know that science suggests a broken heart really can take a toll on your health. According to the University of Rochester's Christine Thompkins, "broken heart syndrome," or acute heart failure triggered by stress such as heartbreak or the loss of a loved one, is a real condition that can happen to healthy people with otherwise healthy hearts. Its symptoms include chest pain and life-threatening arrhythmias, but it can be treated and reversed.

How To Let Go
More:
divorceheartbreakbreakups
Newsletter Sign Up
A weekly guide to improving all of the relationships in your life
Subscribe to HuffPost’s relationships email
Successfully Subscribed!
Realness delivered to your inbox