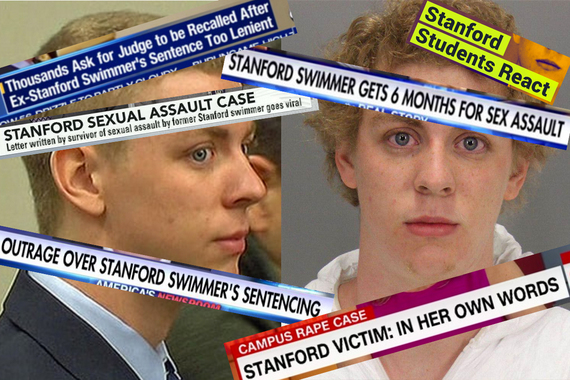 If anyone knows how 20 minutes can make or break a career, it would be athletes who spend a lifetime of daily practice for those few minutes of competitive glory.

For pretty much his whole life, swimmer Brock Turner has been practicing the thoughts, attitudes and actions that have culminated into his career-defining 20-minute performance.

From his father's bemoaning of joyless ribeye to his friend blaming his conviction on political correctness, all evidence indicates that Brock Turner has been swimming in a pool of immense privilege for as long as he can remember; bathed in the confidence that people like him are more worthy than others. Why do we even know that he's a swimmer? As was made abundantly clear in the Stanford case, Brock's status as a student athlete was grounds for an insultingly lenient sentence against felony charges by unanimous verdict.

Brock Turner has been swimming in a pool of immense privilege for as long as he can remember.


Indeed, on a daily basis, society reinforces the condescending belief that his life matters more -- the attention and praise from adults, the fist-bumping of the tight-knit white brotherhood, the social ease of wealth, and the overlooking of his other "minor infractions" because, haha.... boys will be boys.

He's honed his practice of entitlement by learning that the world is his to conquer, cultivating an easy confidence that nearly all problems can be solved with money, power, or charm. A severe lack of empathy has grown alongside this entitlement, because people like Brock don't have to care how others think. As a privileged white male competitive athlete, he defined himself as a winner; losers be damned. Brock Turner has never had to apologize for anything with real remorse. Every day he practiced thinking, "I am better," "This is mine," and "I get what I want."

How do I know this? Because I've seen glimpses of this same mocking, haughty personality in a number of the men who run in the moneyed, fraternizing, bro-tech packs. Everything around them confirms they are the deserving titans who run the world. When the rest of the world pounds on the outside door, we don't even realize there are two more doors inside, solid and gilded, and behind those doors are the handshakes, the knowing glances, and the quiet calls on private lines that dole out the deals. However much you suspect the system is rigged, triple that amount because whether it is nepotism, cronyism, or xenophobia, that's how decisions and transactions are done.

On January 17, 2015, Brock Turner thought he was jumping in the same pool as always. In those infamous 20 minutes, he saw a body that he believed he was entitled to. Perhaps he thought it would be a story to tell the guys later, the piece of trash that he felt and dealt, and everyone would grunt and holler and chest-thump. He didn't realize he was in another pool entirely, one in which two men, two white men, would stand up to him; one in which a jury of individuals he might have otherwise seen as beneath him would stand up to him and convict him; one in which a young woman would stand up to him and so exactingly, incisively and devastatingly shine light onto the truth.

Every athlete has the thought, "Well, all those hours of practice and it's come down to this." In the world of competitive sports, 20 minutes can make or break a career, and Brock Turner's 20 minutes of infamy are no different.

Except that this time, he wasn't playing the game he thought he was. Did the rules change out from under him? Is our society finally draining the water from the pool of privilege that boys like Brock Turner are bathed in from the moment they are born until they are handed their first corporation to lead?

The world belonged to Brock Turner, and he lost it. If you think that's unfortunate, perhaps you should try being one of the rest of us, whom the world never belonged to in the first place.