In 2011, William Tran, a Vietnamese Buddhist monk with the honorable ranking of Highest Buddhist Master, went to the dentist for inflammation in his gums. Antibiotics did not help and when the dentist saw him again, he was so concerned that he personally took Tran to the emergency room.

There, Tran was diagnosed with acute myeloid leukemia and was told that his disease might not be cured. After chemotherapy treatment, a period of remission and then a relapse, his doctors at Cedars-Sinai hospital in Los Angeles, California decided that it was time to investigate transplant options. When they could not find a perfect match for him for a bone marrow or stem cell transplant, Tran’s doctors looked to a relatively new transplantation option for adults with promising results: umbilical cord transplants. Before Tran could receive his transplant from donated and matched umbilical cord blood, he went through another vigorous round of chemotherapy to get him back into remission. 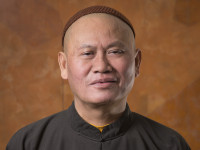 Tran’s transplant was successful and he has been in remission from leukemia for six months. He is back home at his temple in Garden Grove, California, just three miles from Disneyland, surrounded by students, nuns and friends. The Huffington Post met with him and a translator -- a longtime family friend and student by the name of Roy Le -- to learn about what cancer looks like through the eyes of a Buddhist monk.

“After I got sick, my body changed a lot. I lost weight and felt weaker than before. It takes time to recover,” Tran, who is nearly 60 years old and has been studying Buddhism for over 50 years, said through a translator. “But mentally, I feel stronger. I have more confidence in my Buddhism than I did before.”

At his personal temple, where he studies and teaches Mahayana Buddhism, Tran, speaking in Vietnamese, shared six ways that he used his practice to find peace during his process of diagnosis, treatment, transplant, recovery and remission:

William Tran is a monk who lives at a personal temple in Garden Grove, California where he studies and teaches Mahayana Buddhism. Two years ago, he was promoted to the level of “Highest Master” in Buddhism.

1. As a patient, you have to let go now. Letting go means having no attachment.
"I have been practicing Buddhism since I was six years old. Letting go of attachments is part of me. In other religions, the soul is permanent. In Buddhism, it’s not. Let’s say you light a candle and there is a flame. If you transfer the flame to another candle and blow out the first one, where did it go? We don’t know. It’s the same thing when we die. You were different 10 minutes ago from now. Every time we have a new experience, our soul isn’t the same as it was before."

2. Don’t deny the disease. Accept it as fact.
"Face reality. Deal with your stress right now. Doctors can take care of the body, but they cannot take care of the mind. Accept what you have right now. Face it directly and deal with it. If you accept the facts and ask for help, your mind will calm down. The medicine will kick in."

3. When you’re faced with a crisis, believe in your own religion, God or morals.
"Don’t start questioning now. Believe in morality and what your good deeds are. And you have to believe in yourself. This is really important. You have a lot of knowledge and power. All people have the potential for something great. For a great accomplishment."

4. Believe and trust in your medical team. Follow their instructions.
"We can deal with the side effects of the drugs with our minds. The doctors are the professionals. Trust them. It is a misconception that Buddhists believe that when you donate part of your body (blood, bone marrow) that your body is no longer intact and that you will not have a full rebirth in your new life. We believe that donating your body is the highest level of Buddhism. Donate anything. It’s the right thing to do. The key is you do it for nothing in return -- just to help people."

5. Meditate.
"When you meditate, your body produces endorphins. You produce less cortisol --that’s the bad thing that creates a lot of stress. This is one way to calm yourself down and let your body heal along with the medication. I practiced meditation every day and I did not have problems with nausea or vomiting during chemotherapy. I ate double what I was expected to!"

Meditation also helped me psychologically through my treatment. It helped support me. It helped me accept my fate. "Accepting your fate doesn’t mean that you give up. It means facing your reality. Stand up and fight it. You don’t just give up. When we say we accept our fate that means we face the facts right now and we will deal with it."

6. When confronting the unknown or the fear of relapse, live in the present.
"To practice meditation, you have to live in the present. [Your disease] might come back and it might not. Don’t live for the future. Plan for the future. We still plan for the future in the normal ways in life. But we are all going to die. If someone doesn’t die of cancer it could be heart disease or a traffic accident outside. We have to die somewhere. We don’t know when. So we try our best."

As told to Sasha Bronner. This interview has been edited for length and clarity.

Do you have a story about cancer and emotional wellness you'd like to share? Email us at healthyliving@huffingtonpost.com to share your thoughts in your own words. Please be sure to include your name and phone number.