Of the more than 60,000 people who are estimated to attend the Burning Man arts festival in the Nevada desert next week, several hundred of them will wander into a Shabbat dinner next Friday night for a taste of modern Judaism at its most eclectic.

Jay Michaelson, a well-known rabbi and LGBT activist, will co-lead the Shabbat service at Milk & Honey, a camp of roughly 75 Burners that is embedded in Jewish tradition but welcomes spiritual seekers of all types. Originally called Sukkat Shalom, meaning “shelter of peace” in Hebrew, Milk & Honey and its Friday Shabbat service will provide an inclusive and ecstatic experience of Judaism that Michaelson says is lacking in more traditional places of worship.

Many who encounter Judaism in the synagogue environment leave feeling alienated if they don't meet a certain standard of observance, Michaelson said. As a result, they opt out or choose not to participate fully in the service.

“They might not know this particular Hebrew prayer or ritual, and that’s infantilizing," Michaelson told The Huffington Post. “That experience is not really appealing today, especially for people who have grown up with social media and other participatory experiences all the time."

Becca Grumet, a Jewish graduate student from Los Angeles, is attending Burning Man for the first time this year and will be staying with Milk & Honey. Despite attending Hebrew school as a child and studying at a Jewish college for her graduate work, Grumet says she frequently feels alienated in traditional Jewish spaces.

Burning Man -- and Milk & Honey, specifically -- is another stop on her journey to find, as she said, "the thing that's going to grab me spiritually."

"I'm going from place to place waiting to be inspired. It's happened culturally but not spiritually yet," Grumet, who went on the Birthright trip to Israel in 2012, told HuffPost. "That's what I'm hoping for [at Burning Man]."

Michaelson has been attending Burning Man for nearly 15 years and was part of an initial group of Jewish Burners who hosted the first Shabbat dinner at the festival in 2002. The tradition has been carried on by Milk & Honey since the camp’s founding in 2008.

“Shabbat was a way for us to give back,” camp co-founder Nat Manning told HuffPost. Manning is not Jewish but met his fellow co-founder, Nathaniel Lepp, who is Jewish, while the two were enrolled in a contemplative studies program at Brown University.

Last year over 500 people showed up for the Shabbat dinner, he said. The group decided to change its name to Milk & Honey last year to make the camp more inclusive of a multi-faith community. “It was founded on interfaith work with a lot of Jewish influence,” Manning said, “but it’s really about building connections across traditions.”

The Friday Shabbat service is free and open to all. The several hundred who find their way to the camp’s giant geodesic dome for the service come from a range of religious and spiritual backgrounds, Michaelson said.

Those who do identify with Judaism run the gamut from what Michaelson describes as “crunchy Jews” to Israelis who aren’t particularly religious but come to the service to “touch base with the Jewish tribe.” There’s also a handful of “religious Jews” -- and even some Orthodox Jews -- who show up for the service despite its unorthodox nature.

The first Burning Man Shabbat dinner set the tone for the kind of “radical self-expression” that Michaelson said is a core component of the tradition -- and of the festival at large.

It started to rain as the service began -- an uncommon phenomenon at the late August desert festival. “Suddenly there was a huge whoop of joy and people around us got naked and started running around in the mud,” Michaelson recalled.

Milk & Honey’s Shabbat service continues to expose festival-goers to a participatory and “radically inclusive” model of religious practice. There will be "ecstatic dancing," wordless melodies and ample opportunities for sharing personal stories among the crowd. After the service, the group will eat their fill of a massive vegetarian meal cooked by volunteers. The whole event will conclude with a world music dance party, Michaelson said.

“Hopefully we as part of the spiritual contingent [at Burning Man] can help create what it’s really about -- transformation, community and radical self-expression.” 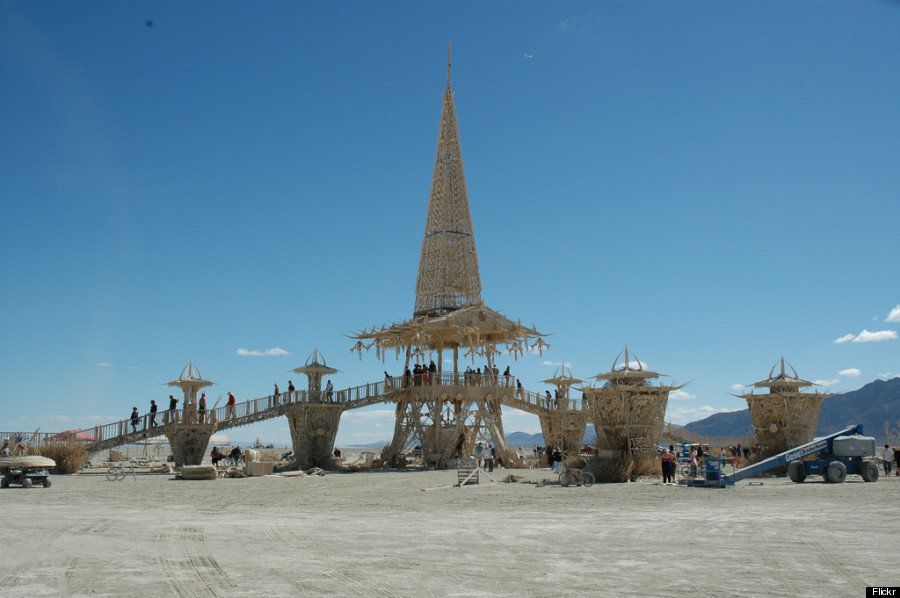