A small group of Cambodians -- some of whom only recently learned to swim -- is doing zero-visibility dives to rid the country's waters of bombs. Photographer Charles Fox has documented their journey in an incredible new photo series that beautifully captures these unexploded ordnance divers trying to make their nation a safer place.

Decades of conflict in Cambodia have made it one of the most densely mined countries in the world. The country has worked hard to eliminate these threats, with numerous groups clearing Cambodia of mines and significantly reducing the death rate from these weapons in recent decades.

It's not just the land that is filled with unexploded bombs, but the waters as well. To combat that problem, the Cambodian Mine Action Center and Golden West Humanitarian Foundation formed the nation's first elite salvage dive team tasked with clearing rivers of unexploded ordnance, or UXO. 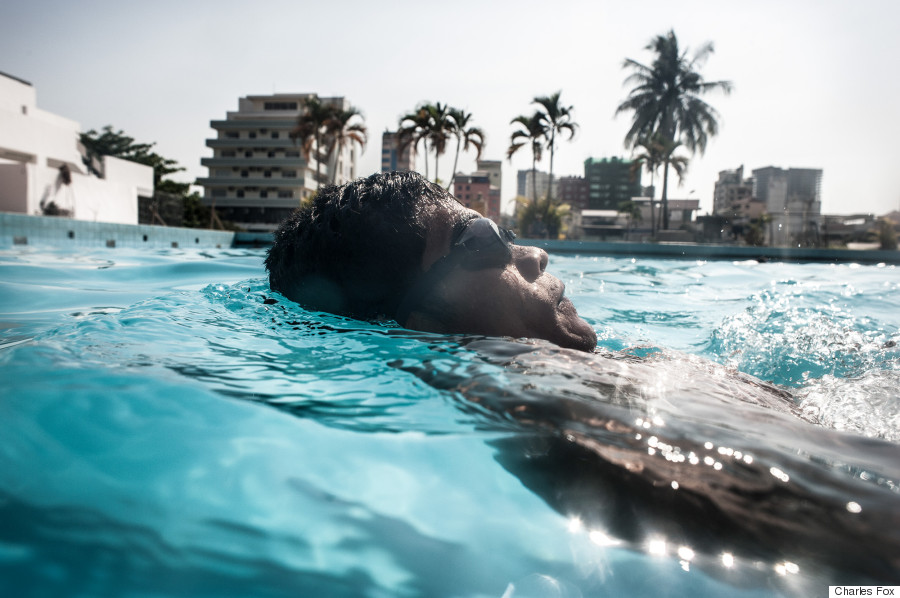 Fox started photographing the unit after seeing a small item in the local news. He got to know the nine members as he documented their progress.

"Most of them couldn't swim at the beginning, and none of them had ever dived before," he told The WorldPost.

The divers face dark, difficult conditions and the hazards that come with handling unexploded ordnance. "If that UXO goes off in the water there's very little chance they'll survive," Fox said. But despite the risks, the divers approach the job with a humble dedication.

"They haven't changed, they're just still these really down to earth guys who do an incredibly dangerous job," he said. "This group of guys who couldn't even swim volunteered to do this work and two years down the line, they're pulling stuff out of the river."

The team this week led a search that uncovered a 500-pound bomb left over from the Vietnam war.

Fox was awarded a space at the Brunei Gallery in London to exhibit his work in July. He's currently raising money on Kickstarter to pay for making the prints for that show and for an exhibit that will take place in Phnom Penh, where the divers will get a first proper look at the images of their success.

Read more about the project here and see Fox's website for more of his work.

Charles Fox
The team received a call and found a large piece of UXO sticking out of the water in Kratie Province, Cambodia.
Charles Fox
Divers Leng Channak (background) and Prak Hean (foreground) sit aboard a boat heading to the island of Koh Rong off the coast of Cambodia as part of a training exercise.
Charles Fox
Members of the dive team head out on the Tonle Sap river, where years ago several boats carrying munitions were ambushed on the river by the Khmer Rouge. Working with sonar, the divers have been trying to locate the sunken boats.
Charles Fox
Diver Piseth Dara (left) sits on the edge of the dive boat as diver Lorn Sarath returns to the surface. The divers recently recovered their first piece of a large UXO -- an American MK82 bomb that weighs 500 pounds. The team used an inflatable lift bag which they attached to the bomb 23 feet below the water's surface to raise it from the river more than 40 years since it was dropped.
Charles Fox
The divers have learned to dive in zero visibility conditions to replicate the pitch black conditions of the Mekong and Tonle Sap rivers. The team wears blackout masks in training to mimic these hostile environments.
Charles Fox
Dive team leader Sok Chenda climbs aboard a boat after a dive in the Tonle Sap River.
Charles Fox
Members of the dive team load the cut sections of a large bomb they retrieved from the Mekong River. The bomb's head and tail sections are removed remotely, removing the threat of detonation.
Charles Fox
Members of the dive team and a U.S. Army diver load an inert bomb bomb onto a boat as part of a training exercise off the coast of Cambodia. U.S. Army divers have visited the team twice to help with training and equipment.
Charles Fox
Journalists stand in line to photograph the American MK82 bomb the divers pulled from the river.