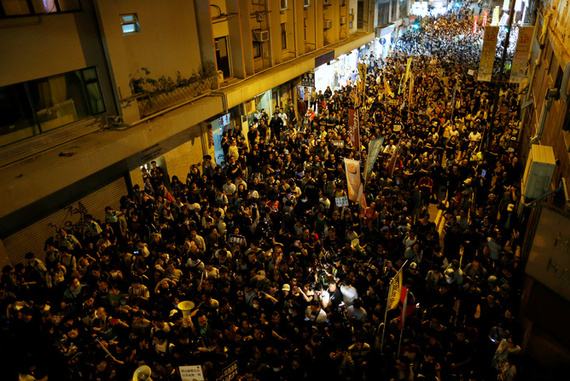 Demonstrators protest against Beijing's interference over local politics and the rule of law. Tyrone Siu/Reuters

This article is part of the Democracy Futures series, a joint global initiative with the Sydney Democracy Network. The project aims to stimulate fresh thinking about the many challenges facing democracies in the 21st century.

Today, this vision is being undone by the furious political winds that have blasted the city since the fall of 2014, when simmering economic and political tensions erupted during the Occupy Central uprising.

Movement co-founder Benny Tai was right: with a finger firmly placed on Hong Kong's political pulse, he predicted at the time that Beijing's actions would stir up a new "era of resistance" within the territory.

Constitutional doubts are mounting. Since the handover of the former British colony to China almost 20 years ago, Hong Kong's status within China's sovereignty nexus was supposed to have been assured under the "one country, two systems" framework laid out by Deng Xiaoping in Hong Kong's mini-constitution, the Basic Law. Deng's vision granted Beijing sovereignty over the territory while allowing the city to retain a high degree of autonomy.

China's sovereignty over Hong Kong is now moot. In recent months, the flimsy foundations of its autonomy have been exposed by a series of dramas.

The heavy-handed attempts by Beijing to erode academic freedom at Hong Kong's most prestigious universities is an example. So, too, is the rapid deterioration of press freedom in a once-boisterous media scene. The case of booksellers who were "disappeared" earlier this year equally raised the spectre of extra-territorial kidnapping by Beijing's security apparatus, accompanied by whispers of its covert operations on Hong Kong's soil.

Political instability is spreading. Beijing, in an extraordinary move, recently barred two pro-independence lawmakers from taking their seats in Hong Kong's Legislative Council, a display of political might that further undermines the foundations of the territory's independent judiciary.

A business class that's on Beijing's side

Two people particularly well versed in Hong Kong's political affairs are Anson Chan, the first woman to be appointed to the role of Chief Secretary in the territory, and Martin Lee, regarded as the father of Hong Kong's democracy movement.

Key public figures in Hong Kong, Chan and Lee recently toured Australia and New Zealand, where they urged the region to stand by the territory in its fight for democracy.

During their short time in Sydney, they agreed to a sit-down with me at a popular Chinatown restaurant.

Over bowls of soup and pots of jasmine tea, Chan and Lee explained their political visions and voiced their anxieties about the present state of the territory, and its decaying relationship with the Chinese mainland.

Chan and Lee told me that the delicate balance within the "one country, two systems" is now tilting in Beijing's favour. The swing is partly due, Chan said, to Hong Kong's "disappointing" economic "levelling down" since 1997, certainly compared to China's skyrocketing growth into the financial stratosphere. Hong Kong is slowly but surely being absorbed into China's economic orbit.

When I pressed them about the political implications of this growing dependency, Lee noted the disquieting rise of a business class in Hong Kong that is "100 per cent" on Beijing's side. It confirms the spectacular success over the past 30 years of Beijing's strategy of encouraging Hong Kong's business class to invest in mainland enterprises, so that in due course they became "financially and economically dependent on China".

"Money talks loudest," he continued, lamenting that Hong Kong is being tucked snugly in Beijing's pocket. Lee pointed out that Beijing's economic calculations are not limited just to Hong Kong. He noted how the hands of China, in its bid for global influence fuelled by a relentless appetite for "money, money, money", are "spreading to all five continents". Lee told me that he nevertheless questions the sustainability of the "China model", especially when it is measured in power terms.

As our conversation unfolded, it struck me that Lee's vision of democracy as the twin of capitalism bears more than a passing resemblance to the teleology of Francis Fukuyama's "end of history". Why is the model of capitalist democracy necessarily a cure for the world's ills, and why will it in the end reign supreme?

"If you want capitalism," he said, "you need the rest, including freedom of speech, the whole thing that comes in the package."

Shortly after we met in Sydney, proof of Beijing's far-reaching economic muscle came during Chan and Lee's visit to neighbouring New Zealand, when their meeting with Deputy Prime Minister Bill English was abruptly cancelled, purportedly due to the "diplomatically sensitive" nature of their visit.

During our remaining time together, Chan emphasised that she places her bets on Deng Xiaoping's blueprint as the best path forward for Hong Kong politically. She said that if Beijing will "get back to one country, two systems [and] allow us to have one man, one vote", then the formula will demonstrate to China that "the system works", so safeguarding Hong Kong from future encroachments.

Stress tests of that position are now happening fast. Political schisms in Hong Kong are growing. In recent weeks, even in the normally staid parliament, striking scenes have emerged of fiery pro-independence legislators hurling derogatory slurs and staging feisty protests in the direction of the mainland. The rise of a more contentious strand of politics in the territory highlights the precarious political reality of Hong Kong in light of Beijing's recent predatory air.

The grim truth is that the territory's Legislative Council is now teetering on the edge of paralysis, and facing a political showdown among its factions. Nothing less than the Legislative Council's institutional authority hangs in the balance.

Not only that, but Hong Kong's current Chief Executive, CY Leung, is widely scorned as a Beijing stooge. His meek acquiescence to his sovereign overlords is similarly corroding the authority of the territory's highest office.

Heightened speculation that further institutional deterioration within the territory might risk action by Beijing recently became a reality with the case of the two young lawmakers who were barred from Hong Kong's Legislative Council, despite demonstrations in the streets to support them.

The fruits of democracy

Considering the enormous pressure generated by these present-day trends, I asked Chan and Lee if any bright spots remain in Hong Kong's rapidly shrinking autonomous sphere.

Chan replied that the territory remains an indispensable conduit to global markets. Its gateway role necessitates the free flow of digital information across borders. This factor, she explained, was, and remains, the key to Hong Kong's past and future success as both a domestic and international platform for global capital.

"Precisely because no Chinese city" can offer Beijing what Hong Kong can, she told me, Beijing has to tread lightly in any future crackdowns. Chan's thinking echoes public statements made by Zhang Dejiang, National People's Congress chairman, who in recent months has spoken soothingly of Hong Kong's unique business advantages and the way they remain unduplicated by other Chinese cities.

It may be that Chan is right. Perhaps Hong Kong will retain its strategic advantages: the rule of law, unrestricted flows of information and connectivity with the rest of the world that remains second to none. Yet Hong Kong's fierce rival Shanghai currently jockeys to supplant the territory as China's pre-eminent financial centre.

And Hong Kong's formerly raucous digital media landscape is being brought to heel by the snapping up of assets by mainland tycoons. Its once-vaunted press freedom has swiftly tumbled down the ranking list of Freedom House in recent annual reports.

Facebook and Google are meanwhile rumoured to be positioning themselves to enter the lucrative Chinese market. Things seem hopeless. But are they?

Multinationals may well find censored flows of information on the Chinese mainland unproblematic to their business models, but Chan's and Lee's defiance is striking.

As we prepared to say goodbye, the pair made clear their dogged defence of the promises laid out in the Basic Law. Lee had the last word. The territory remains a rare terrain in China, he said. It currently enjoys no free and fair elections. The rule of law is under attack. So is its vibrant civil society.