It is now 2016, the presidential primaries are beginning to close in, and it seems like each Democratic candidate is fetching for the endorsement of "Prominent DREAMers" to boost their immigration advocacy street credit. First Clinton, then Sanders, then O'Malley, and then Clinton again.

But as we enter the next election season, the parade of endorsements raise a question of our movement, our power, and how change happens today. We didn't win DACA by stumping for Obama. We sat-in at his offices and shut them down until we got our executive order. It was only through repeatedly shutting down his deportation agency that we won its expansion.

Individuals who have gained prominence from their part in advocacy may advance their careers through blanket endorsements, but it's unclear how that advances the lives of the undocumented communities currently living in the United States that are being spoke for.

Many of us who continued organizing since the failed DREAM Act have been trying really hard to leave the ghost of the DREAMer behind. We have come to understand that the self proclaimed DREAMer identity carries a heavy model minority, anti-black, anti-solidarity meaning that few if any of us could ever live up to or ever wanted to. It often ignores the oppressive structures that are purposely put in place to criminalize, incarcerate, and exploit us. Structures that have been created by "progressive" democrats, such as Hillary Clinton.

I'm not writing to evaluate the actual candidates because if Obama proved anything, it's that they can say one thing and do another once elected. But some of their records have to be highlighted if we're going to have to hear about them being for us. Hillary has a legacy of anti-black policies that either her, or her husband (Bill Clinton) supported in the 90's--not only that, but she is also responsible for destabilizing Central America. During her role as secretary of state Hillary helped carry out the coup in Honduras that later led to a rise in violence in the country. Her actions contributed to the child refugee crisis in where many children and women fled Central America to seek refuge in the states, only to end up being criminalized by the Obama administration. As if it wasn't enough, Hillary had the audacity to place the blame back onto refugees themselves when she made this following statement; "They should be sent back as soon as it can be determined who responsible adults in their families are, because there are concerns about whether all of them should be sent back."

We should be able to look at the bigger picture, and be more strategic about the way we handle relationships with elected officials/presidential candidates who should be serving us, not the other way around.

As undocumented people we're entitled to our own political ideals and beliefs, but we're not entitled to endorse a candidate on behalf of a whole entire population, no matter how relatable to our issues a candidate may seem. We have to remember that it has been a Democrat who proclaimed to be for immigrant rights that has brought us the most deportations in U.S. history! Furthermore, endorsing candidates only displays the lack of solidarity towards people in countries that have been robbed of their resources and independence through either war, or foreign policy enforced by the U.S.

Moreover, making these type of endorsements strips us of our own autonomy, power, and decision making when it comes to the liberation of immigrants in this country. To be liberated means to live without Immigration and Customs Enforcement in our cities, to live in a nation without borders, in a nation that understands the flow of migration, a nation that doesn't enforce foreign policies on other nations so that slave wages advance the capitalist agenda that not only harms immigrants but citizens as well. For years we have tried to build undocumented power that can actually hold officials accountable either when they attempt to deport us or when they attempt to deceive us with false promises. In the Movement for Black Lives, they had a hashtag #WorkForThisVote but we're not doing the same and it is diminishing our power.

To me, I endorse the undocumented youth, the trans and queer leaders, the people with records who these politicians might talk about but will never bring on stage. I watched the latest round thinking, whatever happened to the movement phrase "All power to the people?"

Endorsing and standing by those who are most vulnerable--those who are being criminalized, abused, deported, and physically/mentally mistreated should be key into building and opening the doors toward power and real solidarity.

No politician deserves the praise that is being given to them through these endorsements. When the duty of movement leaders and the duty of elected officials is to serve the people--the only endorsement they should be getting is our pressure. Our movement will not be co-opted by any politician, we're not here to further their agenda or to turn out votes for, we're not political toys you can pull out of your toy box whenever you feel the need to, we're immigrants demanding nothing more than to be free. 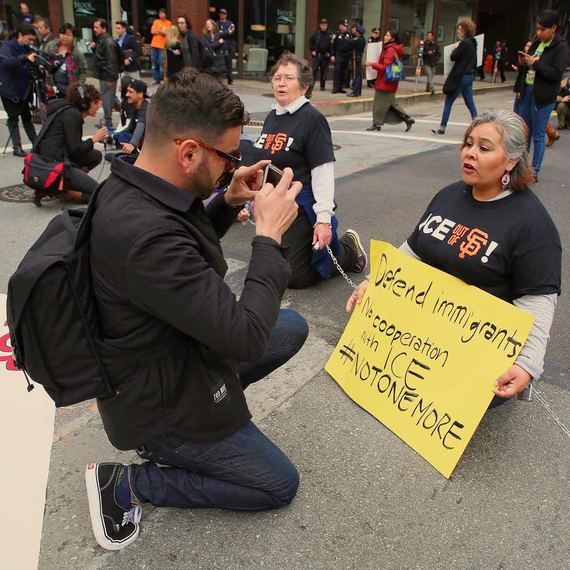 Luis Serrano at the ICE Out of SF rally that took place in San Francisco. (Photo by Jesus Iniguez)